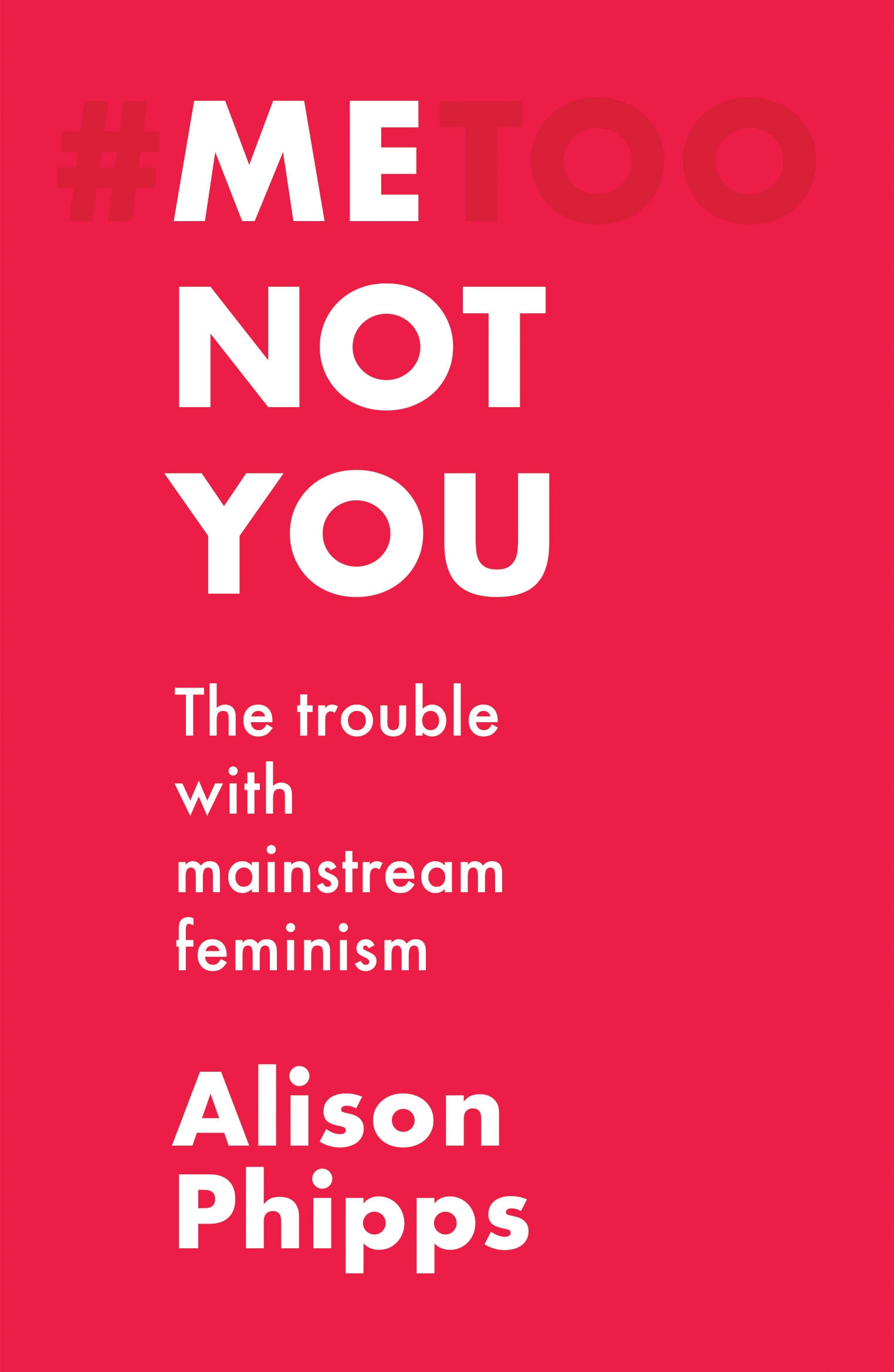 This is the first of a series of blogs I will write following the webinar on my book Me, Not You: the trouble with mainstream feminism. This was broadcast on April 7th to over 100 attendees, who asked some fantastic questions! Because I didn’t get a chance to answer all these during the session, I thought I would answer some of them now. This first piece covers a couple of related questions, pertaining to reactionary trans- and sex-worker-exclusionary feminisms. I deconstruct these feminisms in detail in Chapter Four (‘The Outrage Economy’) and Chapter Six (‘Feminists and the Far Right’) of the book, arguing that they intensify the political whiteness of the mainstream. Reactionary feminism turns mainstream feminist narcissism into an ‘us and them’ mentality, and the mainstream will to power becomes necropolitics that actively targets more marginalised people. Two of the questions asked during the webinar have prompted me to elaborate: on how the exclusion of sex workers and trans people is specifically classed and raced, and how trans- and sex-worker-hostile feminisms are connected (and these two matters are also closely linked). I am grateful for these questions, as they allow me to expand arguments I had limited space for in the book. This piece will probably make most sense to those who have read the book, but I hope it will also be clear and interesting to others.

As I say in Me, Not You, the class and race politics around sex workers and trans people is both symbolic and material. First, there are the demographics: women of colour and trans people are over-represented in the sex industry, and trans women of colour in particular are disproportionately likely to sell sex. And although there is relative marginality and privilege within these categories, sex workers and trans people (and people who fit both these descriptions) often occupy marginalised economic and social positions. They are among the many workers who make up the gendered and raced global proletariat and precariat; they survive at the sharp end of neoliberal economies and austerity regimes and are often criminalised for doing so. In necropolitical systems, trans and sex-working bodies have high vulnerability to premature death through state neglect or violence. As Sophie Lewis argues, these groups are treated as ‘bare life’ by police and courts – they are not seen as deserving of justice or protection (unless this is the paternalistic ‘protection’ of moral panic, which does not protect them at all). This sits in sharp contrast to the privileged white women who dominate mainstream feminism, whose protection is the insignia of white supremacy (even if it does not always translate into formal justice). And the narcissism of mainstream feminism – the ‘me, not you’ of political whiteness – means that women not made in the image of bourgeois whiteness are rarely represented.

Symbolically, sex workers and trans women are disapproved-of women who challenge bourgeois gender norms in various ways. This makes mainstream feminism stingy with its solidarity, while more reactionary feminism actually treats these women as the enemy. Reactionary trans- and sex-worker-hostile feminism is concerned with policing the borders of feminism and womanhood: as I say in Me, Not You, neither the ‘unnatural’ or the ‘unrespectable’ woman can ever be a real woman. Instead, their bodies are sites of judgment and disgust. Sometimes they represent a hyper-femininity which is seen as sleazy and fake: the association between anti-trans and anti-sex-work feminism peaks in the description of trans women as ‘pornified’ representations of ‘real’ women. As Lewis says: ‘they think that trans women and sex workers are pornography. They look at us and they see men, contamination by men, rape.’ As Lewis’ quote also implies, these are women who are ‘too much’ woman and not enough. In reactionary feminism, trans women and sex workers are tainted by association with men: sex workers become one with their clients; trans women become men themselves.

These depictions of trans women and sex workers, with their ‘excessive’ bodies and sexualities and failure to be properly gendered, sit alongside, and draw from, similar ones which are more explicitly classed and raced. For instance, of the working class ‘chavs’, bodies spilling out of their clothes, who are afflicted with uncontrolled fecundity. Or the sexually aggressive Black man and his counterpart, the Black woman who is always ‘up for it’ and therefore cannot be raped. These constructions have long histories rooted in capitalist exploitation and colonial conquest. Hortense Spillers describes how the ‘thingification’ required by slavery separated sexuality from subjectivity, reducing bodies to flesh and making them both threatening and pornographic (and designed to be mutilated and killed). Post-abolition, these processes continued, shaping Black people’s relationship to the criminal punishment system (as both complainants and defendants), and meaning that Black women who did not sell sex to survive were likely to be associated with prostitution nonetheless. In the 21st century, Black trans women are especially likely to be profiled as sex workers by law enforcement. As I write in Me, Not You, the phrase ‘walking while trans’ was popularised after activist Monica Jones was found guilty of ‘manifesting prostitution’ for accepting a car ride from two undercover police officers in Phoenix in 2014.

Monica Jones’ experience illustrates how transphobia and whorephobia intertwine with other processes of classed and raced disgust. Disgust is a way of defending territory: whether this is national boundaries or economic entitlements, claims to legitimate womanhood, or public and political space. Like other forms of bigotry, trans- and sex-worker-hostile feminism is a border control project: the middle class white woman who calls the police on Black kids barbecuing in the park is adjacent to, or sometimes synonymous with, the reactionary feminists who want their streets swept clean of sex workers, and their public toilet doors slammed in the faces of women who are not ‘real’. To hide this bourgeois disgust, reactionary feminism goes on the defensive: trans people become self-involved millennials and sex workers ‘happy hookers’ not qualified to speak on their own lives or the economic and social relations that shape them. Against them, reactionary feminists wield the ‘survivors’, ex sex workers and detransitioners whose genuine trauma fortifies a disingenuous politics of concern. But really, this feminism is preoccupied with its own actual or potential victimisation. Sex workers cause the rape of ‘respectable’ (white, bourgeois) women by pandering to male sexual entitlement. Trans women commit rape against ‘natural’ (white, bourgeois) women, or ‘rape’ their bodies symbolically by attempting to ‘change sex’.

Black feminism tells us that there is a matrix of race, class and gender domination here in which one category cannot be understood in exclusion from the others. This articulates what Lugones calls the ‘coloniality of gender’, the system in which white bourgeois gender, exported by colonial capitalism, is the norm and ideal that justifies extractive and violent economic relations. For Lugones, the modern gender system has a ‘light’ and a ‘dark’ side, and on the latter, people of colour are de-gendered ready for conquest, abduction, exploitation and eventual disposal. Because of this, Christina Sharpe and other Black feminists have called Black bodies already transgendered and queered: racism overdetermines them with meaning but divests them of normative markers. Binary bourgeois gender appears in sharp relief against what Spillers calls the Black bodies ‘ungendered’ in the hold of the ship, where captivity de-domesticated and de-kinned, unmade cultures and quantified all bodies under the same property relations and rules of accounting. Bourgeois gender also appears in sharp relief against the criminals’, ‘prostitutes’, ‘thugs’ and ‘birthers of terror’ that supplant girls and boys, men and women, in what Sharpe calls the contemporary anagrammatics of Blackness (the process by which ‘grammatical gender’ falls away). There are related processes of ‘falling away’ at work in the cultural differentiation of class, as the experiences of working class women (many of whom are also women of colour) who report rape will attest.

Transphobia and whorephobia are fruits on this tree of capitalist-colonial gender. Trans and sex-working bodies join the ranks of other deviant ones, seen as inappropriately gendered and over-sexed in ways which ultimately express their relations to capital. Lewis argues that disdain for trans people and sex workers is disdain for bodies not easily assimilated to capitalist production and reproduction. For her, trans- and sex-worker-hostile feminisms are united by ‘the myth that says that we can and must protect our selves and bodies from commodification and technological contamination, the better to do healthful productive work.’ Sex-working and trans bodies tend to exist on the economic margins, overlapping with the working class bodies capitalism delights in exploiting and alienating via ‘healthful productive work’, overlapping with the bodies of colour (and especially Black bodies) that were never meant to survive. The reactionary feminist border against these bodies is defended with the artillery of gender. This is naturalised as ‘sex’: reactionary feminists are female rather than feminine (which they abhor); reactionary feminists are ‘real women’, unlike the Others. They claim the ‘authentic’ gender that is a key tool of capitalist-colonial domination: ‘unnatural’ and ‘unrespectable’ women can never be real women.

To claim your exclusive 50% discount on Me, not you: the trouble with mainstream feminism, please enter code OTH583 at the checkout on the MUP website: https://manchesteruniversitypress.co.uk/9781526147172