By Justin A. Joyce 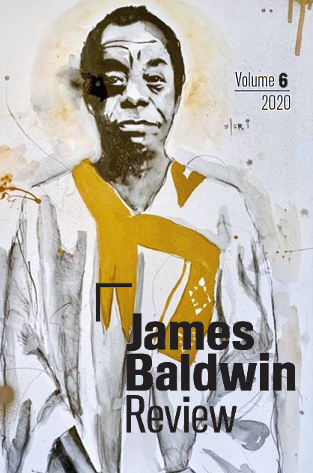 The cover for volume 6 of James Baldwin Review comes to us from pioneering Atlanta-based artist Dr. Fahamu Pecou, whose portrait of African American author James Baldwin, Eleri (Witness), evokes Baldwin’s understanding of himself as primarily an observer, a commentator. Baldwin, in short, envisioned his role to be that of a witness. Baldwin’s sense of artistic imperative, his understanding of his duty and role as a literary artist rested upon an impetus to tell the truths, especially the darker, less flattering truths about our history and ourselves. As Baldwin himself memorably put it, “Not everything that is faced can be changed; but nothing can be changed until it is faced.”[1] Baldwin imagined his words would make an impact in the world by exposing the connections between our histories, our present, and the futures we chart. In a 1984 interview, Baldwin expanded upon his self-designation of this role: “I am a witness. In the church in which I was raised you were supposed to bear witness to the truth. Now, later on, you wonder what in the world the truth is, but you do know what a lie is.”[2]

In May of 2020, especially here in the United States, the difference between the truths of science and the false claims, abdication of responsibility, and snake oil cures trumpeted by our presidency may well be the difference between life and death. As we struggle with these facts and our collective fates, we are facing the bleak truth of Baldwin’s prescience: many of the horrors of the COVID-19 pandemic we will not be able to change. The assault on truth, science, and humanity marring our abilities as a global community to face these horrors, though, will be changed only once they are seen. Seen, that is, not as accidents of history or acts of a higher power, but instead recognized as the harvest we now must reap from the seeds we have sown.

As we look to the life, works, and legacies of James Baldwin as an aid in the cascading crises that envelop us amidst a global pandemic, we proudly present an early release of the introduction and table of contents for the next volume of James Baldwin Review—volume 6 (2020)—due out this autumn. We are taking this unprecedented step for this year’s volume, quite simply, because the facts are changing so rapidly. Not months, not weeks, but days, nay even sometimes within hours, the death toll rises exponentially. How many more times the bell will toll, how many more Trump lies will be told, before volume 6 is released? We can not know. We hope, though, in the urgency of this moment, to stand as a witness and proclaim, “it happened like this,” so that our words can inspire change.

Volume 6’s full introduction, “To Minimize the Bill That They Must Pay,” penned by JBR Managing Editor, Justin A. Joyce, is available here: JBR Volume 6 – Introduction