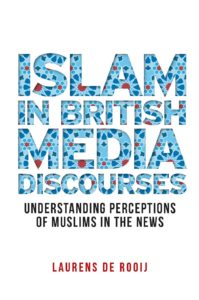 I would like them to think that the way non-Muslims understand media reports about Muslims and Islam is more complicated than previously thought and a combination of the producer’s and the receiver’s preconceptions.

I never expected to be interviewing far-right group members or war veterans about their media consumption.

A combination of computer writing and automated transcription.

I wanted to publish with a reputable University Press and MUP accepted my publication and the reviewers were engaging with the book exactly how I hoped they would.

I am working on a follow up book looking at changes in media representation as well as a number of journal articles, before I start writing up my latest project looking at the role of the ‘own race bias’ in media reception.

To relax a little more and not put too much pressure on myself.

Black Skin, White Masks by Frantz Fanon, because it gives an interesting and compelling account of the psychological processes and issues facing minorities in multi-cultural societies following changes in colonial structures.

I read a lot of non-fiction, biographies, and (political) satire.

Islam in British media discourses: Understanding perceptions of Muslims in the news by Laurens de Rooij is available to buy now.