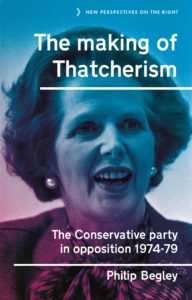 Interesting, original and well researched – ‘He’s spent a lot of time in the archives, and he knows his stuff’…something like that.

If I had to pick one I’d say Ewen Green’s Ideologies of Conservatism. I’ve probably been referencing it since I first started to become interested in the history of the Conservative Party as an undergraduate.

I went to some very nice places – Cambridge, Oxford, London – but not really any unexpected ones. I did have lunch with the late Lord Prior once. He made me a ham roll.

All done via Word (in Times New Roman) – although back when I did the majority of the archival research I wrote pages and pages of notes in pencil on yellow paper. I’ve since switched to photographing documents.

It was suggested to me some time ago that the book would be a good fit with MUP’s New Perspectives on the Right series – this was correct, and it turned out to be a good decision.

For the last few years I’ve been working on the history of management in the NHS as part of the ‘Governance of Health’ project at the University of Liverpool, and have recently published articles on the origins of the NHS national administrative training scheme and the 1974 NHS reorganisation. From June 2020 I’ll be part of a new project looking at the history of Public Health Genomics in the UK.

The Death of a President by William Manchester. It probably wouldn’t be written in the same way by an academic historian today, but the amount of detailed research that went into it and the engaging narrative are unbelievable.

I tend to alternate between fiction – recently ‘classic’ novels that I’ve only just got around to reading – and non-fiction – usually History, Politics and Baseball.

The making of Thatcherism: The Conservative Party in opposition, 1974–79 by Philip Begley is available to buy now.