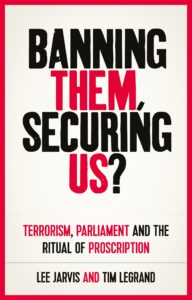 LJ: That’s a tricky opening question! How about something like ‘A critical exploration of the politics of banning terrorist organisations within liberal democracies’? We could probably come up with something more exciting than that, though – Tim?

TL: Well, I’d like them to say “I’m not surprised this is top of The Sunday Times bestseller list”. However, they’re more likely to say something like “A revealing text that uncovers the powerful role that ancient laws and institutional rituals play in today’s anti-terrorism politics in the UK”.

LJ: Another tough one! One book that profoundly shaped my research trajectory was Laclau and Mouffe’s Hegemony and Socialist Strategy which I read in a Political Analysis class as a Masters student at the University of Birmingham. The book fundamentally shaped my PhD thesis (on discourses of temporality in the war on terror) – but also genuinely changed how I looked at the world’s construction. A contender, though, would be Foucault’s Discipline and Punish which I read around the same time, and which might be the most intellectually exciting reading experience I’ve had. I remember having a real physical reaction to the book: feeling desperate to finish it, and yet not wanting to finish reading it at the same time. I’ve never used the book as much I’d like to in my work – but I find the scope and ambition of it (and many of his other books) still very, very impressive. David Campbell’s Writing Security is slightly closer to my own research – and a fantastic example, in my view, of critical security research that was some way ahead of its time.

TL: I think probably Colin Hay’s Political Analysis remains one of my most well-thumbed texts. Like Lee, this was influential in my early training as a PhD and as time has gone one it has remained within reach when I’m struggling to follow the theoretical fractures of politics, which is more often than not. What I found most inspirational in academic texts are analyses that generate clear insight into how state power manifests. Theda Skocpol’s Protecting Soldiers and Mothers was powerful in teaching me how theorising should emerge elegantly from empirical research, and on a similar vein I’ve always admired Noam Chomsky’s Manufacturing Consent. I am endeared to any author who can tell a carefully researched, complex story and explain simply what it means. I’m jealous of that skill.

LJ: It sounds a little clichéd, but I don’t think either of us had a sense of where this project might take us when we began working on it. What I found really refreshing is that we began with really nothing more than an interest in an issue – the banning of terrorist groups – that neither of us knew very much about. We had no substantive research question, or hypothesis, or conceptual framework, or historical framing – just a curiosity, really in a practice that seemed both important and potentially troubling. And we ended up following that curiosity over a period of – what – four or five years, to this point via discussion of political ritual, identity politics, British imperialism, securitization and other themes that we try to bring out in the book.

TL: What Lee said is very accurate. It began with a discussion between Lee and I about how this apparently anti-democratic practice – proscription – remained central to a modern democracy’s security practises. We had no expectations about what we would find, or how we would find it, and in the first instance we thought the topic merited a paper or two perhaps. Yet we were surprised at how modern proscription has this rich, complex history that stretches back to the earliest years of national security, perhaps even before ‘nation’ had any meaning. What was even more surprising was finding that the British government rolled out the power as a means of controlling political dissent during the Imperial era. So what began as a mild interest in this apparent democratic oddity turned into a global exploration of political control and exclusion. That constant unravelling has kept us really engaged in the project, I think.

LJ: Definitely computer – I don’t think I could work any other way. One thing that was different for me, though, with this book project was writing with a co-author in the same room at the same time while we were both living in Adelaide on research sabbaticals. I was truly surprised at how enjoyable – and productive – that experience turned out to be!

TL: I find writing difficult, so I have to constantly invent strategies to outwit the reluctant writer in my head. I only write on my laptop and start by adding dot-points, quotes and relevant facts/figures to form a rough sketch of the argument I think I want to make, then I gradually piece it together. There’s plenty of reordering, rewriting and puzzling that happens, and what I found hugely helpful was writing in the same room with Lee: it gave each of the opportunity to articulate out loud what we were trying to say, and that often helped to overcome writing roadblocks or express our arguments more cleanly. It’s not a linear process, by any means. And nor can I confidently predict how it will unfold. I find that the final draft of my work emerges almost by virtue of an invisible hand: an end-point eventually becomes apparent when your argument has been expressed, and it is almost never the one intended.

LJ: I’d worked with MUP on a previous book with Michael Lister, and had a great experience that time around – which obviously counts for a lot. MUP’s reputation played a big role, too: both in general terms, but also in having published important monographs in critical security studies/critical terrorism studies over a number of years now. Lots of the books I’ve really enjoyed reading – and from which I have learnt a lot – have come from MUP, especially Richard Jackson’s Writing the war on terrorism  which I encountered as a PhD student.

TL: Unlike Lee I had not previously published with MUP, but its publishing reputation spoke for itself. Many of the critical texts on my shelves were published through MUP and they have a common feature: in one way or another, they push at the orthodox edges of the discipline, addressing big questions from unusual angles. I think academic publishing should be bold in that way, and so MUP was a natural destination for our project, which itself was unusual in its central proposition.

LJ: I’m currently trying to write up several articles from longstanding projects. These include work on the theme of ‘British Values’ and their relation to Islam with Eylem Atakav and Lee Marsden; a piece on terrorist obituaries with Andrew Whiting (check out his excellent new book on cybersecurity professionals also recently published by MUP!); an article on the international politics of The Gruffalo with Nick Robinson; and a piece on social and narrative time within the Covid-19 pandemic. I’m trying very hard to finish off the second edition of a textbook on terrorism that I co-author with Richard Jackson, Marie Breen-Smyth and Jeroen Gunning, and Tim and I have a new project together, too, which builds directly on this book, looking at proscription in illiberal states, the role of the UN, and colonial legacies.

TL: Too many things to finish. Aside from my work with Lee on global proscription, I’m writing an article on security politics in the Anglosphere; I’m writing a piece on national security policy-making for a forthcoming collection that I’m editing with Adam Henschke, Michael Clarke and Mathew Sussex. I’m also writing a paper on Malicious Policy, which has had a slow gestation with collaborators Michael Howlett and Kathrin Braun.

LJ: Keep going: you’ll get there.

TL: Add that reference to the bibliography straight away. No, you won’t remember it easily.

LJ: Probably one of the books mentioned above. If I had to pick one, Discipline and Punish – such an achievement to have had such an influence across political theory, history, sociology and other fields.

TL: The Hitchhikers Guide to the Galaxy. No academic book will ever rise to Douglas Adams’ understanding of the human condition.

LJ: I find myself reading far more science fiction and historical fiction than I used to – perhaps as a product of our current dystopian existence.

TL: Science-fiction, spy thrillers and travel writing. I get irritated with biographies, and I can’t explain why.

LJ: I’d invite Tim round – he’s a remarkably impressive cook, and we could celebrate our book together with a bowl of his home-made pasta.

TL: Haha! I’d invite myself to Lee’s dinner party. We could have a beer together, and he could say nice things about my cooking!

Banning them, securing us? Terrorism, parliament and the ritual of proscription by Lee Jarvis and Tim Legrand is available to buy now.