1. How would you like someone who has read your book to sum it up in one sentence?

2. What book in your field has inspired you the most?

3. Did your research take you to any unexpected places?

Yes, to several cemeteries to try to track down the graves of some of my subjects. Against the odds, by clambering through the undergrowth in a particularly overgrown one I succeeded in locating a hidden tombstone. After cutting away the dense vegetation, I finally revealed the inscription to the actress and her parents.

4. Which writing process do you use (computer, longhand, dictate, other)?

Mainly computer, but often started off by notes scribbled after getting out the shower!

Because my book is a perfect fit for MUP’s Women, Theatre and Performance series.

6. What are you working on now?

A history of the Britannia Theatre, Hoxton (a working-class Victorian theatre) and in the early stages of research for a project on nineteenth-century death

7. If you could go back and give yourself once piece of advice when starting out on this project, what would it be?

8. If you could have been the author of any book, what would it be and why?

Carol Birch’s novel Jamrach’s Menagerie, because of its skilful creation of a gripping story that is richly informed by knowledge of nineteenth-century East End history

9. What other genres do you enjoy reading?

10. Which authors (academic and not) would you invite to a dinner party? 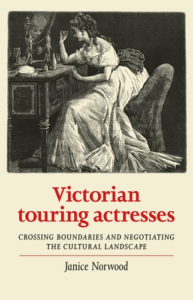