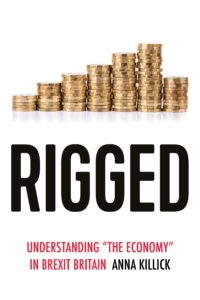 By listening to people from a range of backgrounds this book finds that, increasingly, when people on low incomes hear politicians talk about ‘the economy’, they react more negatively to it than those on higher incomes.

In The Politics of Resentment, published in 2016, Katherine Cramer got herself invited to and in some cases ‘gatecrashed’ hundreds of coffee clubs and groups of friends in diners across rural Wisconsin to talk to them about politics. She found they had a rural consciousness and resented public money going to city dwellers, in part because of racism towards the city dwellers. She says many residents of rural Wisconsin entwine their cultural beliefs about rural life and ethnicity with their economic beliefs to produce a ‘politics of resentment’ which leads them to support right wing candidates who cut spending programmes. She inspires me because she is one of the most energetic and rigorous political ethnographers around and yet she writes with great clarity. I am not sure, however, that the UK has a ‘politics of resentment’ in the same way that America does.

My research took me to streets in an English city I didn’t know very well; and that was a lesson because academics often do not know their localities well enough. One of the areas was leafy and suburban, the other was a housing estate with beautiful views over windswept hills, and I was never there without wondering whether we would see the like of those generously proportioned post war council estate communities again. I spent a lot of time putting invitations through letterboxes, talking to people as they emptied the bins, and then knocking on doors. I was lucky that forty of the people I interviewed invited me into their homes. My interviewees took me to unexpected places all the time, whether they were from high or low income backgrounds, because their stories about their economic histories were so varied. I never knew what it was like to have paper in the bottom of my shoes or to work as a draughtsman in a brewery, or as a senior executive. I didn’t expect either to laugh as much or feel as sad as I did while I was doing this research.

Longhand for some ideas and to get started or restructure text. Computer most of the time. Transcribing is a painstaking process.

MUP has a good reputation for books about the political economy. One of their most seminal books recently was published by former Manchester University economics students dissatisfied with neoclassical economics, particularly in the light of the 2008 financial crisis. They called themselves the ‘post crash society’ and their book The econocracy: The perils of leaving economics to the experts, attempts to promote plural economics and is a great inspiration.

I am lucky to be able to extend the work in this book on qualitative research into people’s understanding of the economy to help develop a five-nation survey of how people think the economy works. I will also be interviewing politicians from the five nations to learn how they think about the economy. The four year UKRI project, known as ‘mental models of the political economy’ (MENMOPE), and based at UCL, shows the growing importance political science attaches to underlying perceptions of the economy. We often take how people think about this complex subject for granted and focus instead on research on, for instance, cultural attitudes to immigration. Given the unusual economic conditions we have had since the financial crisis and the economic debates around Brexit, it is vital we enhance understanding in this area.

I was a secondary school teacher for many years who loved her job, but I should have realised earlier that I needed the new challenge of returning to university to do a PhD. I should have had the confidence and bravery to take that step sooner. I think mature PhD students with skills from other jobs they have worked in enrich academia and connects it to other areas of life. My other advice to myself is that I should not to have been so lacking in confidence in my gut instinct that we need to talk to people in more natural settings. I was lucky that I was so supported by political ethnographers at my then University of Southampton, but I wasted a lot of time looking for other qualitative research by political scientists on perceptions of the economy that wasn’t there, because I couldn’t believe it had not been done. I recently went on a brilliant ECPR course on interviewing, so that is another piece of advice; never stop becoming more rigorous or reflective in your approach to interviewing.

The Great Transformation by Karl Polanyi. I have not followed all the twists and turns that Polanyian scholars write about when they theorise, but I love this book because it describes such sweeps of history, society and economy from the wise perspective of someone who, along with other giants of the time, was witness to war and cataclysm. I would like to have been Polanyi because he died at a relatively positive point in history when he may have believed some kind of settlement between capitalism and people had been reached. However, it hadn’t, and we continue to lurch towards counter-movements against economies that are disembedded from society. The way he sets that conflict between the needs of capital and the needs of society is masterful and an enduring legacy for future generations. There are also social histories I wish I’d written but could not have written because I don’t come from a working class background. Not enough people from working class backgrounds get to write or be published. There are amazing examples like Lisa Mckenzie in Getting By: Estates, Class and Culture in Austerity Britain and her work on Brexit and gentrification. I think she writes brilliantly about how people think and speak, with vignettes that capture so much.

I love epic stories. My favourite is The Mayor of Casterbridge by Thomas Hardy. He came from a relatively poor farming background in Dorset and in his character of the Mayor he has one of the most tragically proud and flawed men in literature. He also has great secondary characters and the best descriptions you will ever read of Dorset landscapes and trudging through them as a working environment. His women characters are often not so well drawn, but he does sometimes see some rural realities of the time through their eyes as well. The last pages of the book when Elizabeth-Jane is reflecting on making limited opportunities endurable and arriving at a ‘latitude of calm weather’ after years of pain is brilliant. My second favourite is The First Circle by Solzhenitsyn, about how scientists and other intellectuals locked in a special gulag endure and philosophise. I love the depth and emotion of a lot of Russian literature including And Quiet Flows the Don by Mikhail Sholokov, describing ordinary people living through revolution and famine, but, while Solzhenitsyn spoke out against Stalin, Sholokov didn’t.

Assuming they have to be alive, Elizabeth Strout, great American novelist, William Gamson one of the best political sociologists and interviewers, Lisa Mckenzie, great British ethnographer, and Amy Farmer, who I worked with on a research project. She has started writing the story of her life, which I hope will one day be published.

Rigged: Understanding ‘the economy’ in Brexit Britain by Anna Killick is available to buy now.