Re-post from the Women’s History Network blog. Originally posted in May 2020. 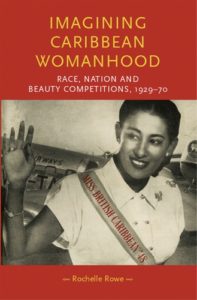 In our latest fascinating blog we hear from Rochelle Rowe about her book Imagining Caribbean Womanhood: race, nation and beauty competitions, 1929-1970

I recently enjoyed the ‘feel-good’ movie Misbehaviour, which tells the story of feminist protests at the 1970 Miss World competition. One scene brings together the newly crowned Miss World, Grenada’s Jennifer Hosten, played by Gugu Mbatha-Raw, and Kiera Knightley’s feminist protester and academic Sally Alexander. The two exchange perspectives on sexism and racism.

What this scene, probably imagined, only faintly touches on is the historical particularity of the moment: the crowning of the first black Miss World amidst an upsurge in black power and women’s liberation movements. I interviewed Jennifer Hosten for my book and we talked about the auspiciousness of her win within this context. 1970 marked a milestone in a decades-long process in which beauty – deeply politicised, racialised and gendered – was at the centre of public debates about modernity, selfhood and citizenship in the Caribbean and the postcolonial world: the desire for political and economic freedom in the wake of empire. Furthermore, Hosten’s win fits within a long and contested history of the politics of black beauty that is at the core of the invention of racism and the struggle against racism ever since.

In the Caribbean, beauty competitions transformed over the course of the twentieth century. They began as exclusively white-only affairs that marked colonial privilege and power and became mass national events in which bourgeois formations of ideal Caribbean womanhood were performed by brown and black women. Far from marginal, the beauty contest became a national obsession revealing the persistence of ideas of racial supremacy, the advance of consumer culture and tourism and through the bodies of women of colour, the ongoing negotiation of race and nation.

The story begins in Jamaica where the beauty competition emerged as a vehicle for elitist white-creole nationalism in flagrant denial of the realities of black labour uprisings and cultural awakening. At this time, some of the earliest black feminist voices in Jamaica decried the racist politics of beauty and sexuality. They called out the deeply ingrained colourism that policed black women’s bodies and curtailed their access to respectability through education, employment and marriage.

In Trinidad the fight to control beauty competitions revealed rival bourgeois programmes, both white and Afro-creole, which sought to ‘cleanse’ the national Carnival of its ‘vulgar’ elements. The ‘Carnival Queen’ beauty competition and its rival ‘Queen of the Bands’ were two such agents for so-called cleansing of Carnival and represented a battleground for control of the transition to self-rule.

In the late 1950s Jamaica weighed in with the new Ten Types One People competition. “Ten Types” offered prizes for beauty according to ten colour categories, from “Miss Appleblossom”, the palest to “Miss Ebony” the darkest. The competition was generally met with praise from all sides, including international accolades, fuelling ideas that Jamaica had ‘solved’ racism.

In London black feminists would again re-enter the beauty contest fray to show that beauty could be a viable political project, with opportunities worth exploiting. Harlem-raised leftist philosopher and publisher Claudia Jones founded the first Caribbean Carnival in postwar London where she lived and worked amongst Windrush settlers. Jones used Caribbean culture as a unifying force and used beauty in particular to politically engage black women. Jones’ ‘Carnival Queen’ beauty competition aired on the BBC, live from St Pancras Town Hall, and brought together Caribbean writers and intellectuals as judges. It actively meddled in centuries of Caribbean pigmentocracy by affirming dark-skinned black women as visions and agents of beauty. Jones’ project revealed a modified Caribbean cultural nationalism, adapted in response to the new challenges faced by black people in postwar Britain and the circuitous flow of ideas of politicised black beauty around the Black Atlantic.

Rochelle Rowe is an author & historian. Her book Imagining Caribbean Womanhood is now available in paperback and as an e-book from Amazon and Manchester University Press.