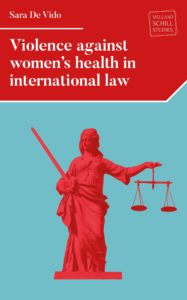 My book Violence against women’s health in international law (Melland Schill Studies in International Law) will be out on June 13, in times of a pandemic that has highlighted existing patterns of discrimination in societies. Women and girls are disproportionately affected by the measures, including the lockdown, which have been adopted in response to COVID-19. A gender analysis is generally absent in the policies of the majority of states, which tend to mainly focus on biomedical needs rather than address structural inequalities and do not respond to what can be defined as a ‘gender emergency.’

The pandemic has also had intersectional effects, exacerbating rooted forms of discrimination on the bases of gender, social condition, ethnicity, disability, geographical location and age, among others. Domestic violence has dramatically increased in the past three months, so have other forms of violence, such as violence against migrant women and cyber violence, to name a few. In some countries, access to sexual and reproductive health, including abortion services, maternal health, access to contraceptives, has become more difficult because of the lockdown. This situation describes one of the dimensions, the vertical one, that have been explored in my book. Violence against women’s health as applied to the access to sexual and reproductive health services in times of a pandemic consists in policies and laws adopted in the field of health with the declared purpose to respond to the emergency, but with the practical consequence of violating women’s rights to health and reproductive health. This is crystal-clear, for example, when a state declares that abortion is an elective medical procedure to be suspended or postponed during an emergency.

Violence against women’s health in international law is thus particularly timely. It explores the relationship between violence against women on one hand, and the rights to health and reproductive health on the other. It argues that violation of the right to health is a consequence of violence (domestic violence, female genital mutilation, and rape), and that (state) health policies in the field of health (access to abortion, contraceptives, maternal health, forced sterilization) might be a cause of – or create the conditions for – violence against women. It significantly contributes to feminist and international human rights legal scholarship by conceptualising a new ground-breaking idea, violence against women’s health (VAWH), using the Hippocratic paradigm as the backbone of the analysis. As it is known, the Hippocratic paradigm is composed of anamnesis, diagnosis, treatment and prognosis. How can this paradigm be used in international law? I structured the book following its four constitutive elements and I imagined to be the doctor/lawyer who, through the lenses of international law and feminism, analyses, finds connections, and provides possible answers.

The two dimensions of violence at the core of the book – the horizontal, ‘interpersonal’ dimension and the vertical ‘state policies’ dimension – are investigated through around 70 decisions of domestic, regional and international judicial or quasi-judicial bodies (the anamnesis). The concept of VAWH, drawn from the anamnesis, enriches the traditional concept of violence against women with a human rights-based approach to autonomy and a reflection on the pervasiveness of patterns of discrimination (diagnosis). VAWH as theorised in the book allows the reconceptualisation of states’ obligations in an innovative way, by identifying for both dimensions obligations of result, due diligence obligations, and obligations to progressively take steps (treatment). The book eventually asks whether it is not international law itself that is the ultimate cause of VAWH (prognosis), and argues that if international law might be the cause of violence, then we must go back to international law to find in the system itself an answer to the challenge: law as the cause and the cure; law that stems from society and in society finds its nourishment and its improvement.

The complete list of references and updates on cases discussed in the book are available in my wordpress webpage.

A short note on the series to which the book belongs

The book appears in the Melland Schill Studies in International Law. It is surprising how everything turns out to be thus connected in life. The series, which also includes the pioneering The boundaries of international law (Chinkin and Charlesworth), started as a series of public lectures thanks to the bequest by Miss Olive Bertha Schill (1893 – 1958) of Prestbury, Cheshire, to the University of Manchester in memory of her brother Edward, who died during World War I. While I was visiting scholar at the Manchester International Law Centre, where the idea of this book took form some years ago, I co-founded the Women in International Law Network, The Olive Schill’s Society (WILNET). There was little information about Olive Schill’s life, but her life and social commitment inspired all of us, female researchers in international law who created WILNET, and continues to inspire lectures and publications in memory of her brother. I am honoured that my book will be part of this woman’s legacy.

Violence against women’s health in international law by Sara De Vido is available to buy now.