1. How would you like someone who has read your book to sum it up in one sentence?

Thanks to studies that place the early modern sonnet in context, this book shows that it is a more varied form than is usually assumed and that it is a very fertile ground for academic investigation.

2. What book in your field has inspired you the most?

3. Did your research take you to any unexpected places?

To the secluded library of Wolfenbüttel. The richest Renaissance Library lost in the German countryside.

4. Which writing process do you use (computer, longhand, dictate, other)?
Computer

For its sound reviewing process. For The Manchester Spenser’s commitment to promoting early modern studies, and encouraging work on authors considered “major” and “minor” alike.

6. What are you working on now?

7. If you could go back and give yourself one piece of advice when starting out on this project, what would it be?

Do not underestimate the time it takes to compile an index.

8. If you could have been the author of any book, what would it be and why?

9. What other genres do you enjoy reading?

10. Which authors (academic and not) would you invite to a dinner party? 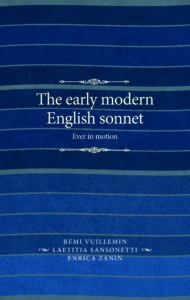