Peter J. Verovšek answers the questions that he didn’t have time to answer in his MUP Armchair Event on Monday 22nd June. Thank you very much for attending this event, and for all of your excellent questions.

You can view a list of upcoming MUP Armchair Events and watch recordings of past events.

Will the EU recover?

It is too early to say at this point. Brexit was certainly a blow to the European project, both economically and politically, as it removed a major contributor to the EU budget as well as the EU’s largest geopolitical actor (in terms of military might, intelligence sharing, and a seat of the UN Security Council, to name just a few metrics). Nevertheless, since then the British experience has also had some positive effects within the EU. For example, before the Brexit referendum in 2016 many far right leaders in Western Europe – including Marine Le Pen in France and Geert Wilders in the Netherlands – were arguing for leaving the EU (Frexit and Nexit, respectively). However, having seen how difficult and costly leaving actually is – and how little leverage the UK has had in its negotiations with the EU – these parties all now speak of reform, not exit. In this sense, the absolute debacle of Brexit has made everyone across Europe more aware of the value of the EU.

More generally, the more recent economic and public heath crisis created by the Coronavirus has – surprisingly – produced some hopeful signs. For example, the Franco-German initiative to create an economic recovery fund financed through joint borrowing by the European Commission is an example of Emmanuel Macron’s positive, pro-European influence on Angela Merkel and the EU more generally. Compared to the Frugal Four’s refusal to countenance the creation of eurobonds at the height of the financial crisis in 2010-12, the conversation on the continent is much more positive and productive now. Although this proposal for so-called Coronabonds will likely prove to be too small and has yet to gain the approval of the individual member-states, it still represent a significant step forward that may help to bring the EU back from the brink. Additionally, the increased willingness of member-states to share medical goods and equipment, as well as the creation of the ‘rescEU’ medical stockpile, are also signs that the pandemic may lead to greater European solidarity in the long term, rather than the EU’s demise.

I don’t think eg. Macron’s policies are problematic as European. On the contrary, I believe his policies are too little European and are too much globalistic. Should, in this regard, Macron truly be set as an example for future pro-European politicians?

I find Macron’s technocratic, neo-liberal, post-partisan vision of politics to be problematic. However, I think that his various initiatives to deepen the EU are generally positive and productive. Being pro-European and being a globalist often go together, as both involve a commitment to moving politics beyond or above the nation-state. At this point, I am not too worried about Macron’s globalism, as I think that his sights are pretty firmly set on deepening integration on the continent.

Thank you for you captivating talk. I am wondering if there is any empirical evidence supporting your optimism regarding the pro-European sentiments of people in born in 1970s and 1980 in CEE countries?

Yes, there is some, but it depends how and what you measure. Rather than looking at somewhat ambiguous survey data, however, I think it is more important and more interesting to reflect on how this generation is voting with its feet. Young professionals and other individuals with marketable skills throughout CEE are taking advantage of their right to live and work anywhere in the EU to move to Western Europe. This as a strong sign of their willingness and desire to lead lives defined by their European, not their national citizenship.

Unfortunately, this movement of labourers from East to West is also problematic, as it is creating a demographic gap in the new, postcommunist member-states. The fact that the young are leaving – often after having taken advantage of a good, free university education at home – creates financial problems for the member-states of CEE. Insodoing it also increases the voting power of older citizens, who are more likely to support the far-right and nationalist parties, and who also then have suffer from the social and welfare cuts that result from the loss of the tax base provided by young workers. The election of such nationalist leaders by demographically aging states in Central Europe then creates problems for the Western member-states as well as for the EU as a whole, as they are able to wield their influence within the institutions. If anything, this phenomenon is a sign that the free movement of labour must also be accompanied by welfare protections, stimulus and redistribution, to prevent the hollowing out of entire member-states.

It seems that your theory explains the rise of 5 Star in Italy, Brexit, Urban in Hungary, Janša in Slovenia, and Duda in Poland.

Yes, I think that my approach provides us with a way to understand how cultural factors can be used to explain how and why illiberal democracy has established itself in the postcommunist region, while the Western member-states have – by and large – managed to contain these illiberal forces (for the present, at least). I write about this a lot in the book. I have also published an academic article on this, as well as a shorter piece in Social Europe, where I am also a regular contributor.

Hmm, this is an interesting question. Clearly the accession of the postcommunist member-states to the EU, combined with the fact that the UK immediately opened its labour market to these workers, played a role in the Brexit referendum, as the Leave campaign was able to accuse migrants from CEE of stealing British jobs. However, overall I think that it is very difficult to tie Brexit to the rupture of 1989.

That said, you are right to think that my story of ruptures can help to explain Brexit. However, as I argue in my book, the problem is that Britain never really accepted the rupture of 1945. This is due to the fact that World War II was fought over, Britain not on it. Since it did not experience the humiliating loss of sovereignty that came with occupation, collective memories of the conflict in the UK did not have the same tragic quality. While World War II delegitimised the nation and nationalist narratives on the continent, the British could still ‘bitterly [savour] the memories of its past glories and “finest hour,”’ as Stanley Hoffman once put it.

In this sense, I think that the fact that Britain never really experienced or fully accepted the rupture of 1945 explains why it has been an ‘awkward partner’ to the EU from the beginning, i.e. ever since Churchill refused to enter into the initial negotiations that led to the creation of the first European Community – the European Coal and Steel Community – in 1951-52. I would therefore argue that Brexit has more to do with a residual nostalgia for the empire and for the national glories of World War II than it does with the fall of communism in 1989. The post-referendum cinematic successes of Dunkirk (2017) and Churchill (2017), both of which portray Britain’s ability to survive even without its allies, can thus be read as confirmations of the nationalistic, nostalgic overtones of the Brexit project.

Given that your cultural study currently culminates with the generation impacted most by economic crises (employment, wages, etc.) and with the “supranational” threat to the E.U., how do you interpret this in terms of memory. Is it a cyclical phenomenon?

I am not sure that it is cyclical. However, collective memories do change over time in ways that follow certain patterns. The EU is at a very critical place right now because it is in the process of losing the generation of its founding, i.e. the generation of individuals who have personal memories of World War II and the rupture of 1945.

At the end of my book I make this point through a comparison to the United States. In a speech from 1839 – in the buildup to the American Civil War (1861-65) – future President Abraham Lincoln reflected on the effects of the passing of ‘a once hardy, brave, and patriotic, but now lamented and departed, race of ancestors.’ The dangers posed to political institutions following the passing of the individuals that toiled in their establishment reveals the important generational dynamics involved in the (re)founding of political communities. As time passes and circumstances change, future generations begin to think about the political forms of life they have inherited from the dead in new ways. To a certain extent, this is part of a natural process. However, it can also have negative effects as new leaders forget the lessons of the past and no longer recognise the benefits of the institutions that have been bequeathed to them.

This is the position of Europe at the beginning of the twenty-first century. We will have to see if the EU can survive long-enough for a more European generation, which does not depend on memories, but on its own lived expereince to ground its commitment to integration, to take power. 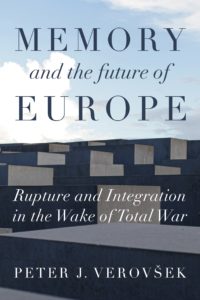 Memory and the future of Europe: Rupture and integration in the wake of total war by Peter J. Verovšek is available to buy now.

Peter J. Verovsek is Lecturer (Assistant Professor) in Politics and International Relations at the University of Sheffield