The plays in Chartist Drama offer a view of working-class men and women creating a remarkable dramatic culture under difficult conditions in 1840s Britain.

Ian Haywood’s Revolution in Popular Literature and his anthologies of Chartist fiction opened up whole new fields of research. I hope that Chartist Drama can do likewise.

The project began when I was at the Columbia University Rare Book and Manuscript Library, and serendipitously came across a copy of John Watkins’ John Frost, a play about the Chartist uprising at Newport, Wales, which was widely believed not to be extant. (A second copy of the play was more recently found in a collection at the National Library of Wales.) This launched a project that has been full of discoveries about the Chartist counter-culture that gave life to a number of long-forgotten texts.

I write everything longhand and then type it into the computer, and then obsessively work from print-outs to revise.

MUP is the perfect publisher for Chartist Drama. I am happy to join MUP’s strong list in works about working-class history, culture and literature. It was also fitting to publish at MUP considering how Lancashire was the heartland of both Chartism and Chartist dramatic culture. In Manchester itself, the Queen’s and Thespian theaters hosted Chartist benefits, at which were performed Hofer, the Tell of the Tyrol and Wallace, the hero of Scotland whilst Chartist amateur actors staged William Tell and The Trial of Robert Emmet in two working-class settings, the ‘Hall of Science’ and the ‘People’s Institute’ (as well as in many of the industrial towns surrounding Manchester).

Mostly, child care! I have two grade-school age children who have both been home from school for the last three months. When I can steal a few minutes for my own work, I am beginning a new project on an anti-imperialist tradition in radicalism and its expression in popular culture in the middle decades of the nineteenth century—starting with the abolition of slavery and extending to the Morant Bay Rebellion in Jamaica in 1865.

8. What other genres do you enjoy reading?

I enjoy science fiction, especially dystopian with an environmentalist emphasis; I love hard-boiled noir such as Raymond Chandler and Graham Greene.

9. Which authors (academic and not) would you invite to a dinner party?

Ursula K. Le Guin. I’m tempted to stop there wanting her conversation all to myself, but it would be nice to invite Margaret Atwood too.

And of course it would be fun to invite some Chartist authors, such as Ernest Jones, John Watkins, John Cleave, Helen MacFarland and Thomas Cooper—although I worry that the party would break down into acrimonious argument! 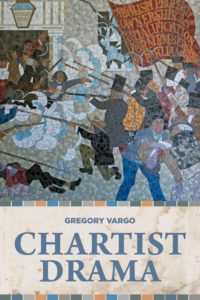