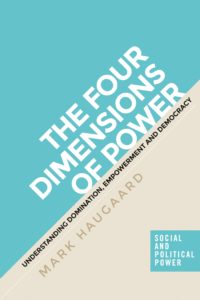 The four dimensions of power is a nuanced and clearly presented account of social and political power, which inspired me to look at the social world in a new way.

Steven Lukes (1974) Power: A radical view. Palgrave Macmillan. I read this as an undergraduate, and got me thinking about the subject of power.

Current events in politics, in particular the crisis of democracy, had an implicit effect, which I had not predicted. It made me wonder what makes for a stable democratic system, where everyone gains.

The book series Social and Political Power is appropriate.

Articles, and a book, provisionally entitled Democracy and Power: Pragmatist versus idealist and populist visions.

Steven Lukes (1974) Power: A radical view. This book is exceptionally clear, and I hope that my current book with MUP is a contribution in a similar vein.

My personal obsession is sailing, so any books about boats, especially classic boats, and sailing adventures are my favourite. I let this work itself into the introduction of The four dimensions of power, where I connect Wittgenstein with the Vikings and great sailing ships of the past.

The four dimensions of power: Understanding domination, empowerment and democracy by Mark Haugaard is available to buy now.

Mark Haugaard is Professor in the School of Political Science and Sociology at the National University of Ireland, Galway