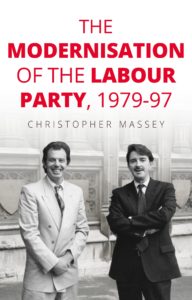 The definitive story of how the Labour modernised their internal organisation during 18 years in the wilderness from 1979 up to the party’s 1997 victory.

Lewis Minkin’s Blair Supremacy is a meticulously detailed investigation of the Blair years which has no parallel due to the sheer depth of research and the intimate access he received through his work for the party.

Some expected and some less so! When I started the project I hoped to be able to speak to some of the Labour Party’s key actors, but I would not have expected to have been given access to the offices, and on some occasions, homes of the most senior figures in the party during the period: Tony Blair, John Prescott, Peter Mandelson and Neil Kinnock, amongst many, many others.

I write on an old desktop PC although I always have a notepad at hand to scribble down ideas as I go.

MUP has a history of publishing cutting-edge research on the Labour Party from Minkin’s Blair Supremacy, highlighted above, through to other works such as Jonathan David and Rohan McWilliam’s (eds.), Labour and the Left in the 1980s, (2017), Eunice Goes’, The Labour Party under Ed Miliband, (2016), and Stephen Meredith’s, Labours Old and New, (2013).

I am currently working on an article describing the history of the Labour Party’s National Executive Committee. My next major project will be an investigation of nationalisation policy in Britain, principally within the steel industry.

Take your time and do not try to do everything at once. This project evolved hugely from my first ideas into a much more cohesive investigation of the Labour Party across eighteen years (rather than the biographical study of one of the key actors in these years I had first intended when I began about five years ago.)

Possibly Tony Benn’s Diaries, not necessarily for the politics, but for beginning the diaries at such a young age and maintaining the project throughout his lifetime in such incredible detail.

My favourite books since childhood are the three volumes of The Lord of the Rings, though I would not describe myself as a fantasy fan in general. Broadly, I enjoy classical literature in a variety of genres from Austen and Dickens through to Salinger and Steinbeck.

Probably a who’s who of political auto-biographers: Blair, Brown, Prescott, Mandelson alongside some of the party’s great historians: Andrew Thorpe, David Howell, Stephen Fielding, Lewis Minkin, Kenneth Morgan, (alongside many others I feel bad not naming explicitly!)

The modernisation of the Labour Party, 1979–97 by Christopher Massey is available to buy now.