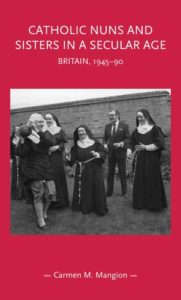 In 1972, Alan Whicker, presenter of the widely watched ‘Whicker’s World’, together with his television crew, entered the silent and hidden world of the cloister.  As part of a series ‘Whicker within a woman’s world’, he had astoundingly secured permission to film a half-hour programme about a Warwickshire community of Poor Clares, an enclosed Catholic order of nuns.

The programme opened evocatively with barefoot young nuns skimming lightly along a shiny wooden floor. Covered from head to toe in their brown Franciscan robes, with only their faces, hands and bare feet showing, the nuns were filmed going about their daily activities: cooking, cleaning, recreation and praying the Divine Office.  On the cover of Catholic Nuns and Sisters in a Secular Age, Britain, 1945-1990, Whicker and some of the older Poor Clares watch one afternoon’s recreation, a vigorous game of football.

The programme explained monastic life as a world separate from everyday life, yet the decision to allow Whicker and his crew access to film in the cloister indicated an unprecedented opening up of religious life that led a wider public into the monastic world.

The updating of religious life had been in process since the 1950s, but the Second Vatican Council (1962-1965), held a decade later, propelled sisters and nuns to live in what were for them more radical and experimental ways.  As a world-wide, ecumenical council, it had launched a ‘reform’ movement that was intended to modernise and renew Catholicism while holding firm to ‘essentials’.  Many convents and monasteries embarked upon a rethinking and frequently a reworking of the day-to-day practice of religious life.  Sisters and nuns took on experimentation: some with great gusto, others with great dismay, while some tried to ignore it altogether.

Catholic Nuns and Sisters in a Secular Age draws on archival materials and over eighty interviews to place sisters and nuns of nine religious institutes at the heart of British post-war social change, shedding new light on how religious bodies became more modern.  The menu of social changes within the convent was wide-ranging.  It included alterations in liturgy.  Relationships with family, friends, other religious and co-workers took on new dimensions.  Ministry was rethought and some communities moved away from working in their own schools and hospitals that had been so intrinsic to their mission and identity.  And the cloister grille and the religious habit were altered.

One example of a radical change was the move from hierarchical to more participative models of decision-making.  Decisions were made by the Abbess or Mother Superior and her Council of four or five with little contribution from ordinary sisters and nuns who were expected to obey without question.  But the world was changing: the protests of ‘1968’, demanding a voice for those socially and politically unrepresented, penetrated the convent too.  Through questionnaires and meetings, the voices of ordinary nuns and sisters were heard for the first time contributing to changes in the everyday life of the convent.  More sisters influenced decisions or became decision-makers, as delegates to General Chapter meetings or as members of provincial and local structures. Some nuns appeared to transition easily from obedience to consultation. One poor Clare recollected

‘I was amazed after the Council at how many people who had seemed totally unquestioning began to say things like, well I’ve always thought this was wrong, or we shouldn’t do this, or it would be better if we did that.  I was astonished at what came out.’[1]

Reflecting on the zeitgeist of the 1960s, she continued with

‘[…] people began to say things like ‘they say we have to have community meetings’, you were never clear who ‘they’ were, but it was kind of in the air.  Perhaps part of the cultural revolution.  [laughs]  It was kind of in the air that things needed to be more consultative, that it wouldn’t continue to work just by saying ‘do this and do that’.  And once you start that ball rolling it can’t be stopped actually, it takes on its own dynamic.’

To enhance participation, some large communities were split allowing sisters to ‘to take more responsibility for the life of the group and not rely on the Superior […]’.[2] In one teaching congregation, some sisters pushed this further and questioned the need for a local leader.  One sister, after being appointed Superior of a local community of five, recalled being told ‘I’ve got nothing against you personally […] but I don’t really think we need a Superior in this community’.  She recounted the questioning in her community: ‘Do we need a named person or do we just simply organise life among ourselves?’.  When asked about the process of decision-making, she offered ‘we would just sit and talk about things and come to a consensus […]’.   As part of the move towards participation, sisters experimented with anti-hierarchical, egalitarian, ‘structureless’ communities where decisions were made collaboratively.

Not everyone was keen on increased participation and all it entailed.  Questionnaire responses surveying the first three years of change included one sister’s reaction: ‘Submission and Obedience are necessary wherever people are living together.  In every secular sphere, business or society, a certain subordination is essential.’  Another, perhaps fed up with the many consultation meetings she was required to attend, retorted: ‘Far too much is attached to dialogue and committee discussion – we have our work to get on with.’

Nuns and Sisters in a Secular Age aims to dispel the myth that women’s religious communities were not influenced by the radical post-war changes in a secular world. The book charts social changes in religious life, like the move from hierarchy to participation, mapping them onto larger societal shifts.  The reactions of nuns and sisters to the changes in religious life were complicated and included feelings of liberation, confusion, regret and dismay.  This is not a story of unremitting progress; nor is it a story of constant tensions and arguments; it is a story of the complicated lived experience of social change.

Carmen M. Mangion is a Senior Lecturer at Birkbeck, University of London. Her book Catholic Nuns and Sisters in a Secular Age, Britain 1945-1990 (2020) is available at Manchester University Press.

[1] Some participants wished to remain anonymous so all the oral narratives have been anonymised for consistency.