In 1606 William Shakespeare put a black Egyptian Queen, Cleopatra, on the London stage. And around her he put her black court: Egypt, for early modernity, was understood to be a black nation. In Antony and Cleopatra he told the story of Roman imperialist conquest which, triumphing in the Battle of Actium, put into ‘white’ hands the power to write the future history of the world. In Antony and Cleopatra Shakespeare was perhaps prompted to return to ‘Roman’ history after his  Julius Caesar (and a gap of some six years) by an extraordinary, even sensational, performance at Court in the revels season of 1604-1605. Queen Anna (royal consort of James I, who’d ascended the English throne in March 1603) commissoned a masque. She personally  instructed Ben Jonson and Inigo Jones, as writer and designer, that in her Masque of Blackness she and eleven of her highest ranking women courtiers would perform as Egyptian ‘Daughters of Niger’, not wearing stocking masks and gloves as was conventional to represent blackness, but embodying blackness, wearing blackness on their skins. We have Jones’s costume designs for that masque. We have contemporary response to the performance. Was another response to Anna’s ‘Daughter of Niger’ Shakespeare’s Cleopatra? 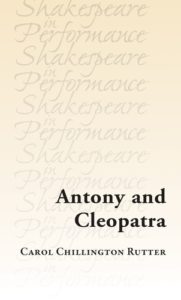 Carol Chillington Rutter’s Antony and Cleopatra (Shakespeare in Performance) reconstructs the Jacobean history of this play. But she then observes how, over the subsequent 400 years, Cleopatra and Egypt’s black history have been ‘whited out’ in productions on stage and screen. Played by actors from Peggy Ashcroft to Helen Mirren to Harriet Walter (to say nothing of Theda Bara and Elizabeth Taylor), Shakespeare’s Cleopatra has constantly been seen as a white icon – even as, in performance, she’s been set alongside a black side-kick: Iras or Charmian have regularly been cast black. Rutter interrogates the unacknowledged racist politics of ‘standard’ casting, ‘standard’ representation and looks at productions that have subverted this tradition. But then, with Tarell Alvin McCraney’s ‘radical cut’ of the play, staged at the Royal Shakespeare Theatre (2013), she sees how black activism has worked to restore black Cleopatra to the English stage.  There’s still a way to go…

This book is appearing at a critical moment of cultural interrogation in the UK.  We ask Shakespeare to perform a massive amount of cultural work for us – in education, in performance, in the global marketplace. Rutter’s performance history aligns with current discussions and sets Shakespeare at the centre of them.

Antony and Cleopatra is published by Manchester University Press in the Shakespeare in Performance series.

Carol discuss her new book in a short in this short video This book writes a performance history of Antony and Cleopatra, Shakespeare's most ambiguous play, from 1606 to the present. It observes the choices that actors, directors, designers, musicians and adapters have made each time they have brought the play's thoughts on power, race, masculinity, regime change, exoticism, love, dotage and delinquency into alignment with a new present. Informed by close attention to theatre records – promptbooks, stage managers' reports, reviews – it offers in-depth analyses of fifteen international productions by (among others) the Royal Shakespeare Company, Citizens Theatre Glasgow, Northern Broadsides, Berliner Ensemble and Toneelgroep Amsterdam. It ends seeing Shakespeare's black Egyptian Queen Cleopatra – whited-out in performance for centuries – restored to the contemporary stage. Written in a lively and accessible style, this book will be of interest to students, academics, actors, directors and general readers alike. This book is now available for pre-order via our website www.manchesteruniversitypress.co.uk @universityofwarwick #book #booklover #bookshelf #bookstagram #academicpublishing #shakespeare #literature #plays #performing #arts

A post shared by Manchester University Press (@manchester_university_press) on May 12, 2020 at 3:40am PDT