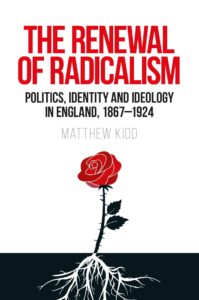 It offers a fresh perspective on long-running debates and speaks directly to contemporary discussions about the Labour Party and progressive politics.

Computer and, in the archives, pencil and pad!

It has a reputation for producing innovative literature on the themes of my book.

A journal article on centrist politics in interwar Britain. I am also planning a larger project (potentially leading to a second book) on radical networks in the Anglosphere between the 1840s and 1880s.

Keep your footnotes tidy as you go along!

Gareth Stedman Jones, Languages of Class (1983). Because it was hugely influential and led to a shift in the way (some!) historians study political movements.

A one-to-one with George Orwell would be interesting!

The renewal of radicalism: Politics, identity and ideology in England, 1867–1924 by Matthew Kidd is available to buy now.

Matthew Kidd is a Researcher at the University of Oxford