Manchester University Press is pleased to announce that the Bulletin of the John Rylands Library is now available to subscribers via the manchesterhive platform. 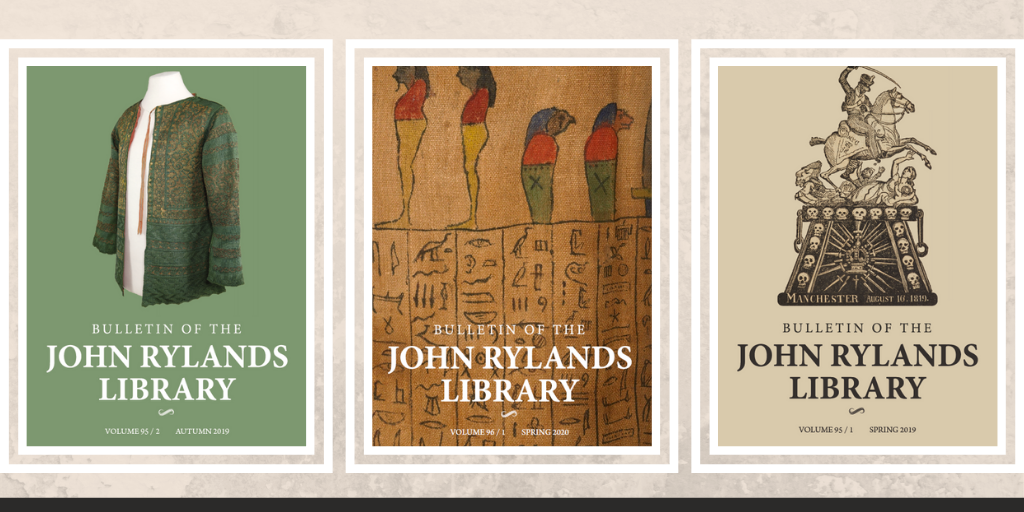 The John Rylands Library houses one of the finest collections of rare books, manuscripts and archives in the world. The collections span five millennia and cover a wide range of subjects, from archaeology and history to literature, drama and music, science and medicine, theology and philosophy. For over a century, the Bulletin has published research that complements the Library’s special collections.

To mark the move, the editors have dug into the archives to find five articles that capture the journal’s unique character. From Monday 3 August we will be unlocking these articles so that they are free to read until the end of the month.

How the King of the Witches Dusted the Books: Alex Sanders at the John Rylands Library

Alex Sanders was a founder of modern pagan witchcraft in the UK. In 1962 he was fired from his job as a book duster at the Rylands for ‘neglect of his duties’. Grevel Lindop’s article from 2018 investigates Sanders’s rather mysterious dismissal and asks what effect it had on his career as an occultist.

The Cholera Epidemic in Manchester 1831–32

In this article from 2005, Alan Kidd and Terry Wyke explore the Manchester cholera epidemic of 1831–32. They reveal the Special Board of Health’s efforts to manage both the disease and the public panic, which took the form of anti-Irish sentiments and fears of body snatchers.

In the eighteenth century, the Qianlong Emperor of China built European-style palaces in the Garden of Perfect Brightness and ordered a set of images from Paris. Tragically, the palaces and most of the images were later destroyed in the Opium Wars. Yangwen Zheng’s 2015 article examines a surviving image in the Rylands collection, while highlighting the role of Europeans in Chinese history.

Bringing the Villains to Book: Balzac and Hoffmann as Antecedents of the Modern Detective Story

Robert Vilain’s article from 2002 examines three works by Hoffmann and Balzac that have been identified as precursors to the detective novel. While acknowledging certain parallels, Vilain resists this identification, presenting a theory of ‘safe’ and ‘unsafe’ narratives.

‘Carven stone and Blazoned Pane’: The Design and Construction of the John Rylands Library

John Hodgson’s article from 2012 examines the John Rylands Library itself. Identifying the building as an outstanding example of neo-Gothic architecture, Hodgson situates its foundation in the economic and cultural development of nineteenth-century Manchester, before moving on to consider more recent developments.