A thought-provoking and nuanced exploration of the way that measurement technologies impact on the way we experience health.

I went with BT archives and a group of AHRC CDP scholars to the top of the BT tower and into the Dollis Hill secret war-time bunker. Most memorably, we visited the Kingsway telephone exchange shelter, which comprises a series of tunnels deep underneath the central line. It was incredible to see the remains of old computers and visit the long-abandoned staff restaurant and bar. I think you could hear the trains passing above you, but I might be making that up. I am sure that the space would be an incredible nightclub if it were not for all the asbestos.

Computer, sometimes also the notes app on my phone if I get an idea while out on my morning run!

I wanted to be included in a dedicated disability history series and MUP have the most established and prestigious such series.

First, I was recently awarded the Scottish History Society Alasdair Ross Prize for a project on oralism and epistemic injustice. This grant will support archival research on the nineteenth century schools for the Deaf in Scotland, which I will conduct throughout the summer of 2021. I will interpret these archival collections through an epistemic injustice framework, arguing that nineteenth-century oralism was a paradigmatic case of epistemic injustice. That is, a method that first denied and then further restricted the ability of deaf children ‘to know’. This was effective because Oralism was an educational method that prioritised speech and lip-reading to ‘normalise’ deaf children and force their integration into the hearing world. Widely accepted after 1880, it also reflects how technological intervention—such as the telephone devised by Alexander Graham Bell—favoured speech as the ultimate marker of deaf cure. I will explore the ways in which different areas of Scotland resisted this injustice.

Second, I am working on my second book project on Dr Phyllis Margaret Tookey — a British chemist and physiologist whose scientific research significantly transformed medical perceptions of “invisible disabilities:” that is, those hidden from obvious view and not apparent until medically framed. This book, Instruments of Precision: Phyllis M.T. Kerridge and the Politics of Disability in Interwar Britain is co-authored with historian Dr. Jaipreet Virdi and under contract with Johns Hopkins Press for publication in 2023.

For the third strand of my future research, I am developing a new project on the ways the different reference classes used in epidemiological research have historically obscured the social determinants of health inequities.

If you could go back and give yourself once piece of advice when starting out on project, what would it be?

Not to be so scared of starting! I really procrastinated before beginning the first draft because I was worried sick about its possible negative reception. As soon as I started writing I knew I had something good to say and I started to enjoy the process.

This book! I could not have written any other.

Aside from history of medicine, history of science, and history of technology, I also enjoy reading about feminism and technology. I recently raved about The Myth of the Perfect Pregnancy by Lara Freidenfelds because it combines history of these fields to argue that that specific reproductive technology has changed the way we all think about pregnancy.

I love fiction and especially fiction written by women. Recently I have read a lot of Curtis Sittenfeld, Bernardine Evaristo, Ottessa Moshfegh, Kevin Kwan, and Tsitsi Dangarembga. The Anne of Green Gables series is my comfort read. My Mum says I tried to write to L.M Montgomery when I was little and was devastated when I learned she had died (in 1942). 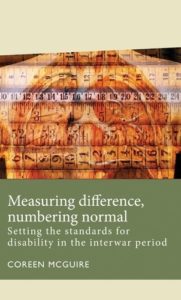