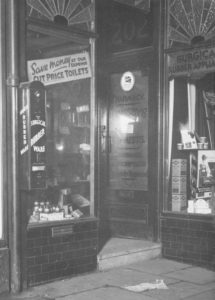 Where would you go if you wanted to buy condoms? If you didn’t want them immediately, you might wait for your weekly shop and pop a packet of Durex in your trolley along with the rest of your shopping. But if you wanted to choose from a wider selection of brands, the high street chemist might be more suitable. For a more spontaneous and discreet purchase, a toilet vending machine or local garage might better meet your needs. For a novelty condom, you may even visit a sex shop, while online shopping would remove any potential embarrassment from such purchases.

Until you came across this blog post, it is extremely unlikely that you’d ever given much thought to the range of places from which you could buy condoms. For the most part, condoms are a branded and packaged product like any other, unnoticeably stacked high on shops’ shelves until you require them. But manufacturers, distributors, advertisers, retailers and others have long carefully shaped the buying and selling of condoms and other contraceptive goods, viewing it as a crucial part of the British economy and of a consumer’s moral right to take charge of their own fertility and sexual health. My book, The business of birth control, charts the neglected modern history of contraceptives as consumer products and explores how, why and when such products came to made, branded, promoted and bought and sold in Britain.

Much historical attention has been paid to the contraceptive Pill and its role in aiding a sexual revolution, but the commercial availability of all manner of contraceptive products made from rubber or chemicals pre-dates the 1960s. It was during the interwar period that rubber and chemical contraceptives first became consumer goods. The gradual replacement of sheet rubber with latex from the 1930s no doubt aided cheaper and more efficient mass production and resulted in thinner, easier to use and disposable products, but it was the simultaneous shaping of these products through branding and attractive packaging, their widespread promotion in print ranging from pornographic publications and women’s magazines to books and catalogues, and their expanded distribution via mail order, chemists’ shops, birth control clinics and vending machines that created and shaped new markets of consumers. Indeed, it is no coincidence that Durex, one of the world’s leading condom brands today, was launched by the London Rubber Company in 1929. The firm’s subsequent success resulted from its ability to disassociate the condom with venereal disease and frivolous and impulsive sexual intercourse and to transform it into a high-quality product marked out by its characteristic modernist packaging sold only in packs of three from reputable chemists’ shops. Indeed, no longer did embarrassed men have to obtain their condoms from their barber, well-known for their discretion and phrase ‘something for the weekend, sir?’ Throughout the Second World War, Durex was popular among British soldiers, as well as other consumer groups, while the expansion of birth control clinics across the country, following the establishment of first clinics of the Malthusian League and Marie Stopes in 1921, provided married women with greater access to female barrier contraceptive methods. Married couples in significant numbers also began to accept and purchase contraceptives as they began to embrace new sexual possibilities, including the separation of sex from reproduction, the acceptable control and planning of fertility, and the reconfiguration of gender relationships around a companionate marriage, and as they became citizen-consumers of a new era. 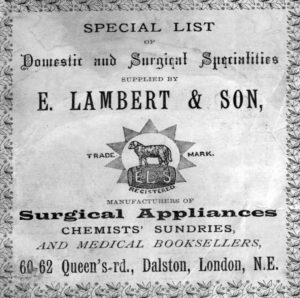 Yet, to be sure, the new widespread availability of contraceptives did not constitute a consumer revolution in the interwar period. In fact, the new contraceptive commercialism was far from universally accepted at a time when lingering Victorian and Edwardian sensibilities, alongside the demographic and emotional consequences of the First World War, continued to shape interwar attitudes towards sex and sexual behaviour. Fearing that contraceptives newly visible to consumers would result in an increase in promiscuity and prostitution, particularly among ignorant and corruptible adolescents, doctors, social moralists and MPs conducted campaigns to place the promotion and distribution of contraceptive products in the hands of qualified medical practitioners and chemists only. These attempts at medicalisation were most obviously embodied in the National Birth Control Association’s new laboratory and clinical tests for contraceptive goods from 1935. All companies wishing to supply the Association’s growing number of clinics with goods were required to meet these standards, thus leading to a universal standardisation of contraceptive goods based on new definitions of efficacy and reliability. Parliamentary attempts to medicalise contraceptive goods were embodied in the Contraceptives (Regulation) Bill of 1934 and 1938, which outlined financial penalties for retailers who sold contraceptives and distributed related advertising to unmarried adolescents. The Bill represented the Public Morality Council’s particular concern that adolescents had unrestricted and unmediated access to condoms via the many vending machines established on street corners across the country between 1929 and 1949.

But new contraceptive standards and legislation did not limit commercial supply. The outbreak of the Second World War ultimately meant the Bill was abandoned and Britain’s commitment to laissez faire economics meant it never imposed any legal restriction on the sale and promotion of contraceptives. A byelaw adopted by 90 per cent of local councils across the country ensured the removal of vending machines from public streets by 1950, but this byelaw did not stop adolescents, or indeed other types of consumers, from buying condoms or other contraceptives. Basil Henriques, vice-president of the National Association of Boys’ Clubs, chairman of East London Juvenile Court and instigator of the vending machine byelaw, recalled talking to a boy of fifteen who was seen going off with a well-known prostitute. He asked the boy if he was feeling annoyed with him for having been instrumental in removing slot machines from the streets. ‘‘Not particularly’, he casually replied, ‘I can always get one when I want from my father’s shop’’. His father was a barber.[1]

Examining the commercial status of contraceptive goods then serves an important reminder that sex, birth control and contraceptive supply have long been moralised, medicalised and subject to complex negotiations. The buying and selling of contraceptive goods like condoms has a long and contested history, but we see that the interwar period itself, a period during which old and new ways of thinking and talking about sex and sexual behaviour jostled uncomfortably against the other, became a significant turning point in the sexual health of Britain. It is only by paying attention to the beginnings of the open public discussion of birth control in this period that we see where and how negotiations over mass contraceptive consumption began. 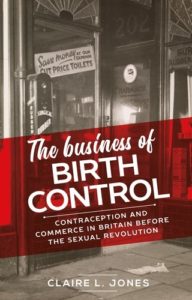 The business of birth control is available now. Claire L. Jones is Senior Lecturer in the History of Medicine at the University of Kent.

1. E. Lambert and Son, Special List of Domestic and Surgical Specialties (London: E. Lambert and Son, 1900), front cover. Credit: Wellcome Library, under Creative Commons License. Catalogue titles like this one were disguised; there was no mention the contraceptives they promoted.