To try and understand how images of the pandemic were being represented in the Australian news media, Chari Larsson began keeping a journal:

Our memories are malleable, they change over time. Memories can, however, crystallise through repetition. One of the most interesting things about memory is it is distinctly visual. With time, dramatic events reduce to a series of still images, which psychologists call “flashbulb memories”. Retrieving them is akin to rifling through a visual database.

The history of war photography offers many powerful examples of how memory and photographic images work together to symbolise entire events.

Consider one of the most famous news images from the Vietnam War, Nick Ut’s image of nine-year old Phan Thị Kim Phúc, badly burned and running down the road after a napalm attack. Or the Abu Ghraib photographs of prisoner abuse in the American military.

Viruses are distinctly anti-spectacular. They are invisible. We can, nevertheless, capture their impact. In 1990, at the height of the HIV/AIDS crisis in America, Life magazine published an image of a dying man, David Kirby, surrounded by his anguished family. Therese Frare’s photograph was credited for humanising HIV and raising much needed awareness.

We are still in the early days of this pandemic. It is not too premature, however, to start writing its history through images. Here are some of the photos that captured the impact of COVID-19 in Australia. 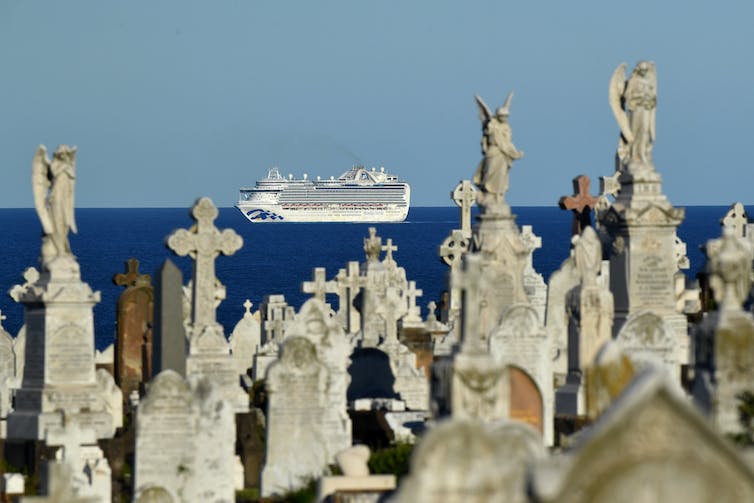 Networks of globalisation, such as the tourism industry, helped spread the virus between countries. This image was taken from the Waverley Cemetery, in Sydney’s east in early April. Tightly framed by gravestones, the Ruby Princess cruise ship intersects with the strong blue of the horizon.

Sydney is reimagined as an ancient burial site, a necropolis, a city of the dead.

It is not unusual for cruise liners to sit off the city’s coast. This photograph is chilling, however because of the large cluster of COVID-19 infections linked to this ship. When Joel Carrett took this photograph, passengers had already disembarked, and health authorities were scrambling to control community transmission.

Sometimes, images are powerful because they have long historical links. Ships have historically been carriers of disease, treated suspiciously by coastal towns and ports.

During the height of the Black Death in the 14th century, the citizens of Venice realised infected persons were on ships and the best defence was isolation. The modern term quarantine is derived from the Italian quaranta giorni, the 40 days vessels were kept offshore.

Read more: Fleas to flu to coronavirus: how ‘death ships’ spread disease through the ages

We were still learning how to socially distance in March and adhere to the government’s advice to “stay at home” when images of beach-lovers making the most of Sydney’s glorious Indian summer went viral on social media. 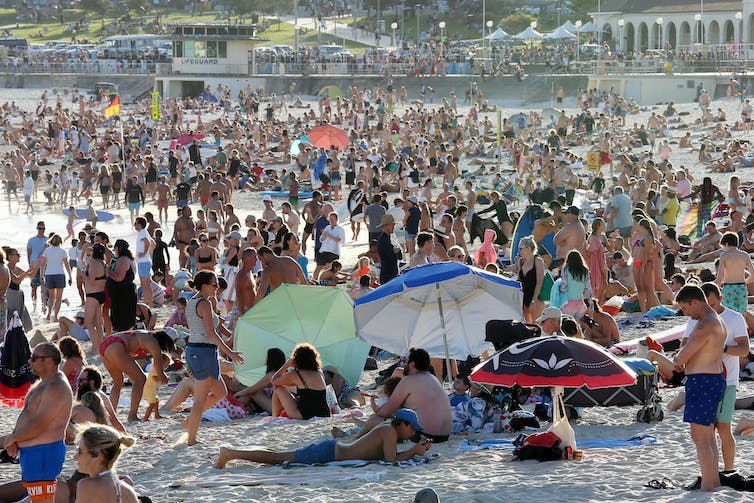 The beach occupies a sacred place in our national psyche: a place of leisure and of freedom. What was ominous about this image, however, was the crowd’s ability to render a usually benign activity into a menacing threat.

The most visceral signs of an economy in free fall came in late March with long queues of people waiting outside Centrelink offices across the country. As the myGov website collapsed under the strain, people were forced onto the streets, echoing scenes from Depression-era unemployment. 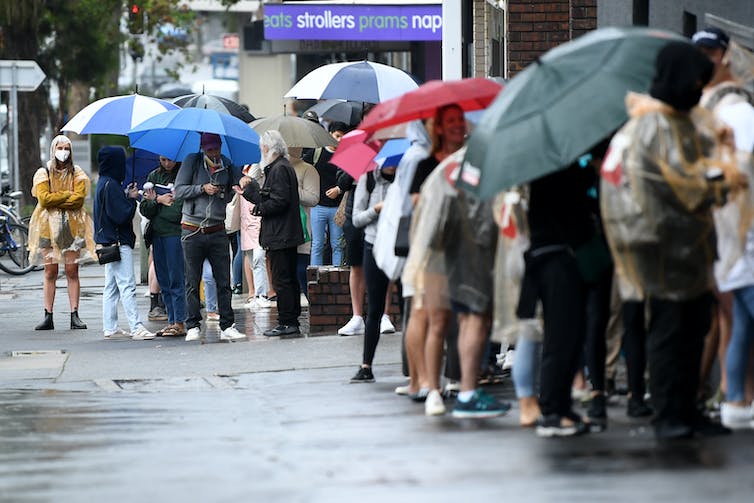 This photograph is cropped, leaving the viewer’s eye to run down the line of umbrellas, before pausing to rest on the woman in the yellow jumper and clear poncho. Her body language speaks of exasperation and frustration.

The image is taken at street level, a powerful levelling effect: the spectator joins the queue. 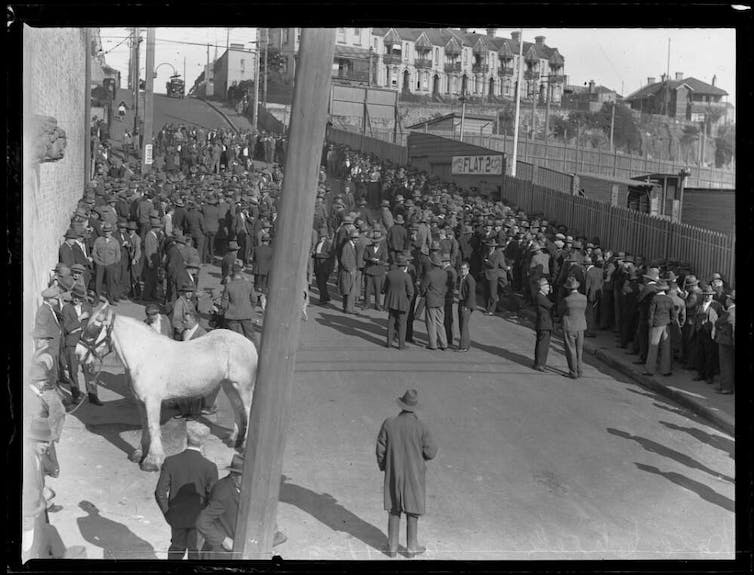 A very different strategy is at play in this 1932 image of the dole queue at Sydney’s Harold Park. Here, the photographer captures the group from an elevated position. This creates the effect of “hovering” above the queue like a bird. The spectator remains separate and apart from the crowd. The telegraph pole reinforces this division.

In March, supermarket shelves were emptying as Australians started panic buying essentials such as toilet paper, pasta and rice. 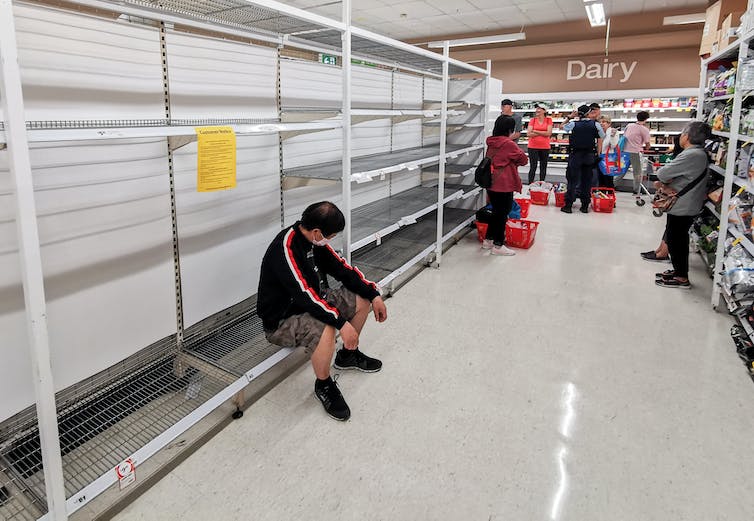 The idea of an image being active and capable of influencing our behaviour is underscored by photographs of empty supermarket shelves. Images such as these helped fuel further panic buying, reinforcing the misconception we were running out of food.

In this image, the bare shelves retreat, drawing the spectator’s eye diagonally backwards towards the far wall. People wait patiently while maintaining a careful distance from each other. The spectator’s eye returns to rest with the central seated figure. His posture indicates fatigued resignation.

Panic buying is not unprecedented in Australia. During World War II, food and clothing rationing was introduced to control consumption and ensure equitable distribution of resources. 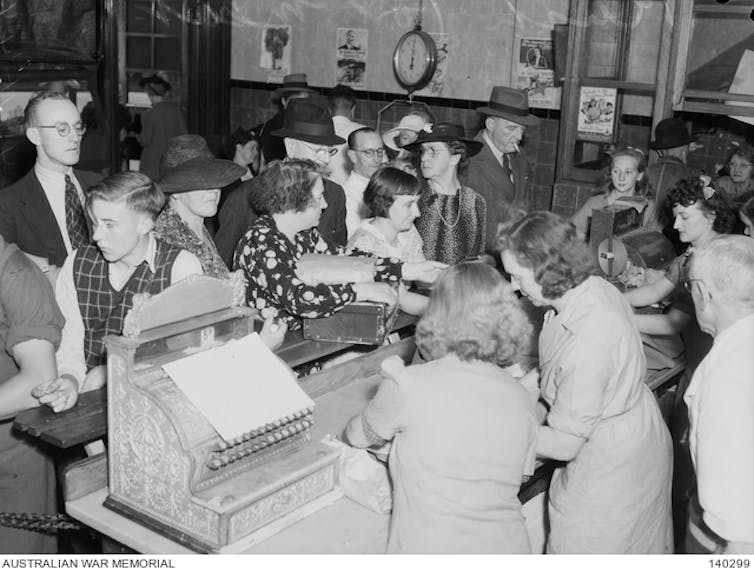 This archival image shows people in Melbourne stocking up on meat in 1944 in advance of impending rationing. The small enclosed space feels claustrophobic as shoppers crowd in, waiting to be served.

Physical distancing is a luxury not everyone can afford. COVID-19 thrives in dense living spaces, making visible class and race divisions. The early July lockdown of nine public housing towers in Melbourne was a blunt reminder the pandemic embeds itself in communities that house some of our most vulnerable. The towers were presented as crime scenes, sealed off with police tape. 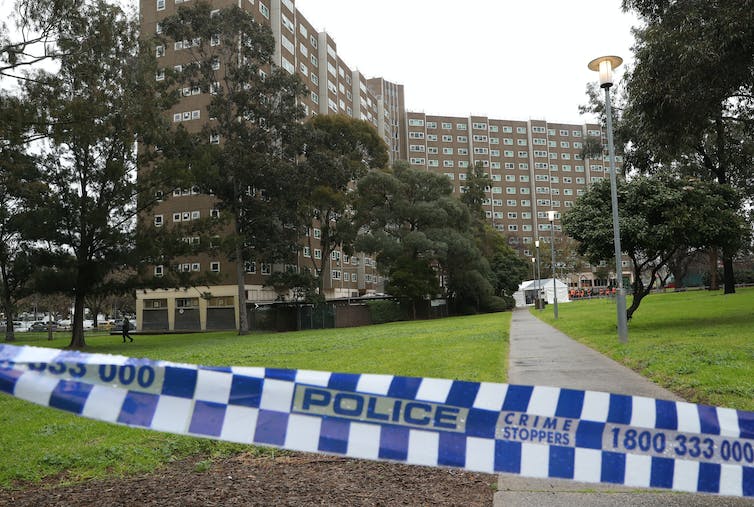 David Crosling’s photograph is striking because of its distinct lack of people. The police tape occupies the immediate foreground, while the towers rise threateningly in the distance.

On closer inspection, a solitary figure can be detected in the left middle ground. The pathway leads the viewer’s eye straight to a COVID-19 testing tent. The site is registered as a crime scene; a barrier is placed between the spectator and the towers.

The absence of people became a foreboding sign of what was to come: Melbourne’s “hard lockdown”.

The atmosphere is bleak and unnerving. An empty city is a lonely city. A city needs its people. Today, the usually bustling alleyways in Melbourne’s CBD lie mute, waiting for the stage four restrictions to pass. 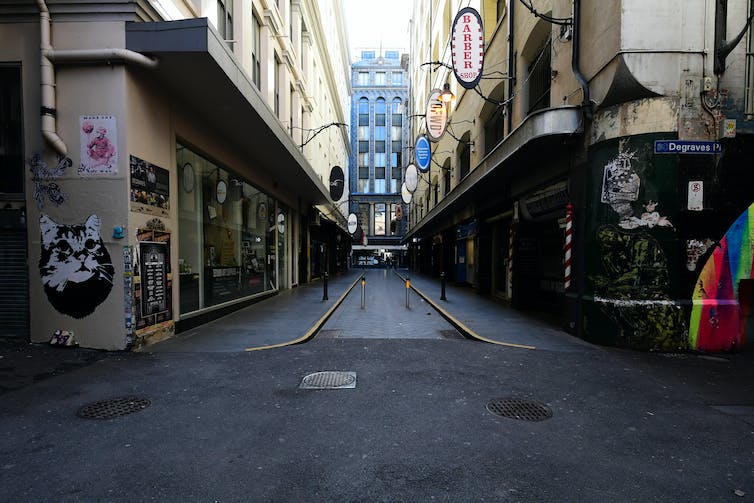 An eerie quality emerges when architectural landscapes are silent and empty. Usually an index of vitality, the street art in the foreground of the image is transformed, becoming a trace or relic of former human activity.

Images of Melbourne devoid of its people resonate with Eugène Atget’s photographs of the “old Paris”. Working at the turn of the 20th century, Atget focused on documenting the old, disappearing streets of Paris under pressure to modernise. 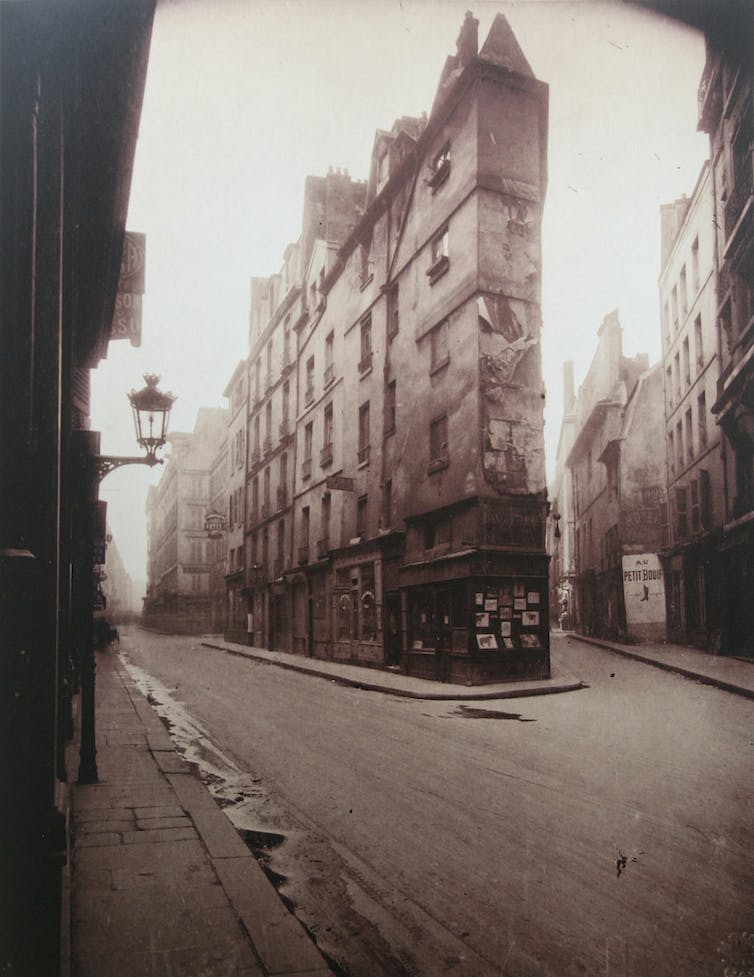 On the corner of rue de Seine and rue de l’Echaudé, photographed in 1924. Eugène Atget/Wikimedia Commons

Writing in the 1930s, German philosopher and essayist Walter Benjamin observed Atget’s images were like deserted crime scenes “photographed for the purpose of establishing evidence”.

They demand a specific kind of approach; free-floating contemplation is not appropriate to them. They stir the viewer; he feels challenged by them in a new way.

A crime scene asks more from its spectator than just viewing passively. Instead, the spectator becomes a witness or bystander.

Read more: Friday essay: the uncanny melancholy of empty photographs in the time of coronavirus

As the virus asserts its grip, the face mask has now become a symbol of the next phase of our collective efforts to suppress COVID-19. 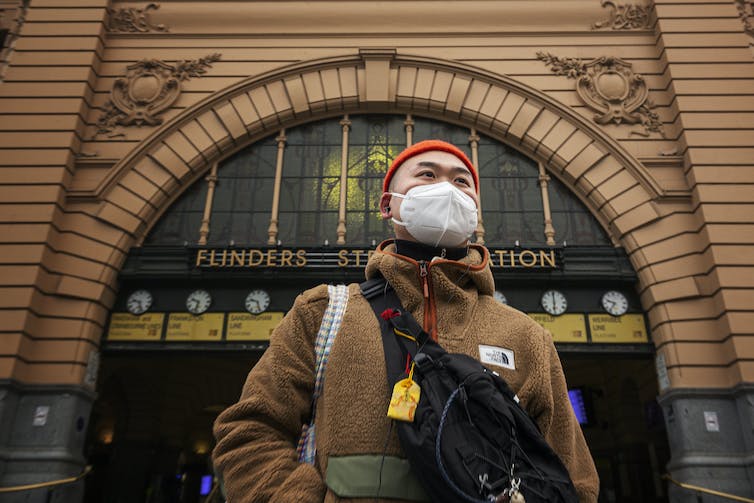 Will poses for a photo wearing a mask in front of Flinders Street Station in Melbourne, Friday July 17, 2020. AAP Image/Daniel Pockett

The practice of wearing a mask in the times of disease and pandemics has a long history. The medieval Latin word masca ominously means “spectre or nightmare”.

In the 17th century, plague doctors were recognised by their distinctive beak-like masks when attending sick patients, protecting the doctors from “bad air” and preventing contagion.

Centuries on, the basic premise of creating a barrier between the patient and the health workforce remains remarkably the same. 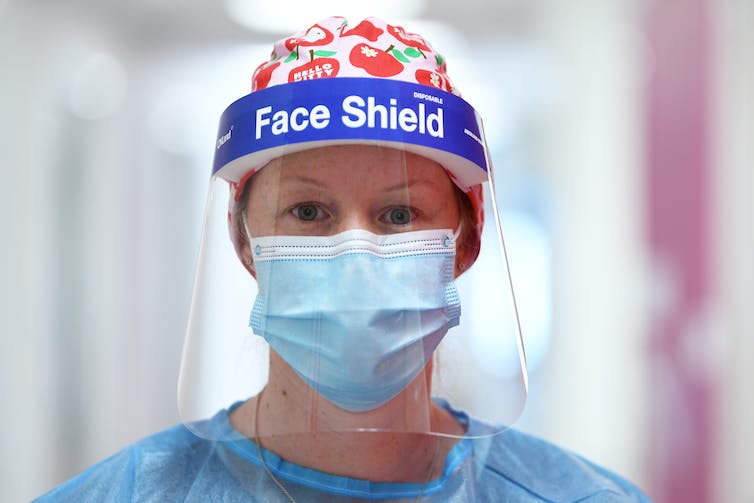 Australia has avoided the rampant transmission and devastating loss of life seen in parts of Europe, the USA and Brazil. Our mortality rates, nevertheless, are steadily creeping upwards as the pandemic spreads, particularly in aged care facilities.

We haven’t seen images like the overflowing intensive care wards in Italy, or the drone footage of New York’s mass graves. For privacy and ethical reasons, photographs from inside aged care homes and intensive care wards are rare. Our understanding of the deaths is thus shaped by personal photographs of COVID-19’s victims released by their families or photos of the exteriors of aged care homes. 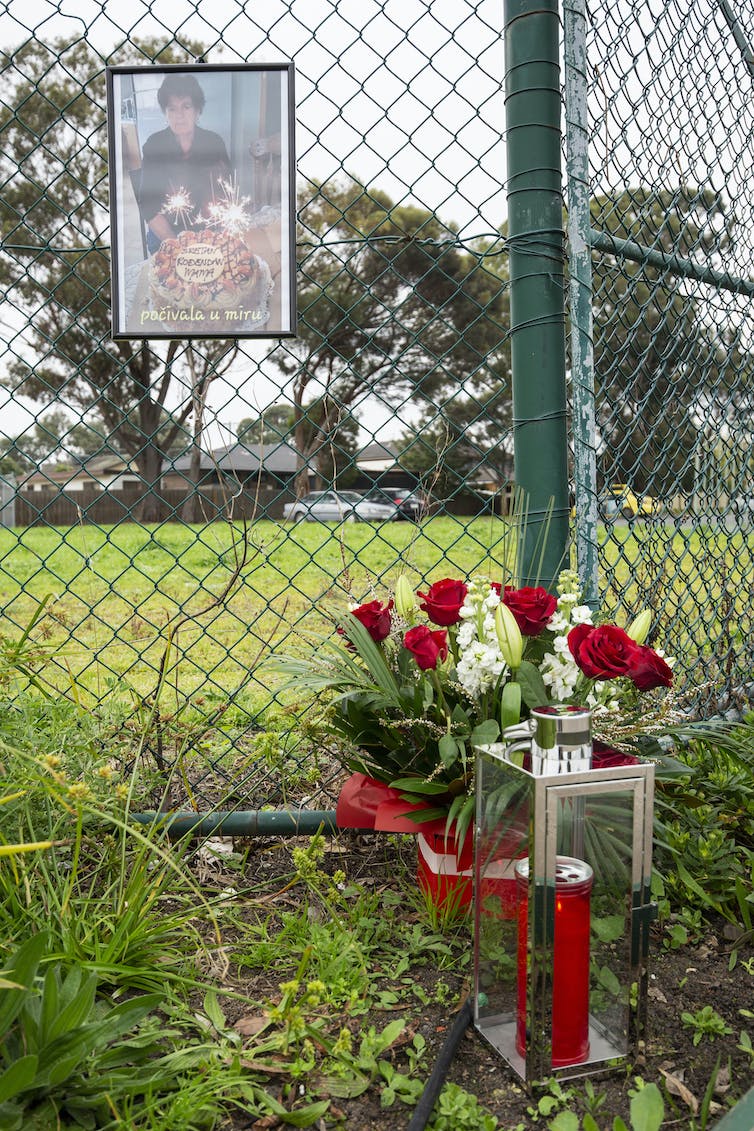 In late July, temporary memorials were set up outside one of the hardest hit facilities, St Basil’s Home for the Aged. Here, fences create a barrier between the photographer and the buildings. For the viewer, the physicality of lockdown is reinforced. 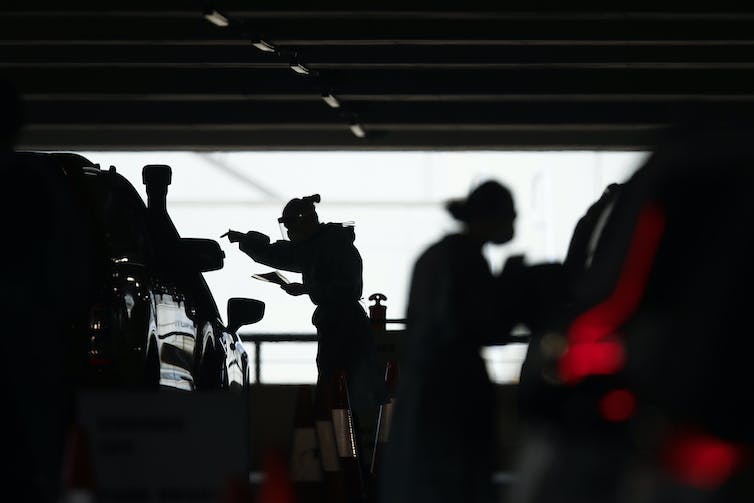 Widespread testing is proving crucial to controlling the pandemic. Here, healthcare workers are captured working at a drive through clinic. The camera’s lens is focused on the middle ground, with the staff rendered crisply in silhouette. Healthcare workers are our first and last line of defence against COVID-19.

There is unlikely to be one single photograph that comes to symbolise the pandemic. But it is possible to start reflecting on images that have been instrumental in shaping policy and debate.

These images serve as a chronicle of the disorientating early days of COVID-19 in Australia.

This article is republished from The Conversation under a Creative Commons license. Read the original article.

Chari Larsson is Lecturer in Art History at the Queensland College of Art, Griffith University. Didi-Huberman and the image is available to buy now.