Unlike the vast majority of the population, I’m going out more in October 2020 than I was this time last year. My editors at Manchester University Press have the patience of Job, but there are limits. In autumn 2019, I locked myself in my Leeds flat, determined not to emerge until I had final copy of Following Franco: Spanish Politics and Culture in Transition to submit. I booked a trip to Buenos Aires to give myself a pre-Christmas reward. Come December, I was still thrashing out final details in sunny Argentina. Dave, my old tutorial partner in Spanish, laughed about the book being my Chinese Democracy, the long-awaited Guns N’ Roses album that took a decade to record and was a critical and commercial disappointment on release. It is for others to judge whether my book does justice to the complexities of Spain’s Transition to democracy but, unlike the lacklustre return of the heavy metal titans, I am confident that this publication constitutes the highlight of my career so far.

I was awarded a Leverhulme Early Career Research Fellowship in 2010 to write a monograph on the cultural politics of Spain’s Transition to democracy. The plan was for it to appear in November 2015 to coincide with the fortieth anniversary of the death of General Francisco Franco, the illegal insurrectionist who had ruled Spain for thirty-six years. My next target, also missed, was for publication in December 2018, four decades after the signing of Spain’s democratic constitution. Habitual procrastination aside, canonical accounts of the Transition and the socio-cultural fabric of the Spanish state have been undermined to an extent that few, myself included, would have predicated when I first embarked on the project.

It is axiomatic to the point of cliché to claim that historical writing tells us at least as much about the present moment as the past. Nonetheless, it became evident during the gestation of this project that the dialectics between the then and the now were becoming increasingly co-dependent in twenty-first century Spain. Over the course of the last tumultuous decade, sacred totems of the Transition have been systematically dismantled: the monarchy came into disrepute; political start-ups challenged the two parties that had alternated in power for three decades; and the Catalan independence movement heralded the greatest constitutional crisis since the failed coup attempt of 1981. Spaniards are divided between those who envisage the Transition as a model of consensus from which today’s electorate and politicians would do well to take as an example or, alternatively, as the original sin that gave rise to Spain’s moral, political and economic bankruptcy in the present-day. The different arguments advanced in Following Franco are, both individually and collectively, underpinned by the belief that an awareness of the cultural politics of the thirty year period between 1962 and 1992 is as vital for understanding contemporary Spain as the three years of the Civil War (1936-39) were for the country’s passage from dictatorship to democracy.

The book entered production just as we were becoming aware in Europe that COVID-19 was a game changer. I was supposed to fly out to Barcelona from Manchester on 19 March before journeying down to Castellón to write a piece for The Guardian on the return of dwarf bullfighters to the ring. First the comic taurine spectacle and then my flights were cancelled. Between March and July, when I returned to Spain to cover the first post-Covid corridas for The Economist, the population endured arguably the strictest lockdown in Europe, with mortality rates amongst the highest in the world. This book depicts a pre-COVID 19 world, and yet the fallout of the pandemic has brought many of the trade-offs and tensions it discusses into sharp relief. In August 2020, Emeritus King Juan Carlos effectively fled Spain to take refuge alongside his vast and largely unexplained private fortunes in the United Arab Emirates to stop the monarchy being brought further into disrepute at a time when the public health system had been brought to the brink of collapse. His contacts in the Arab world represent a crucial but under-explored aspect of Spain’s ad-hoc democratisation.

A more scrupulous monarch would perhaps have been unable to transform Spain from an anachronistic dictatorship to member of the European Economic Union. The crowning paradox of the Transition is that the democratisation process relied on frequently underhand non-democratic methods. Such pragmatism was tolerated and even championed for as long as the results were viewed favourably. A shared desire to avoid another Civil War at any cost enabled the interests of Francoist elites to be preserved. Madrid remains divided between the prosperous north and the more deprived areas of the South, which have been targeted for localised lockdowns amidst spiralling infection rates. In late-September, riot police were employed to quash largely peaceful protests against inadequate healthcare provision in Vallecas, a hotbed of trade union activism during late Francoism and the Transition, where an entire generation was decimated by the influx of heroin in the 1980s. As with all Spanish citizens, the inhabitants of this working-class neighbourhood of the capital enjoy higher standards of living and greater personal and political rights in 2020 that their counterparts did in 1975. Less clear is the degree to which the horse-trading and compromises underpinning the Transition have facilitated or circumscribed the nature and degree of such advances.

On learning that I am writing a book on the period, the most common question posed to me by Spaniards is whether I consider the Transition to be a success or failure. Staking ones colours to the flags on this matter rivals the divisions between pro- and anti-secessionists in Catalonia as the most polarised and polarising question in contemporary Spanish politics. After a decade of research, the only judgement I feel qualified to make is that the Transition could have gone better, but it also could have been a whole lot worse. What runs the risk of being dismissed as an underwhelming non-committal cop-out will, I trust, find sympathetic readers who instead see an antidote to the political and commercial traction of antagonism amidst the echo chambers, hyperbole and fake news of the digital age.

Following Franco is available now. Duncan Wheeler is Professor and Chair of Spanish Studies at the University of Leeds. 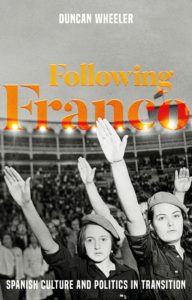