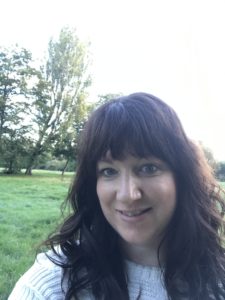 Hi there! I’m Jen Mellor, a Production Editor at Manchester University Press, and for this year’s University Press Week theme of Active Voices, I’m taking you on a tour of MUP books and journals that relate to activism… some new books hot off the press, some titles from our backlist, and maybe even a preview or two of books that aren’t out yet. And in the interests of staying ‘active’ myself, I’m going to show you some of my favourite spots in Manchester that also happen to have a link to activism. Excited? Of course you are! 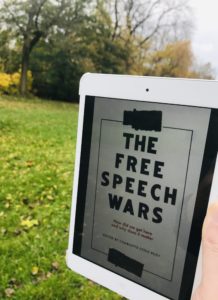 First stop is The free speech wars edited by Charlotte Lydia Riley, a fantastic collection about contemporary free speech, its historical context, and the influence of universities, mass media and the internet on the debate. It publishes later this month. And what better place to show it off than Platt Fields Park, which was home to Manchester’s Speaker’s Corner, where activists, poets and thinkers turned out to speak every Sunday for over 50 years up until the late 1960s. 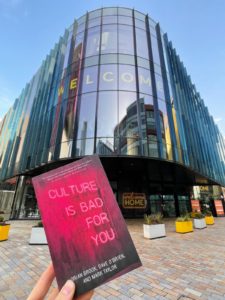 Culture is bad for you by Orian Brook, Dave O’Brien and Mark Taylor is out now, and it’s a vital read about inequalities in the cultural and creative industries in terms of audience and workforce, cultural consumers and producers. There is a lot of work to be done, but it’s brilliant to see places like Home in Manchester developing Engagement and Talent Development programmes to encourage access and support for all. 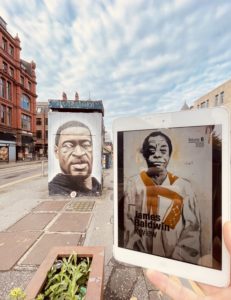 James Baldwin Review is an annual open access journal published by MUP, and is one of my favourite projects to work on. Scholarly and creative, it explores the cultural and political influence of Baldwin’s writing and activism. The artwork on this year’s cover, by Fahamu Pecou, is stunning. The George Floyd mural in Manchester’s Northern Quarter, by Akse P19 – also stunning. 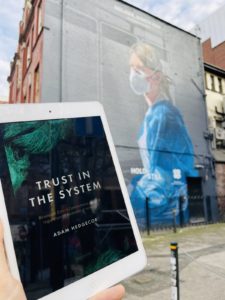 I have never been more aware of, or grateful for, our National Health Service than in 2020. Adam Hedgecoe’s book examines the systems and decision-making processes in Research Ethics Committees, as they support regulation of all kinds of research and help shape the future of medicine. It’s called Trust in the system and it publishes in December. 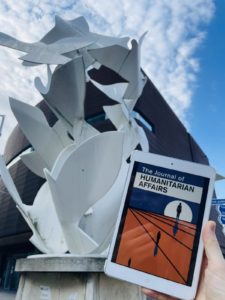 The Journal of Humanitarian Affairs is another MUP open access journal that I look after in production, and it’s incredible to read about the work, research, and commitment to doing good in this field. Here I am outside the People’s History Museum visiting the Doves of Peace sculpture by Michael Lyons, which celebrates that exactly 40 years ago, in November 1980, Manchester was the first city in the world to declare itself a nuclear-free zone. 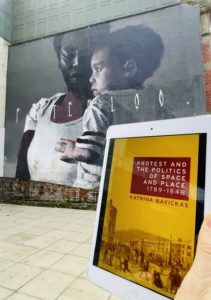 Even though the People’s History Museum (the national museum of DEMOCRACY!) is closed for the moment, you can walk around the back of the building and see the HUGE mural created for the bicentenary of the Peterloo Massacre in 2019 – in the words of the artist who created it, Axel Void, ‘This is a tribute to the sacrifices of ordinary people, a tribute to those with nothing who gave their everything, to stand against injustice’. And there’s plenty about activism and Peterloo in Protest and the politics of space and place by Katrina Navickas. 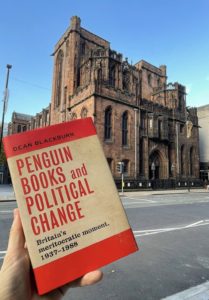 Isn’t it beautiful?! Who knows if I’m talking about Dean Blackburn’s new book Penguin Books and political change and its exploration of how Penguin’s inexpensive ‘Specials’ paperbacks made good books and important ideas available to all (IT PUBLISHED YESTERDAY! BUY IT NOW!), or the stunning neo-Gothic John Rylands Library behind it. Enriqueta Rylands established the library as a monument to her husband – it opened as a public library on 1 January 1900, was the biggest act of library philanthropy the country had ever known, and Enriqueta was the first woman to be awarded the Freedom of the City of Manchester as a result. BOOKS ARE BRILLIANT! AND IMPORTANT! 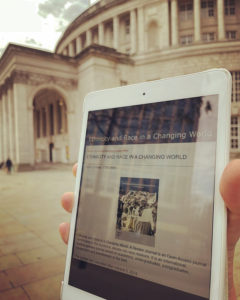 Manchester’s Central Library in St Peter’s Square houses the Ahmed Iqbal Ullah Race Relations Resource Centre. They work with schools and community groups on developing archives and oral history projects, and have hundreds of books on the history of race, migration and ethnicity. Loads of their materials are available online, including all back-issues of the open access journal Ethnicity and Race in a Changing World, published in association with MUP. 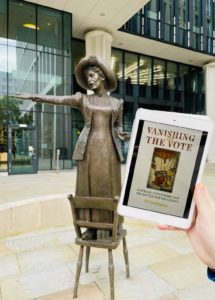 VOTES FOR WOMEN! DEEDS NOT WORDS! Emmeline Pankhurst was born here in Manchester. Here is Hazel Reeves’ 2018 statue of ‘Our Emmeline’ with Vanishing for the vote, Jill Liddington’s brilliant MUP book about the 1911 ‘battle for the census’. 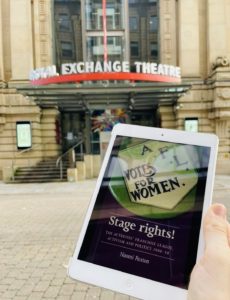 MORE RIGHTS FOR WOMEN! Naomi Paxton’s book Stage rights! focuses on The Actresses’ Franchise League, the first feminist political theatre group of the twentieth century, and comes out in paperback this month. The Royal Exchange Theatre in Manchester knows a bit about feminism and politics on the stage, with writers, directors and actors including Maxine Peake, Sarah Frankcom, Bryony Shanahan and Julie Hesmondhalgh being household names around here. 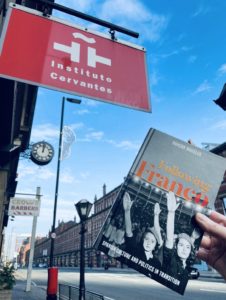 Duncan Wheeler’s new book Following Franco is a lively discussion of culture during Transition in post-Franco Spain. And here we are at the Instituto Cervantes, which promotes the language and culture of Spain in Manchester, and (fun bonus fact…) this beautiful building on Deansgate used to be part of the Manchester Free Public Library, the first library in the UK to be established after the Public Libraries Act of 1850. 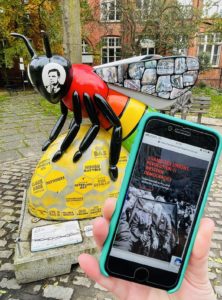 I’ve come to Sackville Gardens to pay a visit to the LGBTQ+ Queen Bee, part of 2018’s Bee in the City public art trail, and now a permanent resident here in the Village. Seems an appropriate place to mention The same-sex unions revolution in Western democracies, Kelly Kollman’s MUP book about the development of policy and laws to recognise same-sex union in different countries. The eye on the bee depicts Alan Turing, and if you look really closely, you can see the Alan Turing statue on his bench in the background. 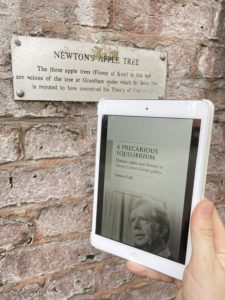 That’s it! We’re done! I’m finishing my tour at the University of Manchester’s north campus, where I’ll leave you with this book about Jimmy Carter, who started University Press Week in 1978. He wanted ‘to honor the important role of university presses in advancing and preserving knowledge’, so I’ve brought his book to visit Manchester’s descendants of Isaac Newton’s gravity tree. Right, I’m off for a lie-down. Thanks for joining me (and Isaac and Jimmy and Emmeline and James and Enriqueta…).