‘This book provides an up-to-date analysis of the social, material and literary forms of devotional identities during England’s Long Reformation.’

There are so many….  most recently John Coffey (eds) The Oxford History of Protestant Dissenting Traditions, Volume I: The Post-Reformation Era, c. 1559–c. 1689 (Oxford University Press, 2020).

While compiling the book, we presented our research at conferences in France, Canada, South Africa, Italy, England, Scotland and Wales (quite the global sojourn).

A combination of computer, longhand, and iPad.

The press has recently produced a series of outstanding scholarly works in the field. It’s a real honour to be placed among them.

A monograph about Religious Writing and Popular Piety in Early Modern England.

To include more visual illustrations of the rare or recently discovered manuscript works discussed in the volume.

Between the two of us too many to list here, but mostly colleagues and dear friends. 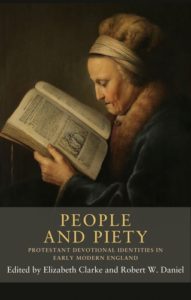 People and piety is available now.

Elizabeth Clarke is Professor Emeritus in English and Comparative Literary Studies at the University of Warwick.

Robert W. Daniel is Associate Tutor in English at the University of Warwick.