‘To understand Dublin,’ Oliva Robertson wrote, ‘one must know its life in its fashionable squares and in its slums, in its suburbs and in its Georgian tenements; the life of its artists and students … the life of the old with their memories and the fresh hope that springs up with children; and the life that comes to us from airport and harbour.’ [1] Writing in the 1950s, Robertson was taking stock of the changes that had been wrought in the city in the preceding decades, its characterisation in the writings of James Joyce and Seán O’Casey, and the challenges that still remained for Dublin to become a worthy capital of the young Irish Republic. Robertson’s memoir of mid-century Dublin contributed to the considerable body of writing on the city (both real or imagined), creating a vivid textual picture of life in its houses, streets, and squares. To date, however, little attention has been paid to the equally varied visual representations of the city created by artists in Ireland during the late nineteenth and early twentieth centuries. Painting Dublin, 1886 – 1949: Visualising a changing city seeks to redress this imbalance, exploring the representation of Dublin in visual art (chiefly painting and print), with a specific focus on the lives and artworks of Walter Frederick Osborne (1857–1903), Rose Mary Barton (1856–1929), Jack Butler Yeats (1871–1957), Harry Aaron Kernoff (1900–79), Estella Frances Solomons (1882–1968), and Flora Hippisley Mitchell (1890–1973).

The people and places described by Robertson are depicted in detail by James Mahony in his watercolour, Dublin from the Spire of St George’s Church, Hardwicke Place, used on the cover of Painting Dublin. From this vantage point, the artist captured the architectural and sculptural features of Dublin in the 1850s: the eighteenth-century Georgian squares (Mountjoy, Parnell, Merrion), early nineteenth-century civic buildings such as the General Post Office, and some of the city’s imperial monuments: Nelson’s Pillar, and the equestrian representations of William III and George III on Dame Street and in St Stephen’s Green. This was a city on the cusp of change: over the next ninety-five years to 1949, it witnessed a social and political revolution, played out in streets, parks, and buildings.

The five artists featured in Painting Dublin share an interest in depicting Dublin in their art, but represent a range of social backgrounds and political traditions, from tacit unionism and support for Home Rule, to committed socialism and nationalism. In this way, the lives of the artists reflect the trajectory of the period 1886 – 1949, as Ireland’s status shifted from empire to republic. The book opens with chapters on Osborne and Barton that revel in the late-nineteenth century city: outlining their social standing in the city and how their artistic training outside of Ireland influenced their vision of the city of their birth. Interwoven with this analysis is the social history of the city at this time, and how poverty was viewed through the lens of the picturesque. Following this, chapter three picks up the thread in the opening decades of the twentieth century with the work of Yeats. Perhaps the most familiar name in the book, this chapter delves deep into the artist’s exploration and depiction of the seamier side of city life, the reception of jazz music and dancing and the morality of the Irish Free State. Yeats’s interest in the social side of life in Dublin is mirrored by Kernoff, who, although working around the same time as the older artist, moved in very different social and political circles. The son of Russian-Jewish migrants, Kernoff was dedicated to leftist politics throughout his life, a fact reflected in his concentration on industrial and labour subjects. The final chapter of Painting Dublin focuses on Solomons and Mitchell, returning to themes raised in relation to Barton and the narrative of the city’s history. Overall, I hope that this book shows that Dublin’s artists were actively engaging with the city as a subject through these decades, revealing its daily life and rhythms.

This book was written during an Irish Research Council Government of Ireland Postdoctoral Fellowship at the UCD School of Art History and Cultural Policy. During this fellowship I expanded on my previous doctoral research to broaden the scope of the book, and incorporate new material and sources. Returning to the subject after two and a half years of working in the National Gallery of Ireland was challenging but enjoyable, and I was immensely lucky to be based in the UCD Humanities Institute where I met other scholars working across a range of disciplines. This support, both institutional and social, was crucial to getting Painting Dublin written, and I would recommend it to anyone thinking about their first monograph or developing their postdoctoral research. As any scholar working with images knows, publishing can be expensive and I am grateful for the additional financial assistance provided by the National University of Ireland’s Grants towards Scholarly Publications Scheme and MUP’s Emma Brennan for her help in putting together the application for this. Since this research began, I have been walking in the footsteps of these artists as I go about my own daily routines in the city, catching glimpses of their compositions as I cross a bridge or turn a corner. Their paintings and prints remind us that the city is an ever-changing, expanding place but that we are connected to generations of artistic Dubliners through the artworks they left behind. 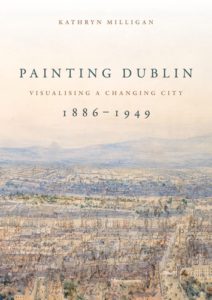