By Jonathan Bolton
Author of The Blunt Affair: Official Secrecy and Treason in Literature, Television and Film, 1980-89

In writing a book about the cultural response to the Blunt Affair in the 1980s, it was never my intention to resurrect Anthony Blunt’s exposure as the fourth man in the Cambridge spy ring in order to offer some poignant commentary on our current tolerance of official secrecy. However, while I was working on the book I was struck by the degree to which we’ve regressed on, or at least failed to enforce, the public’s right to know. In fact, as I studied the initial political and cultural response to Blunt’s treachery, much of which focused on the relationship between treason and homosexuality, friendship and loyalty, Margaret Thatcher was one of few observers to be outraged by the official secrecy that shielded Blunt. Not only was she appalled to learn that a British subject had been a Soviet spy and given immunity by the intelligence services, but that his treachery was kept from the public.

As a result of his deal with MI6 in 1964, in exchange for his testimony, Blunt was allowed to keep his directorship at the Courtauld Institute, remain Surveyor of the Queen’s Pictures and, most aggravating to the Prime Minister, retain his knighthood. In the intervening years, the public, if they knew him at all, knew him as Sir Anthony Blunt, distinguished art historian and the world’s leading expert on French Neo-Classicism and the paintings of Nicholas Poussin. His exposure, of course, ruined his reputation, stripped him of his knighthood, and made him the reviled traitor he most certainly would have been had MI6 disclosed his treachery in 1964.

By the early 1980s, the most pressing issue raised by Blunt’s exposure was this: should one put loyalty to one’s friends, as E.M. Forster had argued in “What I Believe” (1938), before one’s love of country, especially when, for men such as Blunt and fellow Cambridge spy, Guy Burgess, one’s country had made criminals of them simply for being gay?

This question of conflicting loyalties was central to Julian Mitchell’s enormously successful play, Another Country (1981), which staged the formative public-school experiences of Guy Burgess. This theme of friendship and loyalty was revisited in Robin Chapman’s One of Us (1986), which dramatized the intimacy of Blunt’s and Burgess’s friendship, and the bonds of loyalty called upon to keep their treachery secret. A few years later Alan Bennett, in A Question of Attribution (1988), dramatized Blunt’s private suffering under his dual life as an MI5 informant and visual arts scholar in ways that sought to recover the infamous traitor’s humanity and, ambitiously, win sympathy for him. At a time when the AIDs crisis and its consequent homophobia dealt the gay rights movement serious setbacks, it is understandable that playwrights were preoccupied with the sexuality of the Cambridge spies and sought to redeem the bonds of loyalty that had long protected the gay community.

However, from our vantage point forty years later, the most relevant consequence of the Blunt Affair has to do with withholding information that has no bearing on national security, and Thatcher’s warning about official secrecy and the public’s right to know has proved to be prescient, even if her administration’s handling of intelligence was equally opaque. Her government, for instance, did not see the need to inform the British public that nuclear missiles were to be installed on Greenham Common, and it prosecuted Sara Tisdall under the Official Secrets Act for disclosing that information to the press. Her government again did not find it in the public’s interest to know that the Argentinian warship, the Belgrano, was actually in retreat from the British navy and outside the exclusion zone when it was torpedoed, an action that led to the unnecessary loss of over 300 Argentinian lives. When a senior civil servant, Clive Ponting, leaked the story to the press, Thatcher’s government tried unsuccessfully to prosecute him under the Official Secret Act. The Conservative government also used the Official Secrets Act to suppress publications that would have proved embarrassing, most notably Peter Wright’s bestseller, Spycatcher, which documented numerous illegal operations conducted by MI6 throughout the Cold War.

These invasive operations were lampooned in Tom Stoppard’s The Dog it Was that Died (1982), and exposed in Hugh Whitemore’s Pack of Lies (1983) and Breaking the Code (1986), as well as John le Carré’s A Perfect Spy (1986), works that disclosed the harmful and sometimes inept operations that intelligence agencies are up to. Then and now, the intelligence services indifference to citizens’ rights posed a very real threat to democracy and civil liberties in Britain. The Thatcher government would go on to invoke the Official Secrets Act countless times, usually in instances where they sought to avoid political embarrassment that had nothing to do with national security.

To observers in 2020, this level of secrecy in government and intelligence agencies should sound painfully familiar, as leaders of so-called Western democracies, in league with their intelligence directors, continue to withhold vital information from the public, most notably suppressing information about a potential global pandemic that has, to date, cost 1.5 million lives. The Blunt Affair seems a minor event in comparison to the current epidemic, but forty years on it reminds one that citizens do indeed have a right to know about matters that affect their personal safety and economic well-being, and that they have a right to know when their government makes mistakes or lies to them. It reminds us that once the problem of official secrecy becomes apparent, mobilized efforts—both cultural and political—to call attention to and protest against official secrecy can lead to reform and challenge official secrecy.

Whether or not the ’80s cultural response to the Blunt Affair led directly to revising the Official Secrets Act in 1989 is hard to say, but it was certainly representative of a widespread resistance to official secrecy. In the years following the 9/11 attacks, however, the majority of the public, under the fear of terrorism, has been inclined to favour safety over transparency, permitting government agencies to conduct panoptical surveillance without the need for court orders, and those who called attention to the intelligence agency’s invasion of privacy, including Edward Snowden and Chelsea Manning, have been declared traitors. This mindset has persisted, even under the current pandemic, and the citizen’s right to know remains a battle people are not especially willing to fight. 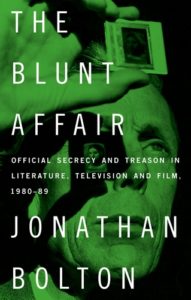