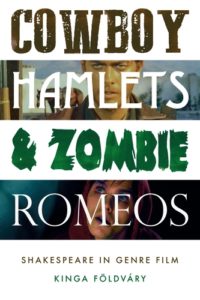 This book started out as a dilemma, as I suppose many books do, with a simple question, yet one that seemed to present an insurmountable obstacle at the time. I was struggling to bring some order into the chaos of a simple case study, a comparison of four different film adaptations, all based on the same Shakespearean play, The Taming of the Shrew. The four adaptations were relatively well-known: Zeffirelli’s spectacular costume epic from 1966, George Sidney’s musical film based on the 1955 Broadway hit Kiss Me Kate, Gil Junger’s 1999 10 Things I Hate about You, and a 2005 television Shrew (directed by David Richards) broadcast on the BBC as part of the ShakespeaRe-told series.

As I was looking at various scholarly studies of Shakespeare on film, trying to use their categories for my own purposes, I realised that most of those excellent studies were concerned with measuring film adaptations’ supposed distance from the so-called original, the dramatic source text – variations on what we call ‘fidelity criticism’, although offering wonderful, in-depth analyses, of course. As a result of their approach to the question, however, I usually ended up with three out of the four films in the same category – considerably removed from the original – but none the wiser about explaining the obvious differences among them. It was like trying to compare apples and oranges – pointless and frustrating – until I realised that I should not even try to set a musical next to a teenpic, or a made-for-television episode against a large-screen costume romance. What I could do instead is look at them in their natural habitat, as it were: see the musical as a musical, enjoy the teenpic as a teenpic, or the TV version as part of the miniseries in which it was broadcast – and suddenly my expectations were no longer at odds with my viewing experience.

Based on this simple realisation, that even adaptations based on literary classics can and should be discussed with an awareness of the films’ production medium, especially their cinematic genre, I started to collect and organise Shakespeare films along generic lines. At the same time, I also allowed myself to be immersed in genre cinema, getting re-acquainted with amazing cinematic classics, spending sometimes weeks on end, watching and rewatching works of John Ford, Douglas Sirk and Vincente Minnelli, early gangster films and mid-century film noirs, musicals and science fiction films, one after the other. This was, of course, a labour of love, and no great pain to endure, unless I think of the difficult sacrifices I had to make at the end. From the nearly endless treasure trove of films inspired by Shakespeare, I had to narrow down my scope to two groups: three genres from the classical Hollywood period, and three that gained new prominence during or since the 1990s. The first group includes the western, the melodrama, and the film noir-gangster family; the second part of the volume discusses the teenpic, undead horror (both zombies and vampires, I am happy to report), and the biopic.

What this colourful journey confirmed is that by placing the films in their generic context, we can easily answer questions that would otherwise remain hard to tackle. Can we call a film a Hamlet adaptation if the protagonist survives at the end? We certainly can, if the film in question is a western, in which the cowboy is expected to ride off into the sunset, as he dutifully does in Enzo G. Castellari’s Johnny Hamlet (1968, released in the USA as The Wild and the Dirty). It is equally rare to see Romeo and Juliet happily planning their future – but if their past included a zombie apocalypse, then in a romantic (horror) comedy we are less surprised to see a fatal wound curing, rather than killing the formerly undead protagonist, as it happens in the box office hit Warm Bodies (2013, dir. Jonathan Levine).

Without offering any more spoilers, suffice it to say that the volume discusses more than thirty films in detail, with screenshots illustrating key points in the interpretation, and it is still no more than the beginning of the journey (or so I hope). Not only do I wish to continue (watching and) writing about the significance of further film genres in even more Shakespeare adaptations, but I also hope that this approach to film adaptations will be taken up by other researchers, some of whom might venture into Austenland or Dickensian territory, followed by endless fields of new inquiry, to show that genre is still at the heart of moving picture production. 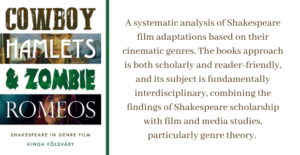