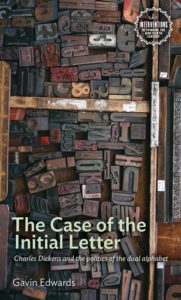 Francis Wheen identified ‘a Dickensian texture’ in parts of Capital, a texture which can be partly traced to the fact that both Dickens and Marx present a society characterised by the ‘personification of things and the reification of persons’ (‘Personificirung der Sache und Versachlichung der Personen’). There is a similarity for instance between parts of Chapter 1 of Capital and Dickens’s description of the second-hand clothes shops of Monmouth Street in Sketches by Boz (1836) where the old clothes try on new customers for size. But it is the explicit references to Dickens I want to draw attention to here and in particular to the way in which Marx, like many people in England at the time, identified Dickens’ characters with individuals and social types in the real world. Mr Pecksniff from Martin Chuzzlewit (1842-4) is the most frequently invoked by Marx and the most significant. And Dickens encouraged such acts of appropriation in this case by inventing the adjective ‘Pecksniffian’.

Dickens wrote Martin Chuzzlewit on his return from America in 1842 and the novel takes place partly there, partly in England. ‘Yes I am disappointed. This is not the republic of my imagination’, he wrote home from Boston. The American sections of the novel expose the elevated rhetoric of ‘Freedom’ and the ‘Land of Liberty’ as the fraudulent prospectus of a ruthlessly commercial slave-owning society. In the English sections of the novel the rhetoric which veils exploitation and self-interest is moral rather than political: Mr Pecksniff’s long-winded pleasantries and his moralising about ‘Virtue’ and ‘Truth’. He presents himself to his employees, apprentices and community as a personification of Goodness, even naming his daughters Mercy and Charity.

Analysing the parliamentary debate on the 1853 budget for the Chartist Peoples’ Paper, Marx wrote that Prime Minister Gladstone ‘astutely resolved to take the legislating Pecksniffs by what he knew to be their weakest side, adroitly screening the intense augmentation of the public burdens behind the pleasant and acceptable phrase of a “just extension of certain taxes, with a view to their final and lasting equalisation”‘. Gladstone, whom Marx elsewhere accused of ‘pietistic casuistry’, is clearly a Pecksniff speaking to Pecksniffs, the House of Commons a gathering of the Pecksniff family business.

Marx identified the literary as well as the political representatives of the English bourgeoisie as Pecksniffs in an assessment of the work of Thomas Carlyle written with Engels in 1850. Carlyle’s style, they argue, ‘is at one with his ideas. It is a direct violent reaction against the modern English Pecksniffery [‘Pecksniff-stil’] …whose circumspect verbosity and vague, sentimentally moral tediousness has spread…to the whole of English literature’. Carlyle, and by implication Dickens, are exceptions to, and critics of, the bourgeois discursive norm.

Marx’s references to the Circumlocution Office – Dickens’ satire on government bureaucracy in Little Dorrit (1855-57) – echo part of the critique of Pecksniffery and allow Marx to link – as Dickens himself was doing – the functioning of state institutions to a specific kind of evasive language. In the first draft of The Civil War in France (published in 1871 and written in English) he describes the elected representatives of the Paris Commune ‘doing their work publicly, simply…acting in bright daylight…not hiding itself behind circumlocution office’. Ten years later, writing in Der Volkstaat, he accused the parliamentary reports published by Hansard of collusion with Gladstone, favourably contrasting a succinct report in The Times with ‘the stilted, involved, complicated CIRCUMLOCUTION OFFICE style of the Hansard publication’; or, as the original put it, with ‘Circumlocution Office’ in English followed by Marx’s own hyphenated translation, the ‘Circumlocution-Office- (Um-die-Sache-herumschreibungsbüro-) Stil der Ausgabe im Hansard’.

Of course there are basic differences between the politics of Dickens and Marx. Dickens did not anticipate the overthrow of class society and his social radicalism was of a broadly paternalist kind. In addition, there is a difference between written German and written English which sometimes makes Dickens more directly relevant to Marx’s translators than to Marx himself. In my recent book, The Case of the Initial Letter, I argue that this linguistic difference was sometimes particularly important for Samuel Moore, the Manchester lawyer who was Marx’s principle nineteenth-century translator. In written German all nouns begin with a capital letter while English, like many other written languages, uses the initial capital to distinguish proper from common nouns. The so-called dual alphabet – the systematic combination of upper and lower case letters in a single text – is a feature of visible language which has no equivalent in speech and which always works, at least to some extent, metaphorically: elevated letters are for elevated things. This is the basis for Dickens’ satire on the Americans’ grand talk of ‘Freedom’ and ‘Liberty’, and his later novels sophisticated the technique. Albert Lammle in Our Mutual Friend (1864-65) ’has to do with traffic in Shares’ and the repetition of ‘Shares’ with its capital ’S’ first reifies and then deifies them (‘O mighty Shares!’). So should capital itself, either always or sometimes, be written with a capital ‘C’? Should the philosophical word ‘Subjekt’ retain its initial capital when it is translated into English and appears in its more lower-case English environment? The difference between the conventions governing the dual alphabet in German and English presents us with problems, but also with opportunities. For instance, Moishe Postone suggests that ‘by calling capital the Subject, Marx argues for the conditions of possibility that humans can become the subjects of their own history, but that’s with a small ’s’….The goal would be to do away with the Subject, to free humanity from an ongoing dynamic that it constitutes’.