The Netherlands has the reputation of a stable, law-abiding democracy. But the country has its other sides as well. Internationally it is seen as a hedonistic Mecca for drug tourists. Moreover, the past century the Netherlands has been a key hub of the international illicit drug trade. Drug markets have grown so extensively that they have fuelled other criminal activities and enterprises. By the 1990s the Netherlands was named ‘the Colombia of Europe’, or, ‘the international drug super market’. At the moment of writing Dutch media report on the Marengo trial against the presumably biggest Dutch gang of drug dealers and assassins ever. Lawyers and mayors are no longer safe for the violence of drug gangs. The Rotterdam harbour reports every so often a new record seizure of cocaine. Mexican cartels are set to use the Netherlands as springboard to the rest of Europe; and so on. If we may believe journalists and politicians, organized crime has all but taken over the Netherlands and a lot of this has to do with drugs.

Why have the Netherlands become a pivotal hub for the international drug trade? This question was the starting point from which I started to tackle the history of drug smuggling in the Netherlands. One popular explanation was the reputed exceptional tolerance of drug use in the country. However, this explanation was to me not satisfactory since tolerance did never extend to the large-scale illegal drug trade and smuggling: on the contrary.

Criminological research did not really start to study the development of an underground drug economy until c. 1990, when its expansion was already in full swing. Looking at this expansion as a historian I noticed an interesting and important problematic. In the early 1960s the Dutch state supposed that the illicit drug problem was under control. While illegal drug use took off after the mid-Sixties, the very word ‘organized crime’ (georganiseerde misdaad) was still more or less unknown in the Netherlands by 1970. So should we think that in the two decades between 1970 and 1990 a fragmented group of no more than one hundred professional criminals had completely changed the social structure of the Netherlands, introducing a shadow economy and society? Or could from a historical longer-term perspective more structural factors be identified? In what social and cultural networks and structures had drug smuggling become embedded, and how was this invisible ‘underworld’ related to the visible ‘upperworld’ of the Netherlands?

My research took me on a three-years journey through a wide range of historical and contemporary sources: archival material, police investigations, journalistic reports, academic publications, ego documents of police officers and drug smugglers, official statistics. At first, the results were bewildering, even apart from the one-sidedness and unreliability of most of this material. But patterns emerged. It became clear that there were no centralized organizations controlling the trade, no mafias or triads controlling drug supply from sinister headquarters far away. In fact, drug smuggling turned out to be rather opportunistic, horizontally organized, and heterogeneous. It involved criminals, yes, but it involved so much more. Since the introduction of the Dutch drug law (the Opiumwet) in 1920, pharmaceutical companies, Chinese shipping masters, chemical industry, fishermen and sailors, intellectuals and idealists from the sixties counter culture, and villages in the south of the Netherlands all had been involved or at least had looked the other way. Criminal entrepreneurs had become dominant in drug smuggling since they had the expertise and the tools to deal in an environment of illegality, but they had not started the drug trade. The police won many battles in the fight against drug smuggling: but the war continued, since the smugglers were embedded in social and cultural environments from which new smugglers arose again and again. While the design and implementation of the drug regulatory regime since 1920 was institutionalized and directed from above by the state, the patterns of the ways of operation of smugglers and producers showed all elements of a spontaneous order that I decided to call ‘criminal anarchy’. A criminal anarchy that was uncontrollable not in spite of, but because of its disorganized nature.

I do not think that criminal anarchy can be eradicated. But perhaps it can be contained when understood correctly. Possibly by a revision of the drug laws, taking away one of the most profitable sources of income, power, and status that fuel criminal groups and networks. 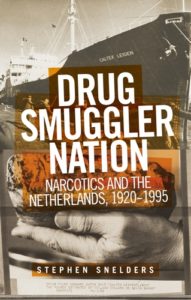 Stephen Snelders is a Research Fellow in the Freudenthal Institute at Utrecht University. Drug smuggler nation is available now.