This book grew from a personal quest to understand how the Vienna of 1900, capital of the Habsburg Empire, a place of culture and cosmopolitanism was, belatedly, fully and finally extinguished in 1938, when Nazi Germany annexed Austria, and Adolf Hitler addressed cheering crowds from the Vienna Rathaus (City Hall). These celebrations, marking the wiping of Austria from the map of Europe, and its recasting as a province of an enlarged Germany, occurred against a backdrop of beatings and humiliation of Jews and others who were considered not to belong in Hitler’s Germany. Antisemitism had existed in Vienna for some time, but I wanted to ask who had shaped and spread it. In asking these questions, I was not being naïve. I loved the culture of Vienna 1900, but I knew that it was far from free of prejudice. But Vienna 1938 was a long way from Vienna 1900.

My reading of many histories directed me to look back into the later decades of the nineteenth century, when politically organised antisemites began to come together in Vienna. Authors agreed that antisemitism’s main manifestation, particularly in certain parts of bourgeois Vienna, was a Christian Social movement, both in its political party and the myriad social organisations that surrounded it. Other antisemitic groups existed in Vienna, but the Christian Socials were by far the biggest. However, large political and social movements in the city were not all antisemitic, and the Christian Socials were nowhere near a majority in Vienna. Nevertheless, they were influential, and they spread out from Vienna to take political power at the national level in Austria. The movement was openly antisemitic, and placed a so-called ‘need’ for ‘antisemitic action,’ political campaigning, at the heart of myths it developed to ‘justify’ its existence.

The Christian Socials have been described as a coalition that emerged as a reaction to changes that reached Austria in the 1860s. These changes were attempts by the Habsburg dynasty to modernise their state, which had recently been defeated in war, and which was losing ground against international rivals. The Habsburgs turned to liberalism, an ideology enjoying success in other parts of Europe. So, they deregulated economic activity at the expense of traditional guilds, in order to generate income for military and other expenditure. Access to large-scale capital allowed factories and mass production to develop. At the same time, liberal constitutions were implemented. Liberal politicians took positions of prominence in national and local government; and the Catholic Church lost its dominance over education, marriage and the rules of social order, even if it retained considerable influence.

The antisemitic coalition has been drawn as an alliance of those who resented such changes. Part of this coalition came from the lower bourgeoisie, made up of small business owners and white collar employees. The former feared the ‘new’ capitalism that threatened their relatively inefficient enterprises, squeezing their profits. The latter saw their often fixed incomes devalued by the inflation that comes with growing economies. Another element in the coalition was the Viennese lower clergy, who despised the secularisation of Austria, especially the revoking of agreements that had given the Church social privileges. The alliance pointed to a few Jews among the ranks of the liberals, and succeeded, against all rationality, in portraying liberals and liberalism as ‘Jewish.’ They pointed to rich Jews in Vienna as exploiters, and pilloried as parasites the far more numerous poor Jews who migrated the city. They ignored rich gentiles, and labelled capitalism as ‘Jewish’ capitalism. Luck was on the side of this coalition. The lower bourgeoisie was being given the vote in newly expanded franchises from the 1880s onwards, which enabled a movement that tapped into their latent disaffection, via antisemitism, to garner lower bourgeois support at elections. Christian Socials also appealed for support in Vienna by displaying other aspects of their identity. They trumpeted their own interpretation of Christianity and Catholicism, and priests were leading political campaigners. Christian Socials were overwhelmingly German speakers, and pointed to their German heritage. They promoted ‘traditional’ views on gender-based hierarchies. These aspects helped the coalition to grow in strength and attain political power in late-Habsburg Vienna, replacing liberals on the Vienna City Council.

As with any research project, my investigations produced evidence that engaged with various aspects of previous writings on the Christian Socials. First, they confirmed existing narratives that showed a coalition of the lower bourgeoisie and the lower clergy that turned on liberal Vienna. Secondly, new evidence added to the history of the Christian Social movement, concerning, for instance, how it was dragged into nationalist disputes in the city, and how it used a so-called social mission as a cover for antisemitic activity. And third, new sources, and sources that go back further than those that have previously been used, gave revised insights into how the senior clergy in Vienna should be viewed in the development of the Christian Socials in their early days. These sources ran counter to how the senior clergy have been portrayed in previous histories, and indicate that, to date, their role has been downplayed or even ignored.

It has been argued that early Christian Social activists ran into much opposition. Certainly, a mission to Rome from the Austrian Imperial administration, which aimed at a papal condemnation of the incipient Christian Social movement, was well intended, as the Emperor had a great distaste for antisemitism and antisemites. But the case that the senior hierarchy of the Catholic Church in Vienna, who also sent a mission to Rome, opposed the Christian Socials in their early days is much less clear-cut. And the positions of the senior hierarchy towards the clerical and lay elements of the movement need separate assessments.

Public arguments occurred between senior figures in the Viennese Church and lay antisemitic activists, but these seem to have been no different to how people coming together for the first time, in any activity, run into conflict even if they are pushing in the same direction. Disputes were over who was to be in control, not the aims of the movement. This interpretation is supported by recognising how reconciliations were reached quickly, and contributions from the Archbishop of Vienna were made, publicly, to Christian Social funds.
The lower clergy have been depicted as being rebellious twice over. First, they are said to have endured persecution and ridicule from liberal Austria and its press. A very different picture emerges here. Among other complaints, priests certainly justified their activism as a defence against attacks from liberals but, on the contrary, in the 1860s and 1870s instances came to light where priests were honoured by the press, especially for their charitable work. Secondly, priests have been described as isolated individuals, with few or no resources, who were opposed in their political mission by their own senior clergy, even barred from political activity. But my research turned up instances where, from the earliest days, the lower clergy had links with aristocrats and were feted at talks they gave. One priest, who has been described as suffering all the disadvantages mentioned above, turned out to have been sent by his bishop to study for a doctorate. He then edited local and regional newspapers and published other political works. He has been identified as being banned from politics by another bishop, but he campaigned widely, sat on city and regional councils and he made it known that he had not been banned from politics, but ‘advised’ to focus on specific political spheres, leaving parliament to the bishops. No evidence emerged that any activist priest was ever disciplined for involvement with the Christian Socials. Rather, activist priests were given honours, publicly lauded, and promoted to attractive parishes, with sponsors and additional income beyond their salaries. They were given resources such as extremely large churches as spaces to spread propaganda.

Showing the lower clergy as wayward extremists, acting against their superiors, takes focus from the role of the senior clergy in making antisemitism acceptable, when the senior clergy were no less culpable. They disciplined priests for mismanaging parishes, but not for being Christian Social activists. Senior clergy let the activities of the lower clergy flourish, never ceased to show their commitment to this activist lower clergy, and the association of the senior clergy with Christian Socials gave the movement, and antisemitism, respectability and credibility. This stance did not lead directly to acceptance of Hitler and his message of 1938, but it contributed significantly to the final extinction of old Vienna.

This project grew out of research I undertook at King’s College, London, where I received immense advice and encouragement. This continued at MUP, where Emma Brennan helped me shape my materials into book form. Alun Richards at MUP guided me through the proposal and editing process, arranging excellent peer reviews. This book demonstrates that any project of this scope relies on many people, and it would not have happened without the librarians, archivists, colleagues and family who have offered me considerable help. 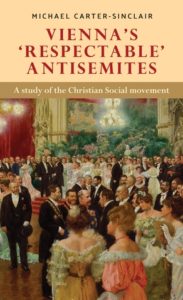 Vienna’s ‘respectable’ antisemites is available now. Michael Carter-Sinclair is a Visiting Research Fellow in the Department of History at King’s College London.