Bot loke heron & þenk on me;

‘You keep this one and I the other, for the love of God, Heaven’s king; don’t ever let this cup go, but look at it and think about me: it tokens our parting.’

This moment of gift-giving in the English romance Amis and Amiloun helps to explain what I wanted to do by researching and writing The gift of narrative in medieval England. In a fateful moment from the late-medieval poem, one young man, Amiloun, produces two gold cups, and hands one to his sworn brother Amis. Many extraordinary events will unfold in this dramatic narrative – Amiloun will perjure himself to save Amis’s life and reputation, and later become a leper as punishment; Amis will prosper but will eventually murder his children to bathe Amiloun’s sick body in their blood (spoiler alert: it all comes right in the end). And throughout the story, the two cups also accompany the protagonists. They’re both a physical token of the men’s relationship, and symbolize its quality and generative power: stretched far apart at times, but eventually returning and making good on the promises that they’ve exchanged. The cups also prompt memory and reflection (‘loke heron’), and they have their own trajectory through the narrative, along with wider associations that they might spark for medieval and modern readers of the romance. Amiloun’s words speak out to us too, asking us to look and think, to ponder the meaning of the cups and of the story.

These are just some of the ways that gift-giving and exchange are important to medieval narrative texts, especially the baggy genre that we call romance. I wanted to explore why moments like this matter, and how people, things and stories can all become involved in relationships of gift and exchange. Each chapter of the book takes a different text or group of texts, and thinks through their relationships of give and take using a slightly different lens, including those of anthropology and theories of the gift; material culture and the itineraries of objects; the exchange of words, especially promises as a sort of exchange; and medieval books themselves, which were often designed as valuable gift objects. It’s a particular pleasure to discuss a magnificent manuscript in the John Rylands Library in Manchester in the final chapter: a copy of John Lydgate’s Troy Book which also provides the book’s cover illustration.

For example, Chapter 3 discusses the exchange of prisoners and of women in Geoffrey Chaucer’s The Knight’s Tale and Troilus and Criseyde. I found a way into this through a conversation long ago at Girton College, Cambridge, where I used to teach. The then head of the college, Marilyn Strathern, is one of the most influential anthropologists of our time, whose work, including The Gender of the Gift (1988), is a rich resource for thinking about exchange, gender, agency and social relations. Marilyn patiently answered my naïve questions, lent me some books, and opened up a much larger space for me to think about these issues. Chaucer, who himself was taken captive on campaign during the Hundred Years War, sets these two poems amidst cycles of revenge that are the obverse of the generous gift. The young women and men in the stories are sometimes objects of exchange, sometimes entering into gift relationships themselves. Their actions are bounded by larger forces (the gods; fortune; gendered expectations; fear, desire or despair), but it’s often at moments when they seem most tied into those relationships and forces that their agency most comes into focus. Taking up Marilyn’s discussion of ‘partible’ persons from her study of Melanesian cultures, I read the identities Chaucer shapes as not singular, but always relational; in effect, they are multidentities. In this way, Chaucer and other medieval writers use narratives of the past, or of other peoples, as a form of speculative anthropology: assessing human interaction and reflecting on their own culture through the stories that they imagined different societies to tell about themselves.

In other parts of the book I read texts in French and English from the twelfth to the fifteenth centuries, and use different approaches to the gift, but one idea that returns in varying guises is that storytelling itself is a form of gift-giving, which opens up its audiences to an expanded circle of relations, and places obligations on listeners to respond. This can be a benefit or a burden, just as gifts can be a blessing or a curse.

Talking of blessings, it’s been a pleasure to work with the team at Manchester University Press, who have been very supportive and efficient right the way through from my initial proposal to the final stages of production. I’m delighted to join a great list of books on medieval topics, including Nicola McDonald’s seminal essay collection on romance, Pulp fictions of medieval England; books that imaginatively combine theories of materiality and literature, such as James Paz’s Nonhuman voices in Anglo-Saxon literature and material culture; and books by my colleagues at Oxford, in Helen Barr’s Transporting Chaucer, and Laura Varnam’s The church as sacred space in Middle English literature and culture. 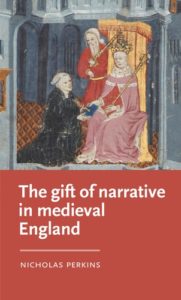 The gift of narrative in medieval England is available now. Nicholas Perkins is Associate Professor of Medieval English at the University of Oxford, and a Fellow of St Hugh’s College, Oxford. In the latter stages, research on this book was generously funded by the Leverhulme Trust.