As the UK went into the first lockdown last year, nothing seemed more important than fighting the pandemic. I was writing the first draft of The Futures of Feminism, and I found myself briefly wondering whether anyone would be interested in feminism any more. A moment later, I realised that such a thought meant that, even while I was writing about the ways in which female voices and experiences are marginalised, I was accepting the dominant, ‘male-stream’ view that feminism is a luxury concern that should be set aside at times of crisis.

As events unfolded, I realised that the COVID-19 crisis was likely to illustrate, rather than invalidate my book’s key argument: that if we are to change the society for the benefit of everyone, and not just a few women at the top, we need an inclusive form of socialist feminism that takes the most disadvantaged women as its starting-point.

Theresa May was the first UK Prime Minister to describe themself as a feminist. In 2019, all but one of the final six candidates (all men) to replace her as leader of the Conservative Party, including Boris Johnson, declared that they, too, were feminists. There seems no reason to take Johnson’s claim seriously, but May could point to her work to increase the number of female Conservative MPs, and her introduction of important legislation around domestic abuse, modern slavery and female genital mutilation.

However, this legal progress meant little in the context of the devastating impact of the austerity measures introduced by her party from 2010. This impact fell overwhelmingly on women, with the poorest and most marginalised suffering most. In relation to May’s feminist policies, funding cuts led many women’s refuges to close, while May’s ‘hostile environment’ policy for immigrants  meant that some women were reluctant to report abuse, slavery or FGM, for fear of being deported. I argue in my book that the underlying ideology of May’s Conservative Party meant that her kind of feminism is incapable of seeing, let alone tackling, the real, material problems that many women face.

The UK government’s response to the pandemic means that women are once again being disproportionately damaged – physically, economically, socially and psychologically – as policies have failed to take their needs and interests into account.

The government failed to anticipate that lockdown would lead to a rise in domestic violence (as had already happened in countries that locked down earlier) or to put adequate support measures in place when its attention was drawn to the problem. It failed to predict that gender patterns in employment and ongoing workplace discrimination would mean that women were more likely than men to lose their jobs. It seemed unaware that, in general, family responsibilities are not equally shared between the sexes and that it would, therefore, be even harder for women than men to do paid work from home, while also looking after and home-schooling their children.

The response did not consider how lone parents could possibly continue to go out to work when nurseries and schools were shut, often at short notice, and it refused to accept that childcare responsibilities gave parents a right to furlough. It failed to notice that progress towards gender equality has been set back a generation, or that while women are in poverty their children (our future citizens) are growing up in poverty. And although everyone suddenly realised the importance of nurses, care workers and hospital cleaners, the government seemed blind to the fact that ‘clapping for carers’ wouldn’t feed the carers’ children, many of whom were going hungry as their mothers (disproportionately immigrant workers) juggled several badly-paid, precarious jobs.

I believe that three feminist words can help explain these policy failures. They are patriarchy, intersectionality and care. These words (particularly the first two) may sound like feminist jargon, but they provide new ways of seeing the world. I argue in my book that they also point to socialist, rather than market-led, alternatives to current policies.

To use the word ‘patriarchy’ is to ‘join the dots’ between apparently separate areas of life. The word helps us see how inequalities or injustices in one area can reinforce those in another, and we can build up a picture of our society to see that men are generally privileged over women. In this picture, we can see that minor and major issues, ranging from the gender pay gap and the under-representation of women in parliament to sexual violence, media representations of women and men’s failure to do their share of housework are interconnected and mutually reinforcing.

We can also see that the whole of our culture and what we are taught treats one half of the population as ‘normal’ and the other half as an optional extra (for example, we have ‘history’ and ‘women’s history’.) Seeing something is the first step towards challenging it, and the term ‘patriarchy’ provides a useful way of exposing privileges and hierarchies that previously seemed natural. One practical result of living in a patriarchal society is not simply that the majority of policy-makers are men, but that they fail to consider the impact of their policies on people who are not ‘like them’.

Of course, many men are also suffering under lockdown. I argue throughout my book that our society is not just patriarchal, it is also a white-dominated, post-colonial, capitalist, class-based society (while these terms too can sound like jargon, they provide a useful shorthand for complex ideas that I explain in the book). Although the term ‘patriarchy’ can help us understand part of what is going on, it is also important to note that it began as a white feminist concept; I argue that it should always be used in conjunction with the more recent black feminist concept of ‘intersectionality’.

An intersectional feminist approach rejects the kind of one-dimensional thinking that looks at gender in isolation. Instead, it looks at the complex interactions between race, gender, class and other forms of inequality. It shows that women can be both united and divided by their experiences, that the meaning of ‘being a woman’ is highly variable, and that women will sometimes have more in common with men of the same class or race than with other women. It disrupts the cosy assumptions of some white feminists that they can speak for the whole of their sex while also criticising anti-racists who focus on black men. And an intersectional approach insists that because black women are oppressed by both their race and their sex, they have a distinct perspective that needs to be central to feminist theory and practice.

I have always argued that, if we are to understand the disadvantages faced by many women, we must also understand the capitalist class system, with its remorseless drive to maximise profits rather than to meet human needs. Like an increasing number of feminists today, I also argue that paid and unpaid care is not just something that some people (mostly women) provide when they look after members of their own family or work as paid care providers. Rather, it should be seen as a form of work that is the foundation of any society and an essential part of the economy. However, it is invisible to most non-feminist economists and politicians, and women’s paid and unpaid caring work is often a source of poverty and lack of status, with the most marginalised women the most exploited. Although the importance of care work became more evident during the pandemic, it was already in crisis, with many care homes and child-care providers going out of business and many people (mainly women) struggling to combine their paid work with their family responsibilities.

There is much talk of ‘building back better’ after the pandemic. From the inclusive, socialist feminist perspective that I advocate in my book, it is essential that when we talk about economic recovery and growth, this should no longer be growth for its own sake, or growth that harms the environment, but growth that values human beings and rewards qualities and activities that have traditionally been associated with women.

I therefore support feminist calls for a ‘care-led recovery’. As feminist organisations such as the Women’s Budget Group have shown, paid care work is already a major source of employment: for example, childcare is a much bigger employer than the aerospace industry; unlike aerospace, it is also environmentally friendly. More care workers are needed, and  state investment in the sector could provide nearly three times as many jobs as investing in construction; if care workers were properly trained and paid, it could be an attractive career option for men as well as women.

At the same time, the state needs to recognise that people who are deemed ‘economically inactive’ because they are not in paid employment are often working hard at home, raising families or caring for adults who need support. Such work should be economically rewarded; here a first step might be to raise levels of child benefit and carer’s allowance. We also need radical changes in the organisation of paid work, recognising that ‘normal’ workers have a life and responsibilities outside of their employment, and that apparently independent, care-free men are often free-riding on the unpaid or badly paid work of others. These changes should include much more flexible ways of working, such as shorter working hours, and more generous family and parental leave for men as well as women.

All of this could be part of establishing a ‘new normal’, in which women’s traditional roles and contributions are properly valued –not in some sentimental way, but in real terms; they might also be shared more equitably with men. This would be good for society and the planet, and help transform the vicious circle of female disadvantage into a virtuous circle of progress that is in the interest of everyone.

However, free market economies are driven by the pursuit of short-term profit, and they cannot provide the kind of changes we need. State support and action are therefore required, but dominant economic thinking opposes state intervention and spending. Nevertheless, there has been some limited support for change in some unexpected quarters: for example, David Cameron argued that more ‘family friendly’ employment and state help with childcare costs would benefit the economy, while Ivanka Trump (who describes herself as a feminist) persuaded her father to support some limited proposals around paid parental leave and financial support for family care givers.

In both cases, any gains have been wiped out by spending cuts and, in grossly unequal societies in which most people can only be losers, they do little to help the most disadvantaged women. Nevertheless, they suggest that expectations are changing and that feminist ideas that used to be seen as dangerously radical and socialist are becoming much more mainstream.

As I say in my concluding chapter, feminists certainly do not rule the world. However, feminists are increasingly active throughout society, and feminism is becoming a powerful political force, one that is increasingly difficult for political and economic leaders to ignore. I also argue throughout the book that feminist aims should be broad and inclusive, and that they need to go far beyond the pursuit of equality on terms that the most privileged men have already set. 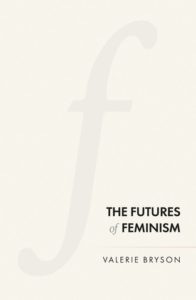 The futures of feminism is available now. Valerie Bryson is Emerita Professor of Politics at the University of Huddersfield. Her other books include Feminist Debates (1999), Feminist Political Theory: An Introduction (2003) and Gender and the Politics of Time (2007).