Why would I write a book on the history of religions in 2021? In today’s world, don’t we (at least in “western” urban settings) live in societies where religion has become less significant? Is there anything left to say that will surprise us, about what lies behind centuries and millennia of beliefs and institutions? In my book, Creating God, I use a strictly secular standpoint to consider how, where, when and even why major religions began and spread.

Pretty much everyone in the world thinks that the majority of people are misguided and deluded in their religious beliefs and affiliations. Individuals just make exceptions for the people with whom they share a religious identity, convinced it is the others who are deluded, and thinking perhaps “I have knowledge and certainty in my faith, you have beliefs, they have superstitions, the past has mythologies.”

My non-religious, secular approach just extends that further. In religious traditions, humans were created by a god; in a rationalist tradition religion is a human activity – in the phrase suggested by my publishers for my new book, a process of “Creating God” to suit a particular society, time and place. I approach religion as a social phenomenon – the beginnings, early growth and full establishment of a religion form part of the history of humanity, as does the vastly larger number of prophetic and religious movements that spring up, find some momentum, but then fail to achieve any lasting following.

My account of individual religions’ origins aims to understand the background to some of those that lasted. Both history and scientific archaeology can tell us more about the places and times of such distant events – what else was going on, and why did these religions last, when others didn’t? I chose to look at major religions whose histories are linked together, all of which we can describe as part of a monotheistic tradition, where followers worship one supreme deity.

This secular approach could also be described as materialist. It strips out the tales of the supernatural, on the grounds that the world does not operate like that. So there are no angels revealing golden plates, no night flights on a winged creature, no virgin births and bodily resurrections, no parting of seas or ascending in whirlwinds. The world of the past operated like the world of the present.

Some might say that taking a dogmatically non-religious approach to these subjects is as narrow as those who take a “fundamentalist” approach to their own religious faith. That is probably, and deliberately, true. If I had to choose a religion I think I would go by culture rather than theology, choosing Judaism for its brilliant literature, Christianity for its social ethics, Islam for its art and architecture, but above all modern humanism for its commitment to rationality. Perhaps I would add the persistence of Zoroastrians and the enthusiasm of the Mormons.

Is a non-religious approach therefore anti-religious? I accept that people who adhere to one of the religions I discuss in my book may disagree with my account, even if they accept the approach to the other religious movements discussed. I am happy to concede that religious beliefs, of past or present, can bring consolation in times of grief, and an opportunity for prayer to escape a problem (even through an all-powerful deity did not suppress the issue in the first place). An over-quoted phrase in context was “Religion is the sigh of the oppressed creature, the heart of a heartless world, and the soul of soulless conditions. It is the opium of the people”. Opium in the form of palliative care morphine can be helpful; dismissing social, political and personal problems with a shrug and “it is the will of God” may be less so. Like Alain de Botton in his book Religion for Atheists, I envy those whose religious affiliation automatically gives them a community to join when they move home.

And the established organisations of religion? Throughout history people have looked to their religious leaders, and the religious leaders looked to (or sometimes were) the state, as the state pursued its goals. We only possess an identity when we contrast it with others, and conflict thrives on how we identify. We need not look far back in world history to see conflict of Buddhists against Muslims, Muslims against Christians, Christians against Jews; clashes between Shia and Sunni, Protestant and Catholic; and so on. The writing of history is not there to judge; it is there to reveal.

In my book I decided to take two approaches which might look a little unusual. The lesser one is in the names I use. We are dealing with figures as they were in the past rather than the customary terms of religious faith and familiar translations. So Yahweh rather than “God” or the Bible’s “The Lord”, Yeshua rather than Jesus Christ, Paulos rather than Saint Paul, Muhammad ibn ‘Abdullah rather than the Prophet Muhammad (pbuh).

My other approach may need more explanation: in the book, I work back through time, not forward from beginnings, to help us understand how movements, prophets and their followings develop. If we began with the Elijah or Elisha of the biblical Book of Kings we would be in a world that seems mystical and to us incomprehensible. Let us start with the recent and track back in time.

I could have started the book with one of the many New Religious Movements of the late 20th and early 21st century (a count at the turn of this century identified 2000 in the US alone). But by choosing to begin with the emergence of the Mormons in the United States of the 1830s we are in a relatively modern world where the historical documentation is readily available and the human and social behaviour more familiar than societies of the deep past. Theirs was also a time and place with many prophets and preachers competing in the marketplace of religious ideas – a situation which has some echoes of the times in which Christianity and Islam emerged.

Mormonism had an angel, a new religious text, a prophet to present a new message and organise a movement. Islam had all those too, as well as an army which grew in sufficient power to conquer the territories of great powers in the Middle East in a matter of decades. Christianity had its prophet and oral testimony which in due course became written words, but its slower spread was achieved through the work of many, like Paulos (Saint Paul) who developed their own theology based on their own interpretation of the founding prophet’s role.

There are later key moments in the development of Judaism, but with reasonable confidence we can trace strictly monotheistic beliefs and the compilation of most of the Old Testament (Tanakh) to the Jerusalem of the 6th to 4th centuries BCE. It was a small town in a marginal province of the Persian Empire, whose Achaemenid rulers worshipped Ahura Mazda, the deity of Zoroastrianism. The religious beliefs of Judaism would, of course, influence Christianity, Islam and Mormonism. Questions remain around whether some ideas that developed in Judaism were influenced indirectly by the Zoroastrian faith, which traces its origins back to Central Asia but with widely disputed dates.

In my earlier books Inventing Africa and Antiquity Imagined I surveyed a number of invented, imagined or exaggerated pasts that served political religious or personal agendas. My new book Creating God reflects this broader interest in the authenticity of traditions. I have a (now sometimes unfashionable) enthusiasm for “truth” in the sense of testable hypotheses which stand up as the best fit with available data, and mistrust of assertions that lack evidence. Of course not all is known – if it were, historians and archaeologists could stop researching and just teach what was certain, like medieval churchmen. In disputed areas, I outline in my book what seems to me most convincing, assuming we know nothing until we have reason to believe something.

Researching and writing this book brought me to a broad range of fascinating debates and topics, changing many of my presuppositions and revealing new areas of study. Readers of Creating God will find plenty to interest them and no doubt things to disagree with. I hope it stimulates them to further discussions. 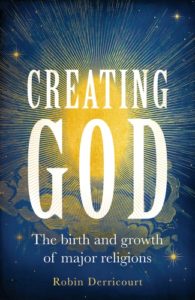 Creating God: The birth and growth of major religions publishes in May 2021 and is available to pre-order now.

Robin Derricourt is an Honorary Professor of History in the School of Humanities at the University of New South Wales and a Fellow of the Australian Academy of the Humanities. He holds a PhD in archaeology from the University of Cambridge. His previous books include Inventing Africa: History, Archaeology and Ideas (2011), Antiquity Imagined: The Remarkable Legacy of Egypt and the Ancient Near East (2015) and Unearthing Childhood: Young Lives in Prehistory (2018), which received the PROSE Award for Archaeology and Ancient History.