Christianity was a religion that had its cultural origins in the Eastern Mediterranean.  Its material basis reflected the ecology of that region, and when it spread westwards its institutions developed through the agency of the Roman Empire.  Yet when the religion moved beyond that Empire in space and time, it encountered a very different set of ecologies and social organizations.  Few concessions were made to these new conditions.    In this book I take one aspect of that uncompromising stance and follow through on the social and economic consequences of trying to stick to practices developed in the very different world of the ancient Mediterranean.  What I do, in effect, is track the interplay of belief and materiality across the whole Middle Ages in Western Europe.   My particular focus is on the demand that a light be kept burning on the church altar at all times.  This came from the ancient Mosaic injunction to keep a lamp of the purest olive oil burning before the tabernacle.  In the Roman world, it was not hard to keep such a light burning:  olive oil was plentiful and cheap.  But then the oil dried up and became very scarce in Northern Europe.   I look at how the belief that such lights should be burned was established in the early Church; at how rulers helped to enforce the practice; and at how having control over scarce supplies of oil buttressed their power and authority.

In the course of the Early Middle Ages, wax began to be substituted for oil for the lights.  Rulers, both lay and ecclesiastical, pushed hard to make sure that all churches had the material required.  But wax was expensive, if not scarce, and we begin to see the wider social and economic ramifications of burning lights as peasants were organized to provide the wax for them.  Indeed, a whole class of wax-paying peasants (known as cerocensuales)  can be detected in some parts of Europe.  I spend some time over the question of whether providing for the lights was actually a determining factor in the way in which society was organized.  In some areas of Germany it may have been, but not in general across Europe.  Here I have to examine the evidence in relation to rather different national historical traditions, for each region has its own account of how society developed: for instance in relation to the state (England) through ‘feudalism’ (France), or in the wake of urban development (Germany).   One advantage of studying a phenomenon like this is that it  serves to mediate between the different national traditions and gives us a new way into thinking about development across Europe as a whole rather than according to what allegedly happened in discrete regions.

By the Central Middle Ages, the insistence that people provide for the lights had paid off in the sense that more and more people did so of their own accord and began to organize themselves in associations (guilds) for this purpose.  The belief was that to burn the light established a link to heaven, and aided the salvation of the provider.  One can see why burning a flame seemed to convert the material into the eternal, although there was actually no theological basis for this.  What gave a massive boost to the lights was the development of the concept of Purgatory, the belief that after death people would spend a certain (and painful) time being purged of their sins in order to enter heaven.  In the later Middle Ages it was believed that you could buy time off Purgatory, and providing for the lights was one visible and even sociable way of doing so.  By the fifteenth century, so much wax was being burned for this purpose that supplies ran out in Western Europe and wax had to be imported from the Baltic regions.  At this point I was able to show in some detail the massive economic and social effects of burning the lights .  Nearly every parish by now had a guild organization.  But then  came a shift in belief, the ‘Reformation’, which meant that in many regions people began question the very existence of Purgatory.  It had no theological justification, and paying to get out by burning the lights (a practice, remember, which also had no firm justification), was a waste of  money and effort.  In some areas of Europe people went further and smashed lamps as evil.  So the work is bookended by two instances in which belief determined practice, first starting it, and second, suddenly ending it.  In between we have the unfolding of medieval society, to which the study of the lights provides a kind of guide or vade mecum.  Burning the lights may not have not have determined the form of society, but the history of the practice certainly reflected the ways in which it developed. 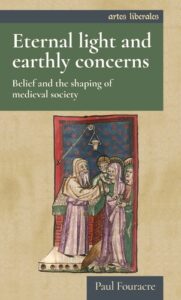 Eternal light and earthly concerns is available to buy now! Paul Fouracre is Professor Emeritus of Medieval History at the University of Manchester.