This book originated many years ago, in 2008, when my supervisor suggested I could look at photographs for my study on First World War experiences in France. At the time I knew nothing about photography, as my undergraduate degree was in continental philosophy and I specialised in the history and philosophy of science. I was spending the year in Paris so I made an appointment at the archive now known as La Contemporaine and I fell in love. Encountering photographic prints and albums for the first time was like nothing I had experienced in my academic life before. I particularly liked the personal albums, like the collection of 6 thematic albums made by a veteran of the engineering corps.[1] The official photographs made by the military photographic service Section photographique de l’armee (SPA), created in May 1915, were equally interesting. One of the things I remember more clearly about that period was the feeling that the photographs in the archive always disrupted my own assumptions. I thought, for instance, that personal photographs would tell more than official sources because they were not censored, which proved an incorrect, or at least, an inaccurate assumption. I also thought that personal albums would tell me more about war experiences than official photographs, which I linked to propaganda rather than experiences. That assumption was wrong too.

I argue that doing photography helped combatants and civilians to turn the raw flow of events into a war experience through five sets of practices: recording, feeling, embodying, placing and making visible and invisible. These five categories correspond to the five chapters of the book and they all describe ordinary functions of photography that had particular meanings during the war.

One of photography’s first uses was to record the outside world. Photographs have often been considered as visual documents that help to keep a record, becoming historical evidence. In 1915, France created a military photographic unit, the SPA, to photograph everything that had to do with the war in order to create the visual archive of the war. This archive had a totalising ambition which mirrored the SPA’s desire to control the creation and distribution of photographs, as well as the narratives photography produced (even if this pursuit of control ultimately failed). Similarly, amateur photographers brough their own cameras to the front lines to keep a record of what they had done during the war, the places they had visited and the people they had met and lost.

Photography is also about feeling. We cherish photographs of the people we love and get enraged by photographs of injustice. During the war, photography became an emotional practice: a way in which feelings were enacted and embodied. For instance, the photograph on the cover of the book, which shows a combatant holding two men plus another appearing from behind, belongs to an amateur album, where there are other pictures of fellow combatants and moments of joy.[3] The way in which the photograph is staged (in the middle of nowhere, which a chair that has been placed there on purpose) and the amused expressions of the men involved suggests the joke was not just that one of them was strong enough to hold two men, but also that they had posed like this for the camera. Taking a picture was a way to bond. Similarly, the veteran of the engineering corps I mentioned earlier dedicated a whole album to the memory of Lt Georges, who had died in Verdun. He collected photographs portraying moments they spent together during the war, remembering their favourite activities like fishing, as well as images from the hospital in which he died. Photography mediated the way he processed grief.

Photography also became a technology of embodiment – a technology that not only provided representations of bodies but also facilitated certain bodily encounters. The clearest example is the photography of the dead. As we might expect, the photography of the German dead was very different from the photography of the French dead. German bodies were portrayed as victims of violence, always maimed, half buried or abandoned on the ground. Few SPA photographers took images of French victims, but these photographs became an essential element in the war archive. These images gave a material and visual body to the notion ‘Mort pour la France’, a legal status for the war dead that guaranteed rights to relatives such as pensions for widows and orphans. Amateur photographers also articulated their relationship to the dead differently in the case of German or French bodies. For instance, an amateur photographer took a close up of a German body after photographing the attack that had killed him, giving a visual narrative to the duty to kill, while he photographed French bodies at distance, ready for burial.

Photography also helped to place oneself in the environment. Years of fighting on the Western front profoundly changed the French landscape. Photographs of ruined villages and broken trees presented viewers with images that mobilised a new geographical imaginary of France dominated by the destruction of its natural and man-made heritage. Beyond representations, practising photography also helped combatants to develop a new sense of place. Doing photography on the front lines or consuming images from the home front helped combatants and civilians to reconstruct their relationship to the environment through different visual and tactile engagements.

Finally, photography made some things visible while making others invisible. This might seem counterintuitive: photographs are mostly valued for their images, so it might seem that making visible was the primary function of photography. I argue the contrary. Photographic visibility mattered only because making visible involved a whole set of photographic practices: recording, feeling, embodying and placing. In contrast, making invisible meant the absence of those practices. Visibility, therefore, does not refer to what is seen, but to what is experienced. Photographic practices created what I call frames of experience. What photographs showed, as well as the relations into which photographers, photographed, and viewers entered through photography, delimited what could and could not be collectively acknowledged as war experiences. Recording, feeling, embodying, placing, and making visible and invisible, therefore, are not only the functions of photography, but also the ways in which combatants and civilians transformed the raw flow of what they lived into war experiences.

By publishing this book in a series on Cultural History of the Modern World, Picturing the Western Front contributes to a growing scholarship that defends the importance of photography, as a social and cultural practice, in war. By 1914, photography was widespread among French society thanks to cheap cameras available to the public, a strong national industry and an increasing number of illustrated publications. As this book demonstrates, both combatants and civilians used photographs and cameras to make sense of their war experiences. 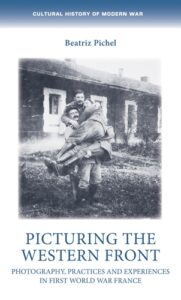