A ‘Kashmirologist’ by inclination, this is my third book about the disputed region of Jammu and Kashmir (J&K).1  A number of reasons stimulated me to write my book.  The first was a desire to keep the often overlooked people of J&K (‘J&K-ites’) and their experiences and political aspirations in the public eye.  I also wanted to clarify some catchy, but incorrect, Pakistani terminology about the India-Pakistan dispute over possession of J&K—the so-called ‘Kashmir dispute’.  Pakistanis claim that this dispute is ‘the unfinished business of Partition’.  Actually, it is the ‘unfinished business of the decolonisation of India’s princely states’.  J&K’s ruler, Maharaja Hari Singh, was the empowered decision maker to decide J&K’s international future, not the British (who certainly were responsible for partitioning British India).  And, while Singh ultimately acceded to India, he seemingly had favoured independence for J&K.  A further aim for me was to investigate the Kashmiri identity and why the Kashmir region has long ‘hogged the limelight’ locally and internationally.  Since its creation in 1846, the popular name for Jammu and Kashmir was always ‘Kashmir’, not ‘Jammu’, despite all J&K rulers coming from Jammu.  Similarly, it is the ‘Kashmir dispute’, not the ‘Jammu dispute’.  The Kashmiri identity is an old one, long predating the (post-British) Indian and Pakistani identities, a factor many Indians have unsuccessfully wrestled with.  A final reason was to better understand what the term azadi actually means for J&K-ites.  This imprecise term can mean independence, freedom, joining Pakistan, or even securing autonomy within India.  Increasingly, it generally means being free from India.

In brief, Independent Kashmir discusses the topic of an independent ‘Kashmir’, actual or envisaged, and why this aspiration remains incomplete.  I do so by focusing on two men and one insurgency.  The men are Maharaja Hari Singh, J&K’s last Maharaja, and Sheikh Mohammad Abdullah, J&K’s highest profile politician.  Both at times desired an independent J&K.  The insurgency I discuss is the anti-India uprising that Muslim Kashmiris instigated in 1988 in Indian-controlled Kashmir (i.e., the Kashmir Valley).  This violent insurgency still poses major security challenges for India.  By concentrating on these two men and their activities, and on this insurgency, I have provided a focused history of J&K.  My narrative begins around the mid-1920s, when Hari Singh became J&K’s autocratic ruler.  A taciturn figure, his vacillations in 1947 arguably instigated the dispute over J&K’s international status.  I then discuss Abdullah’s volatile political career from 1931 to 1982 and his vexed post-1947 relationship with New Delhi as he sought maximum autonomy for ‘Kashmir’.  After that, I discuss the Kashmiris’ anti-India uprising and end with some major changes that India imposed on Indian J&K in 2019.  Despite those impositions, disenchanted Muslim Kashmiris increasingly crave azadi from India.  As I explain, their aspiration is, and most probably will continue to be, incomplete.

While focusing on the issue of independence for ‘Kashmir’, I also discuss three other longstanding issues concerning J&K.  The first is the Kashmir dispute: the IndiaPakistan quarrel about which should possess J&K.  Pakistan has long wanted a United Nations plebiscite conducted so J&K-ites can decide whether J&K, in its entirety, stays with India or joins Pakistan.  Conversely, India, which claims all of J&K because of Hari Singh’s accession, has been disinterested in this poll since the mid-1950s.  Their dispute is intractable.  It is unlikely to be resolved while these combative neighbours exist in their present structures.  The second issue concerns J&K’s integration into India.  Depending on his audience, Sheikh Abdullah sought full autonomy within India, self-determination, or independence for ‘Kashmir’.  By ‘Kashmir’, he usually meant his beloved Kashmir Valley, not all of J&K.  (My book clarifies these terms.)  Nevertheless, to Muslim Kashmiris’ chagrin, India steadily integrated ‘their’ state (my ambiguity is deliberate) into the Union.  This occurred from 1953 following Abdullah’s controversial dismissal as Indian J&K’s prime minister.  Seemingly, it ended in 2019 when New Delhi unilaterally abrogated two constitutional provisions that applied to J&K, bifurcated the state into two Union territories (J&K; Ladakh), and imposed (further) draconian ‘security’ measures on Kashmiris.  The third issue involves disenchanted Muslim Kashmiris struggling to decide whether to remain with India, try to unify with Pakistan, or strive to become independent from both nations.  Most probably favour azadi (independence)—although I speculate, as J&K-ites have never actually been asked in any meaningful or inclusive way what option/s they want for their homelands.  Invariably, Kashmiris’ disunity makes it easier for India to ‘divide and rule’ Indian J&K.  Should Kashmiris ever become unified in their political aspirations, India may confront even more serious challenges in Kashmir.

I conclude by asserting that a reunified, independent J&K is unlikely to ever come into being, despite some J&K-ites’ aspirations.  The creation of an independent ‘Kashmir’ (i.e., the Kashmir Valley) might be more likely, but it’s a big ‘might’.  Nevertheless, the establishment of an independent ‘Kashmir’ could provide a ‘win-win’ solution by, paradoxically, creating a ‘lose-lose’ situation for both India and Pakistan: neither nation would control the desired Kashmir Valley.  Ironically, however, both India and Pakistan agree that neither J&K, nor any part of it, can ever become independent.  Despite this rare display of unity, an internationally independent J&K is not a new proposition.  Rather, it is a lapsed or superseded one.  When Maharaja Hari Singh finally acceded to India on 26 October 1947, J&K ostensibly had been independent for 72 days.  His accession should have ended the matter of J&K’s international status, but it didn’t.  Similarly, it should have killed the concept of an independent J&K, but it didn’t.  Hence my book. 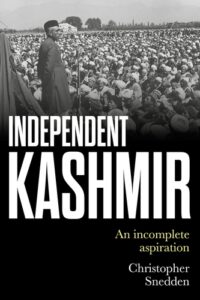