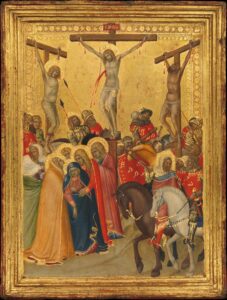 A typical later medieval image aiming to encourage affective piety in its viewers, filled with the emotional intensity of a suffering Christ and his swooning mother.

Something about “affective piety”—the highly-emotional devotion to the humanity of Christ and the Virgin Mary—has fascinated medievalists for decades.  The changing depiction of the crucified Christ from triumphant to suffering, or the extreme, wound- and blood-focused emotional practices of medieval mystics, are always popular paper topics for medieval history students, undergraduates and graduates alike. The International Medieval Bibliography lists hundreds of articles and books dealing with topics pertaining to “affective spirituality,” most of them claiming that such piety was a later medieval phenomenon, started by Anselm of Canterbury in the twelfth century, expanded by Cistercians, and then widely-popularized by Franciscans, lay people, and medieval women in the later Middle Ages. For generations, scholars like R.W. Southern and Caroline Walker Bynum have asserted that it was these later medieval people—mendicants, laity, women, mystics—who naturally gravitated towards a “more human” connection with their God, since they were themselves (as lay people, as women, as friars) more embodied and more “of” the secular world than the cloistered monks who came before them.  In this historiography, extra-institutional Christians, like Francis or mystical women, and disenfranchised Christians, like beguines or lay people, are put forward as the agents of change that moved medieval society out of its “darkness” and into the “dawn” of early modern individualism and eventual “Enlightenment.” And, in turn, earlier medieval Benedictine monks are cast as the antiquated, institutional yes-men who parroted the orthodoxy of the Church and used their religion to manipulate and conquer others and empower themselves.

But what happens to this narrative when we recognize that affective piety was already being embraced a century before Anselm, by those same eleventh-century monks previously seen as rigid religious automatons? What happens to our understanding of the development of medieval Christianity, with all of its post-twelfth-century “individualizing” affects and their “Renaissance” implications, when we learn that affective piety was actually alive and well in the cradle of orthodox, institutional Catholicism that was the eleventh-century, male, Benedictine community? And how does our understanding of what the experience of medieval monasticism was—in the period before Cistercian and mendicant transformations—change when the emotional authenticity and expressive “individualism” of affective piety is added to it?

My book, Emotional Monasticism: Affective Piety in the Eleventh-Century Monastery of John of Fécamp, out in paperback this June 2021, examines the role of affective devotion in the eleventh-century male monastic context through the lens of a Norman abbot John of Fécamp and the devotional culture of his monastery over the course of the eleventh century. On its most basic level, the book works to understand John of Fécamp’s devotional ideas, never before explored and expounded upon in English: the book examines John’s deeply influential but oft-forgotten treatise, the Confessio theologica, for the first time since its discovery in the early twentieth century, and it traces the reception of John’s ideas among his more famous peers (like Anselm of Canterbury and Bernard of Clairvaux), and his legacy around both the Anglo-Norman world and the wider Cluniac and Gorze reform networks of which he was a part.

But Emotional Monasticism is far more than simply a case study of a single Norman monastery. For historians of monasticism and Church history, it is the first study examining how eleventh-century monastic reformers, alongside regulating observance, customs, and liturgy, attempted to transform the inner, emotional lives of their brethren. As John Van Engen says in Speculum, it is “an ingenious effort to weave together matters of the heart and a reignited interior with the realities of monasteries in the fraught world of power and property in eleventh-century Normandy.”  The book gives voice to the affective devotional lives of traditional Benedictine monks, known more for their presumed adherence to “unfeeling,” blind, communal ritual than for their emphasis on an individual, affective relationship with God. But most importantly for historians of medieval Christianity and devotional practices, this book is a study of one of the earliest manifestations of affective piety, changing our understanding of the roots of later medieval spirituality, and making it what Scott Bruce (Fordham) calls “an important work of revisionist history that will undoubtedly have a profound influence on the study of Christian devotion in the Middle Ages.” And for historians of emotion, the book provides “a perfect example not only of why we should study the history of emotions, but also how we should write those histories” (EMMA). 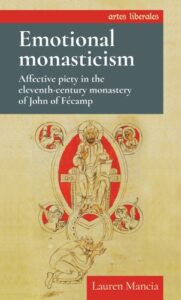