Andrew Michael Ramsay (1683 ⸺ 1743) was a freemason, Jacobite baronet, tutor to Bonnie Prince Charlie, philosopher, novelist, biographer and adventurer exiled from the Jacobite court for duelling, who James Stuart (the ‘Old Pretender’) believed to be “mad”. Born in Scotland, he became a naturalised Frenchman and came to know many leading (early) Enlightenment figures in Britain and France, such as David Hume, Jonathan Swift, Alexander Pope, Voltaire, Baron Montesquieu, and Cardinal Fleury.

This was a time of great uncertainty and the circulation of ideas, including upon the direction of monarchy in the two states. Amidst a context of European ‘absolute’ monarchy ⸺ in which the monarch reigned unencumbered by their (parliamentary) estates ⸺ Britain and France offered two different models. In 1715, France had just witnessed the end of Louis XIV’s 72-year reign; a reign that personified ‘absolute’ monarchy in the form of the “sun king” and his palace at Versailles. Conversely, Britain had eschewed the ‘absolute’ pretensions of King James II (Louis XIV’s cousin) in the Glorious Revolution (1688), which gave rise to constitutional monarchy to restrain the power of its monarchs. The early decades of the eighteenth century saw a debate upon ideas of monarchical reform in both Britain and France, as supporters of James II (the Jacobites) argued and fought for his return and then that of his son (the ‘Old Pretender’), and France grappled with the legacy of Louis XIV.

Ramsay is an important figure because he had a foot in both countries and acted as an intellectual conduit between them, inspiring several leading theorists on monarchical reform. While Ramsay is predominantly known today for helping to introduce freemasonry into France and his connection with the highly significant thinker Archbishop Fénelon, his political works provide a fascinating insight into theory shaped by both countries, seventeenth century thought and long-term Eurasian history. Ideas of monarchical reform explores the intellectual and historical contexts from 1660 to 1732 and a range of texts dating back to classical times to situate Ramsay’s solution to the problems of early eighteenth century monarchy. By discussing the events and works by other political philosophers, the monograph highlights the influences upon Ramsay’s unique system; one that drew on politics, political economy, theology, history, and mythology. His remedy to the ongoing problems faced by political unrest in Britain once George I had taken the throne (1714) and the Jacobite Rising had failed (1716): a country run by an ‘absolute’ monarch supported by a hereditary council of nobles, and the extirpation of the British Houses of Parliament.

Based on his research into British, European, and ancient history, Ramsay judged that the rise of popular government had been the cause of revolutions in the seventeenth century. The involvement of a democratic part in government (parliament), had removed the stability of ancient and natural government in the form of a king supported by a hereditary council. By eradicating Parliament and restoring the Stuarts to the throne, Britain could use its navy to dominate world trade turning London into ‘global hub’ and ‘Capital of the Universe’ unimpaired by its political tensions. Ramsay’s theory proposed an idiosyncratic answer to questions about internal strife within states, and the capacity to reinstate order so that a nation could focus on increased international commerce. This novel approach may appear far-fetched, but as the monograph demonstrates elements of his design were to inspire Montesquieu, Voltaire and the English Minister and philosopher, Viscount Bolingbroke.

Ideas of monarchical reform is the first biography on the Chevalier Ramsay in English for over sixty years and has been published by Manchester University Press in hardback and paperback. Its interventions include the situating of Ramsay within the intellectual context as a conduit between Britain and France in the early Enlightenment, as well as demonstrating his manipulation and impact on the long-term legacy of Fénelon when acting as editor of the archbishop’s papers after his death (1715). 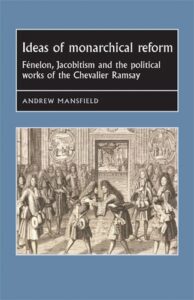 Ideas of monarchical reform is available now. Andrew Mansfield is a lecturer at Goldsmiths, University of London, and a member of the Sussex Centre for Intellectual History.