Stories from the frontline of the NHS 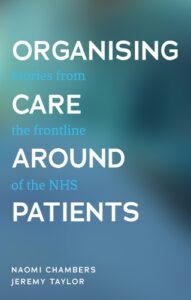 When Cathy gave birth to her baby son, almost everything that could go wrong, did. She contracted sepsis on the labour ward- and the nurses nearly failed to spot it.  Her request for an epidural was ignored, she needed an emergency Caesarean, the post-natal ward was a nightmare, her milk wouldn’t come through; and days after discharge she was readmitted with another bout of sepsis.  Yet, overall, Cathy feels she received excellent care.

Tim has lived with epilepsy since he was a child.  He describes it as a hidden disability which has had a massive and pervasive impact on his education, relationships and working life.  He has been on the receiving end of ignorance, fear and prejudice. At one point there was a worry that his girlfriend’s father believed him to be possessed by a demon. In his many dealings with the NHS he has encountered fantastically kind nurses, high-handed doctors, and a GP who is “more happy to give out some pills than she is to talk about it”.

Kauri’s father spent his final days dying at home after a diagnosis of pancreatic cancer.   Her main challenge as the prime carer was managing the competing demands of his large, extended family for access to him.  She describes a pivotal clinical intervention:

“So the GP comes downstairs and she has a very blunt conversation with some of the family who were there that basically goes along the lines of: these are the last days of his life, this is the time where his immediate family should be spending that valuable time with him. She talks about this Facetime request and says that’s utter nonsense. She says that immediate family are going to need a lot of support so the best thing you can do is support….. And actually it was very brave of her to do that, but also because she was the GP, she was independent, she was professional, that message carried authority.”

Cathy’s, Tim’s and Kauri’s stories are three of twenty-five accounts that we have brought together in our book Organising Care Around Patients. These are varied and sometimes very powerful stories of people’s experiences of receiving care from the NHS, from birth to death and all stages in between: the good, the bad and the ugly.

In our professional lives as, respectively, a healthcare management academic and a patient advocate, we have both been exercised by the question “why doesn’t patient-centred care happen?”  The Victorian physician Sir William Osler famously advised “Just listen to your patient, he is telling you the diagnosis.”  We both felt that lack of listening – and everything that should flow from it – is a persistent problem in the NHS.  In compiling this book, we wanted to model the behaviour that we would like to see in the health service.  And so we listened – we hope we really listened – to the fascinating and insightful accounts of our story-tellers.

This is not scientific data-gathering, it was a small sample of people, and there were all kinds of biases in how we found them. Like many other researchers we faced the paradox that those you most want to hear from are often the least likely to engage with you.

Nonetheless, there is a richness and nuance in these testimonies that cannot so easily be extracted from survey responses. They invite reflection on a number of important themes, such as:

Above all, these stories, taken together, illuminate five key ingredients of patient-centred care: the centrality of kindness, attentiveness, empowerment and professional competence, and of the need for a whole organisation to pull together to get it right, or what we have called organisational competence.

Listening underpins all of these – the will to get to the heart of what really matters to patients and their families.  Patient-centred care has been a long-standing goal of the NHS but one it has never fully reached.  As the nation tries to “build back better” after the ravages of Covid-19, and the NHS goes through yet another spurt of reorganisation wouldn’t it be wonderful if patient-centred care were accorded the priority it deserves?

No-one doubts that this will be a huge challenge in a service that is as complex, overstretched and Covid-battered as the NHS. But everyone has a role to play in this and we hope our book will help.  It invites you to put yourself in the patient’s shoes and to reflect on how you could make your own practice more patient-centred.  Whether you are a policymaker, clinician, manager or student – or indeed a patient or carer- we think these stories will have something to say to you.

By Naomi Chambers and Jeremy Taylor

Organising care around patients is Open Access, and can be accessed for free here.

Print copies are also available, and can be ordered here.

A selection of compelling oral testimonies detailing patient experiences are brought to life in a series of audio clips, available here.

To mark the launch of the book, Alastair McLellan, Editor of the Health Service Journal, will be joined by Professor Chambers and Jeremy Taylor for a live panel discussion asking how care can be better organised around the needs of patients. The event is on September 17th at 12.30pm and you can register here.