It used to seem simple. European integration was good for Ireland, and Ireland was a good European, that was the mainstream consensus. 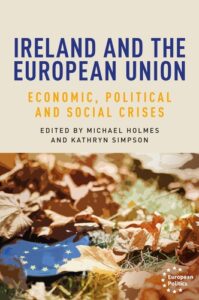 In the run-up to the 2009 European election, several European and Irish leaders described Ireland as being ‘at the heart of Europe’. However, that pro-European consensus was already under strain. Only in June 2008, Irish voters had rejected the Treaty of Lisbon in a referendum. The 2009 European Parliament election was something of a litmus test for the Irish-European relationship. And although no-one could have predicted it, it took place on the cusp of a dramatic transformation of Ireland’s and Europe’s circumstances.

The global financial crisis that erupted in 2008 had a specific impact on the eurozone countries. This was followed by a succession of foreign policy challenges in the near neighbourhood of the EU, stemming from the consequences of the Arab Spring uprisings in the Middle East and North Africa in the early 2010s and from the Ukrainian Revolution of 2014. The destabilisation triggered by the Arab Spring movements contributed strongly to the Mediterranean migration crisis from 2015. This in turn contributed to the rise of populist parties in many EU countries, which played into the Brexit referendum in the UK in 2016. And these inter-linked crises created an over-arching crisis of EU governance.

We examine how Ireland’s relationship with the EU was affected by the succession of crises – or perhaps relationships, since the book looks both at the Republic of Ireland and Northern Ireland. The various crises were not of equal significance on the island of Ireland. The financial crisis was a huge issue for the Republic but less so for Northern Ireland; Brexit had a major impact in both polities; the migration and populism issues were less controversial; and the foreign policy challenges had a minimal impact.

The key to this book is the ability to examine a wide range of themes in a comprehensive and cohesive manner from leading academics in the field. It begins by examining Irish foreign policy and the EU and discusses the security debates around the EU’s near neighbourhood and the EU’s changing security outlook, arguing that ‘hard choices are coming into view’ for Ireland. It also assesses the impact of Brexit on Ireland’s international stance, noting the former importance of the UK as a close partner for Ireland within the EU and analysing the subsequent attempts to shore up Ireland’s foreign policy.

This detailed economic theme is developed further by exploring the impact of debates about control of taxation policy on Irish-EU relationship. This is a debate which touches strongly on issues of economic nationalism, and again it particularly reflects Ireland’s reputation as the ‘state that is perhaps more closely allied than any other democracy with the interests of global transnational corporations’. The chapter includes consideration of the controversial Apple case which brought the Irish government into conflict with the European Commission.

The book then moves on to an area of social policy which has a major impact on both political and economic issues. An examination of migration policy, looking first at Ireland’s historical position as a country of emigration and then examining how the EU’s approach to issues of migration and asylum has developed. It then explores in detail the EU’s migration crisis and Ireland’s contribution to the response, noting that Ireland has tended to associate itself with the more progressive group of member states in the EU on this issue.

We then combine both political and social crises to examine Irish political parties and their policies on the EU. There has generally been a strong pro-EU consensus among Irish parties, but there is also a strand of Euroscepticism, particularly evident during European referendums. The financial crisis saw a strengthening of Eurosceptic stances, though noticeably on the left of the political spectrum and not on the right. However, the subsequent Brexit crisis actually led to a strengthening of the pro-EU consensus, albeit with a more critical and nationalist tone.

One of the interesting features of Irish politics during the financial crisis was the development of extra-parliamentary forms of action. Public protest movements, which included protests against water charges and other taxes, wider protests against austerity, and developed into protests on social issues such as marriage equality and abortion. While the protests undoubtedly helped create sharpened criticism of the EU, they also led to a more nuanced public understanding of the EU – critical of austerity but more appreciative of other social dimensions of the EU. In addition, the protests increasingly held domestic political elites to task for their actions at European level.

There has generally been a strong pro-EU consensus among Irish parties, but there is also a strand of Euroscepticism, particularly evident during European referendums.

This suggests an evolution in Irish public opinion about the EU. There is an apparent contradiction; that Ireland always registers among the most pro-EU countries in general opinion surveys, despite the fact that it has on several occasions voted against EU treaties. Tracking Irish public opinion during the financial crash and the Brexit crisis, there was no discernible Irexit effect. Although Irish public continues to show levels of knowledge of the EU that are lower than the EU average, their overall attitudes remain positive, and this was strengthened after Brexit.

One important factor in shaping public opinion is the media. An examination of whether the media could or should have a role in creating a European public sphere is explored. It analyses how the media in the Republic of Ireland reported the Brexit referendum and argues that their reporting was marked by a strongly Irish-focused perspective, and that a wider sense of Europe and Europeanness did not emerge.

We then turn to Brexit. The impact of Brexit on British-Irish relations, and particularly the border issue is considered. An evaluation of the Irish government’s dual strategy of building a domestic consensus and establishing support at the European level ensues. An assessment of the implications for Ireland’s EU membership beyond Brexit represents a huge challenge for the country, as it is losing a major trading partner and an ally on many issues in the EU, but also constitutes a decisive moment when Ireland committed itself to a European future.

The economic impact of Brexit on Ireland is then examined, noting that there are potentially three ‘economies’ to consider: Northern Ireland, the Republic, but also the Republic’s distinct multinational sector. An analysis of the potential economic shock of Brexit in terms of the overall sectoral impact, in terms of its impact on the labour market, and in terms of one specific policy area, the energy sector is considered. It concludes by highlighting the impact of Brexit on Irish economic diplomacy, which saw the country reach out to new economic partners and allies in the EU.

Following on from this an analysis of the specific constitutional issues that arise for Ireland and the UK after Brexit. Brexit created a crisis for the UK’s improvised constitution, to the extent even of casting doubt on the continuing integrity of the UK, with renewed calls for independence in Scotland and for Irish unity. This in turn created a significant constitutional challenge for Ireland. While Ireland did not create the crisis, it was faced with its consequences.

One of the most important of those was the potential impact of Brexit on the peace process in Ireland. Ana analysis of the EU’s contribution to the peace process, noting how joint membership of the EU helped create a framework of cooperation between the UK and Ireland is explored as well as how Brexit has disrupted three delicate balances on which the peace agreement was built: those between the communities in Northern Ireland, those with the Republic of Ireland, and those with the UK.

Brexit created a crisis for the UK’s improvised constitution, to the extent even of casting doubt on the continuing integrity of the UK, with renewed calls for independence in Scotland and for Irish unity.

To highlight the EU’s contribution to the peace process in Northern Ireland an examination in detail of The Interreg programme; special funding for cross-border regions within the EU, and forms part of the overall framework of funding for Ireland – north and south – which has supported the peace process is explored. While the programme has been very successful in and still offers considerable opportunities in the Irish context, the record to date shows only limited benefits, due mostly to the highly centralised nature of the UK and Irish states and to rivalry among agencies on both sides of the border.

So what will be the future relationship for Ireland and the EU? For a long time, Ireland was seen as a pro-European country, one that had benefitted from many EU policies and programmes. The analyses in this book suggest that there is now a more questioning dimension to the relationship, but at the same time the broad outlook remains pro-European. In particular, Brexit has served to underline Ireland’s commitment to, if not dependency on, the EU.

However, there are several potential problems which could disrupt that commitment. Brexit has changed relations between the Republic and Northern Ireland, and between Ireland and Britain, in ways that are still far from known. The EU is also still changing, with emerging calls for deeper integration. While Ireland is generally supportive of further integration, developments in areas such as defence cooperation and tax harmonisation would cause problems. Finally, the global situation is constantly evolving, and issues such as climate change, health security and de-globalisation could have a major impact on future Irish-EU relations.

Ireland and the European Union is available now in paperback, priced at £20.

Dr Michael Holmes is Associate Professor of Political at the European School of Political and Social Sciences at Universite Catholique Lille, France.

They are co-editors of the book Ireland and the European Union: Economic, Political and Social Crises published by Manchester University Press.