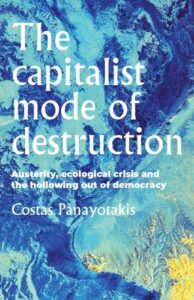 While I began writing The Capitalist Mode of Destruction before the current pandemic, I could not but be struck by all the different ways this pandemic encapsulated many of the book’s arguments and themes. As its title suggests, the book analyses how, over the course of its development, capitalism becomes an increasingly destructive force, whose benefits over time come to be eclipsed by the growing threats it generates for humanity and the planet. In dissecting capitalism’s ‘cost-benefit contradiction,’ the book places special emphasis on the destructive consequences of such familiar aspects of contemporary capitalist societies as economic austerity, ecological crisis and the hollowing out of political democracy.

Each of these destructive phenomena has fuelled the current pandemic. While mainstream accounts, especially the ones propagated in the financial press, portray the pandemic as an exogenous shock to the capitalist economic system, more critical treatments have shown the links between the accelerating emergence of new diseases (including HIV, Ebola, Covid-19, and dozens of others less notorious ones) and ecological degradation. As capitalist profit-seeking leads mining, logging and agribusiness corporations to push deeper into formerly untouched habitats where animals harbour viruses potentially harmful to humans, the likelihood of animal to human transmission increases dramatically. Meanwhile, the economic networks of neoliberal globalisation also increase the likelihood that localised outbreaks will turn into global pandemics, while the conditions under which livestock is raised for the global market are as conducive to increasing the virulence of any pathogens present in the industrially raised livestock as they are to maximising profit.

Under these conditions pandemics are neither ‘accidents’ nor ‘exogenous shocks’ to the capitalist system. They are its predictable products. In fact, experts have been warning about the advent of lethal pandemics, such as the current one, for years.  And yet once the inevitable occurred little more than a year ago, even the richest and most technologically advanced parts of the capitalist world were caught off guard, with the disastrous results that we are experiencing up to this day.

Experts have been warning about the advent of lethal pandemics, such as the current one, for years.

Here neoliberal austerity, since the global financial crisis of 2008 but even before, certainly played its part. Underfunded public health hospitals, in the global North and South alike, lacked the sufficient health care personnel and even the basic protective equipment to ensure that the preciously few doctors, nurses and supportive workers would not get sick and inadvertently transmit the disease to their patients and communities. Even private hospitals in countries like the United States had, before the pandemic, reduced their number of beds and ICU units to a minimum, so as to reduce costs and maximise profits, thus reducing their capacity to accommodate the surging demand in health-care services that a pandemic inevitably generates.

This pandemic was rendered even more lethal by a long brewing crisis of political democracy, most obviously manifested in the rise of far-right wing politicians from Donald Trump in the U.S to Boris Johnson in Britain and Jair Bolsonaro in Brazil. As if run of the mill neoliberal capitalism did not provide fertile enough ground for the spread of pandemic disease, such figures stood out as textbook examples of the kind of public health messaging that a political leader should avoid when confronted with pandemics. Meanwhile, the pandemic has fueled the crisis of democracy even further, with governments around the world using the need to social distance as an opportunity to clamp down on social protest and basic political rights as well as to use the difficulty of popular mobilisation in such an environment as an opportunity to push legislation harmful to workers, women, and the environment.

In this background of misery, caused not just by disease and death but also by economic crisis, unemployment and hunger, even the one ray of hope, represented by the invention of a number of promising vaccines, illustrates the ambiguity of any of the benefits that capitalism can still generate.  While these vaccines may represent a triumph of science, the way the vaccinations are proceeding are showing the singular failure of the capitalist system to effectively harness scientific achievement to the greater good. A nationalist war over vaccine distribution is raging between the affluent countries of the global North, even as low-income countries will likely have to wait for a long time before their populations get access to these vaccines. Meanwhile, the rolling out of the vaccine is slowed down not just by governmental incompetence but also by patents that prioritise -as is usually the case in capitalist society- profit over human life.

A nationalist war over vaccine distribution is raging between the affluent countries of the global North.

In this respect, the current pandemic is only the latest example of the capitalist destruction that my book analyses. Tracing this destruction to the way capitalism uses the surplus it extracts from workers, I argue that reversing this situation presupposes an end to class exploitation and, thus, a society that allows democratic control of the surplus by the workers who produce it. Since such democratic control is inconceivable as long as racial, gender and other forms of social oppression persist, abolishing them would be as central a goal of such a society as abolishing class exploitation.

The devastation created by the current pandemic has already inspired millions of people around the world to mobilize against unsafe working conditions, hunger, structural racism, sexism, and so on.  Some commentators have detected in these uprisings a revolutionary potential. Sympathetic as I may be to such optimism, I would also point to all the obstacles to a unified anti-capitalist coalition that my book also analyses. Only by overcoming these obstacles daily generated by capitalism’s operation will the movements sparked by the pandemic’s destructive legacy ensure that this optimism does not prove to be little more than wishful thinking.

Costas Panayotakis is Professor of Sociology at the New York City College of Technology at the City University of New York.

The capitalist mode of destruction by Costa Panayotakis is available now in paperback, hardback & ebook formats.

Part of our Geopolitical Economy series.