In the 1961 Romanian socialist realist film, The man next to you (Omul de lângă tine, director Horea Popescu), Corina, a city girl and lawyer accustomed to urban living, renounces her life in the capital to join an engineer who works on a construction site. Her fashionable silhouette, which embodies a desire for trendy commodities, changes when she becomes a piece in the larger collectivist assemblage that produces socialism. If one would deploy the analytic of gender to make sense of Corina’s desires, one would erase the communist ideal of abolishing capitalist life and sexuality that is part of the film’s history. 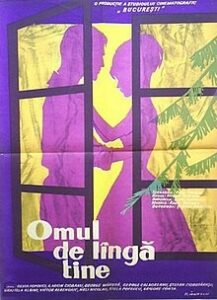 While gender identity can reveal a structure of inequality that was present at the heart of State socialism, the problem with this theory is that it eliminates the Marxist epistemological assumptions about communist bodies. In turn, to rehistoricize socialist histories, I draw on the concept of productive bodies to excavate a rival theoretical view of sexuality. Rather than acquiring a gender identity, be that male or female, communist bodies were seen by socialists as comrades on the path to destroy an economic system such as capitalism. If queer studies commonly trace their genealogy to Foucault and the rise of queer at the end of the 1980s, this study offers a materialist history that places the emergence of gender during the Cold War and its competition with a socialist conception about bodies and sexuality. The book derives its energy from a suspicion that queer theory’s terminology is a device to universalize a US- led production of epistemic categories, which has elided other critical traditions that oppose the ideology of market economy. In recovering a communist vision about sexuality, I work with socialist theory and eastern European Marxist films because they offer an alternative standpoint to understand the vocabulary of contemporary queer theory. This is why I ask: How was a specific Marxist understanding of bodies and sexuality erased during the Cold War? The second question follows the consequences of this erasure, but focuses on the post-Cold War period: If queer theory was a participant in the elimination of a communist sexuality, what alternative analytic can be forged to reinsert historical materialism into a queer anti-racist scholarship? 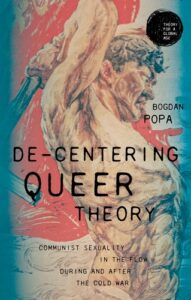 The book not only offers a historical narrative about the transformation of gender during the Cold War, but also seeks to dialectically introduce Marxist epistemology in queer studies. In doing so, the book presents two main novelties to the current literature. First, it theorizes the production of a different conception about sexuality and bodies in Eastern Europe, which I call “the productive body” and is based on a communist epistemology that draws its resources from Marxist theory. Communist figures in socialism were neither individual territories of freedom, nor subjectivities who fought against the conformism of an established ideology. I discuss how early Marxist films emphasized a productivist body that is not individualistic, but the unfinished product of a collective and dialectical process to achieve communism. In opposition to this productive body, the concept of gender was articulated in the mid-1950s United States to distinguish between a biological body and its cultural/social understanding, and drew its logic from social constructivism. The theory that utilized social construction and identities as key analytical tools was a dominant anti-communist social science program, which was put forward explicitly as a competitor to Marxist-Leninist science. To show the importance of the productive body, I undertake a historical investigation to show that anti-communism was foundational to the emergence of gender and queer theory. I focus on three key historical moments: the productivist Marxist aesthetic in the early Soviet cinema of the 1920s (Chapter 2), the emergence of the competing analytic of gender in the 1950s USA (Chapter 3), and the relation between the new poststructuralist theories of sexuality in the USA and Marxism at the end of the Cold War (Chapter 4).

Second, the book suggests that a Marxist epistemology can enrich various queer intersections such as the abolition of gender, the materiality of queerness, the conceptualization of the unconscious and the historicity of trans studies. In Chapter 5, I propose to take the ideal of abolition seriously as a common project of Marxism and queer theory. I claim that Stalinist art is a refusal of capitalist codes about gender and sexuality according to a global Anglo- American imagination. In rearticulating an abolitionist imagination of capitalism, socialist films can generate a new imagination of the future. I identify common themes between Boris Groys and José Esteban Muñoz’s theories: if socialist realist artworks function like a contemporary avant- garde, not unlike queer performances of color, they can help de-naturalize the normative performances of the body. In Chapter 6, I argue that socialist objects, which I call counterfetishes, can offer a new type of materiality to queer theory. The dis-connection of a commodity from labor and its material production has served as an important site for Marxist critique, particularly in the case of sexual identities. My claim is that Marxist counterfetishes, which are objects that are produced within a socialist system, point to a materiality based on needs that can reinfuse queer of color theories, in particular José Esteban Muñoz’s and Fred Moten’s work. 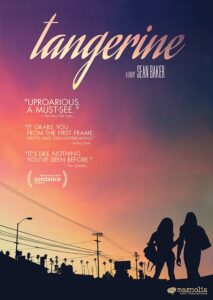 A poster for the 2015 film, Tangerine

In Chapter 7, I draw on Soviet Marxist theorists such as N. Y. Marr to conceptualize the unconscious as having a class character. To reintroduce Soviet Marxism in queer psychoanalytic debates, I conceptualize unconscious productions such as dreams and sexual desires as guides and instigators of social revolts. Last but not least, in Chapter 8 I show that the introduction of a Marxist historical method in transgender studies highlights the connections between trans people and postsocialist emigrants in the USA. As an example, I analyze films such as Tangerine that raise the question of potential alliances of trans subjects of color with racialized eastern European migrants. The final section, Chapter 9, offers a short conclusion about the future of queer communism. By comparing and contrasting my study with previous scholarship, I argue that queer communism offers not only a distinct Marxist archive but also a dialectical vision of history. Rather than looking at queer studies as an interruption in the history of human emancipation, I see it as an important part of this process.

Bogdan Popa is a Senior Researcher at the Center for Cultural Innovation and Creativity, Transilvania University of Brasov.

De-centering queer theory: Communist sexuality in the flow during and after the Cold War is available now.

Part of our Theory for a Global Age series.