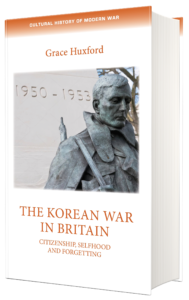 In writing this book and explaining the Korean War’s impact on British life from 1950, I was inspired by other social histories of warfare in the twentieth century. Joanna Bourke’s Dismembering the Male, Lucy Noakes’ War and the British, Susan Carruthers’ Cold War Captives, as well as classic texts such as John Keegan’s The Face of Battle and recent exciting work on the history of prisoners of war, all shaped my thinking in a powerful way. I am also always inspired by Margaret Atwood’s moving poem, ‘The Loneliness of the Military Historian’ which brilliantly sums up the life and task of the female historian of war (and awkward conversations at dinner parties).

My research took me to archives and libraries across the UK and North America. Many of these were major national library and archives, but I also visited a range of smaller regimental museums in the UK too. These archives were full of wonderful material and I was fortunate to meet many expert curators and archivists. I also travelled to several Korean War memorials in the UK.

What I enjoyed most I suppose was piecing everything together – I had archival, written and spoken material from all sorts of places to get a sense of the overall impact of the Korean War on Britain. I particularly enjoyed reading Mass Observation responses (which I explore in Chapter 1), which showed how ‘ordinary’ people responded to the outbreak of war, coming just five years after the end of the Second World War. The responses to the war were varied and in many cases astonishing. I also really enjoyed sharing some of my archival material and ideas with colleagues and Bristol History students, which sparked many interesting conversations about the Cold War, history-writing and the limitations of using terms like ‘brainwashing’ today.

Researching war and conflict can uncover both moving and shocking histories. Listening to oral history testimony, reading letters between loved ones and looking up casualty figures were all sobering and emotive experiences for me as a historian. Korea was a particularly destructive conflict, for all those involved, and writing this history could be challenging at times.

Yes, this is my first published book – I am thrilled to have a book of my own on my bookshelf!

MUP History boasts some of the best sub-series in modern history-writing and I was particularly keen to publish with the Cultural History of Modern War Series. Not only has it published seminal texts such as Michael Roper’s The Secret Battle: Emotional Survival and the Great War, but it also contains fascinating recent research on the environmental history of war, disability and rehabilitation after war, and case studies on the Home Guard and Special Operations Executive. So I really wanted my social history of the Korean War to be part of such a vibrant series.

In researching this book, I found that many of the servicemen sent to Korea were not setting off from the UK, but from Germany. The British bases in the North West region of Germany formed the central point of a constellation of British military bases across the world. My next project then will be looking at the social history of these bases in more detail, asking what sort of communities they were and how a range of base residents (from service children to teachers) lived with the uncertainty of the Cold War and global politics after 1945. Its central methodology will be oral history and I am very excited to speak to former residents of these bases about their experiences, particularly as many of these bases are closing in 2020. 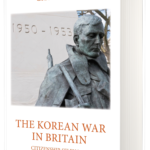 The Korean War in Britain is available now! Read a sample chapter, here.