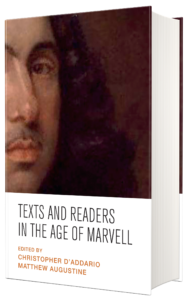 A recent collection that we enjoyed and learned from and that gave us a template for some of the things we hoped to accomplish in our own volume is Rethinking Historicism from Shakespeare to Milton, edited by Ann Baynes Coiro and Thomas Fulton. The essays are really lively and various and they’re presented by the editors in a way that directs and amplifies their collective energy.

Certainly the book took us to some unexpected places – indeed, in the course of writing, a few of the essays shifted in focus, which led to some initial consternation. But this had the effect, ultimately, of revealing to us the book’s theme, the somewhat counter-intuitive ‘Age of Marvell’.

MCA: This is a very meaningful book for me, and for many of our contributors, in that it’s dedicated to a scholar in Steven Zwicker who has contributed very widely and variously to the field of early modern studies, and it’s been a lot of fun to see how our team has answered some of the challenges his work poses, and how they’ve engaged with and sought to move beyond the current state of the field.

CD: Easily, the opportunity to read, contemplate and respond to the work of scholars whom I admire greatly and look to for inspiration. The essays that appear in this volume represent a set of disparate but complementary approaches and I found it incredibly stimulating to see so many methodologies at work to help push our ideas about seventeenth-century authors both familiar and unfamiliar. The variety of approaches was especially nice to see because it shows demonstrably the wide-ranging influence of Steve to the study of seventeenth-century literature.

Completing the book has been difficult for some of the same reasons it’s been enjoyable!

Chris’s first book is Exile and Journey in Seventeenth-Century Literature, which came out in 2007; Matt has just published a book called Aesthetics of Contingency: Writing, Politics, and Culture in England, 1639-89 with MUP.

Well, in terms of seeing this book published, we felt pretty gratified – we think it contains some tremendous work.

MUP has an established track record of publishing books on politics and culture in early modern Britain, so we’re delighted to see this title added to the Press’s catalogue.

Collaborations are always unique – we learned a lot from our contributors, and we had to navigate working virtually, for the most part. We were able to meet occasionally at the Folger Library in Washington DC, but the rest of the work was done across an ocean and five time zones.

CD: I’m currently working on a study of urban aesthetics in early modern London at the turn of the seventeenth century. My project is interested in tracing the advent of a distinct aesthetic mode in response to the immediate realities of the rapidly changing metropolis, a response encouraged further by a growing scepticism over received ways of perceiving the sensory world. In limning this new aesthetic, I argue for a new definition of what we broadly call the metaphysical style, one that sees its presence across a number of genres, not just lyric, but the prose pamphlet and verse satire, and employed by a number of authors, John Donne, of course, but also Thomas Nashe, John Marston, and the diarist John Manningham.

MCA: I’m working on a ‘literary life’ of Marvell, which I hope will be out in time to mark his four-hundredth birthday in 2021.

Texts and readers in the Age of Marvell is available to pre-order now!