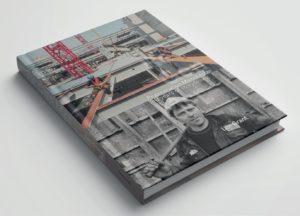 s Len Grant has documented the changing face of Manchester and Salford. Through his photography, writing and, most recently, his sketches, he’s told stories of significant regeneration projects, from the construction of The Bridgewater Hall and The Lowry, to the beginnings of Mayfield’s revival. In his retrospective book, Regeneration Manchester, 30 years of storytelling, he brings it all together in one volume.

For our blog, he comments on some of his favourite images. 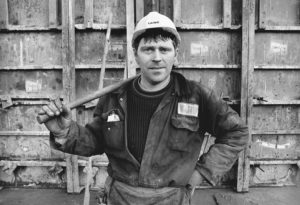 At the time, maybe 1994 or 1995, I was heavily influenced by the work of Brazilian photographer Sebastião Salgado. One of the Sunday supplements – before celebrity profiles had elbowed out social documentary features – had published his incredible images of the Serra Pelada gold miners. Beautiful black and white images of semi-clad, mud-drenched men clambering up narrow ladders made for near-biblical scenes of poverty and optimism.

His long time project in the early 90s – Workers – featured workers around the world, buildings ships, catching tuna, harvesting tobacco. I was very much inspired by the subsequent book and would take portraits on both the Manchester Arena and The Bridgewater Hall that tried to emulated his approach. This one, my favourite, of a worker on the site of The Bridgewater Hall become know to me, at least, as my Salgado portrait. 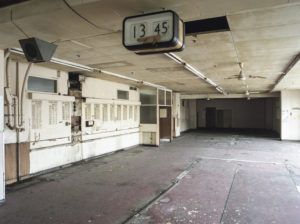 I’m known for my people pictures. Yes, I’ve photographed the regeneration of Manchester for 30 years so there have been lots of cranes and diggers but it’s been the people that have been my focus. So this choice of the deserted newsroom at soon-to-be-demolished Maxwell House might seem an odd choice.

I toured the former printing complex – within a couple of years the site was converted into The Printworks entertainment centre – with a retired Daily Mirror news editor. “Here we are, home is where the heart is. This was the newsroom, our newsdesk was there. I’d sit here, my deputy opposite me. I’d have an assistant there and the Irish editor and picture desk would be over there. The reporters’ benches were all along the back.

“We’d watch that clock all day, especially if you were having a tough time. It used to tick, tick, and drop over. It was the focal point of the room really. I’d be watching from my desk, the reporters would be watching it, the chief sub, the night editor, everyone.”

So, really, this photograph is absolutely teeming with people. 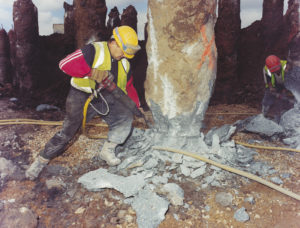 Loping the tops off foundation columns at the construction of The Lowry. It looks incredibly hard work and you can practically hear the roar, and feel the vibrations, of that pneumatic drill. I had it easy on building sites. I’d often stand and watch for a little while, working out who was doing what and what was about to happen. There was little physical exertion apart from maybe having to climb several storeys of ladders before stairs were built.

It had been the architects’ aspiration that the arts centre was visible as you approach by car or on foot from Trafford Road. Visitors would become excited as they got ever closer to this shimmering steel edifice at the end of Pier 8, its curved entrance canopy inviting them in. Sadly the financial realities thwarted the ambition and a shopping mall was built in front of The Lowry, the revenue from which helped the sums stack up. 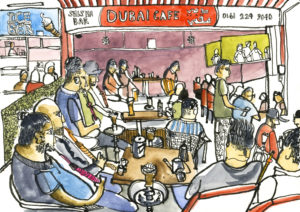 In 2013 I started to sketch. It seemed a natural extension to my storytelling and I was lucky enough to persuade some of my clients to commission sketching as an alternative to photography. But, as I had always done as a photographer, I was keen to embark on a personal, non-commissioned project through which I could showcase my approach.

At the end of 2017, it dawned on me that Rusholme, the vibrant neighbourhood I often cycled through, would make a great subject for a long term sketching project. So, for the next 12 months or so I’d sit on the pavement on my stool, or in the cafés and sheesha bars, drawing what was in front of me. It was a wonderful experience that was portrayed, first in a blog and then in a self-published book, The Rusholme Sketcher. 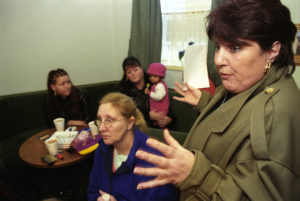 Some think New Islington, the new neighbourhood next to the historic mills of Ancoats, was somehow named after the significantly more upmarket London district. Not a bit of it. There was a street on the old Cardroom estate called New Islington and a Victorian swimming baths and washhouse of the same name. All now demolished.

I was fortunate to have been commissioned to document the very beginnings of this new area of town. Twenty years ago it was a rundown council estate with a strong community who had ties with Ancoats over generations.

Early on, the lead developer organised a series of Sunday afternoon consultations in a local pub. Fraught to begin with, those discussions became more productive as trust was built and residents could see progress being made. 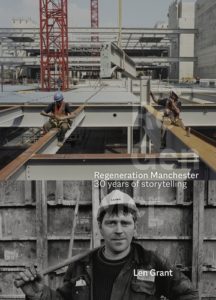