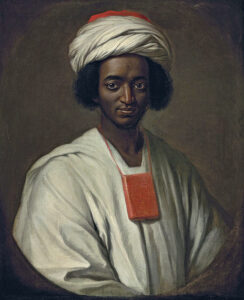 In 2010, the National Portrait Gallery solicited more than half a million pounds through campaigns and grants[1] in an effort to retain a portrait and stop it being exported to Qatar (despite Qatar Museums Authority having purchased the portrait in 2009). However, after the money was raised to buy the work back, the owners agreed to lend it (for five years) to the Gallery instead.[2] Who was the portrait of? Why was it so significant? And what do the efforts to keep it in England suggest in light of Black History?

Ayuba Sulaiman Diallo – also known as Job Ben Solomon – was born in 1701 and hailed from a prominent Muslim family of the Fulani people in the West African State of Bundu, located today in East Senegal. Growing up, he studied under his father, Sulaiman, a notable Muslim scholar. Ayuba went on to work as a religious guide as well as a trader and businessman.

It was during one of these business trips to neighbouring territory that, to his surprise, Ayuba was captured and sold into slavery. Although he tried to communicate who he was, help did not arrive in time – and so the ship set sail.

Once the ship reached Annapolis (present-day Maryland), Ayuba was sold along with other enslaved people, and was set to work on a tobacco plantation. However, this was not a life that Ayuba was used to – or had any experience in – and he found the work very difficult. In fact, Ayuba was likely more acquainted with the enslavers, with some accounts indicating that his family were involved in the slave trade themselves.

Desperate to flee, Ayuba somehow managed to escape from captivity. However, as he could not account for himself, with no one and nothing to prove who he was, Ayuba was imprisoned. And it was while imprisoned that he encountered an English priest – Thomas Bluett – who recognised that he was ‘no common Slave’:

Upon our Talking and making Signs to him, he wrote a Line or two before us […] [we] could not imagine of what Country he was, or how he got thither; for by his affable Carriage, and the easy Composure of his Countenance, we could perceive he was no common Slave.[3]

Through this fortuitous encounter, Ayuba regained his freedom: he wrote a letter in Arabic to his father, which exchanged a few hands and was eventually translated and found its way to James Oglethorpe of the Royal African Company – and so Ayuba was freed from bondage.

In 1733, Ayuba boarded a ship to England, where he resided with Thomas Bluett for some time.  Ayuba became a member of the Gentleman’s Society of Spalding, and his knowledge of Arabic led to him translating from Arabic into English for Sir Hans Sloane.[4] With Ayuba’s help, Sloane – a renowned physicist – was able to rearrange Arabic manuscripts at the British Museum and translate Arabic coin inscriptions. In July 1734, Ayuba boarded a ship to his native Bundu, where he stayed until his death in 1773.

Most of what we know about Ayuba’s life comes from Thomas Bluett, who wrote an account of Ayuba’s life (Some Memories of the Life of Job) under Ayuba’s instruction, as well as Francis Moore’s Travels into the Inland Parts of Africa. Ayuba’s was one of the first biographies of a former enslaved person to be written in English, and is suggested to mark the beginning of this genre of literature.

The purpose and impact of the accounts of Ayuba’s life is an article for another day (including the choice of the English version of his name – Job), but for now let us return to William Hoare’s portrait of Ayuba, painted in 1733. The National Portrait Gallery’s caption of the portrait on their website exults:

Hoare’s sensitive portrait is the earliest known British oil portrait of a freed slave and the first portrait to honour an African subject as an individual and an equal. The portrait provides a fascinating insight into the eighteenth-century English response to other peoples and religions.[5]

Ayuba’s portrait is said to celebrate his identity: he wears traditional dress, including a turban, and has a copy of the Qur’an around his neck (‘at the sitter’s own request’). And yet, this dress shows his wealth and status – the ‘exotic rich silk cloth’ was likely funded by the same supporters who arranged his portrait. As to how far it ‘provides an insight into the eighteenth-century English response other peoples and religions’? I think it takes more than an oil painting.

On the whole, though, we are presented with someone who looks stately and majestic; the portrait emanates a positive message: we see dignity, pride and freedom. But how far is this popularised and sought-after image an appropriate way to memorialise slavery (especially if Ayuba himself may have been involved in the slave trade)? What of the millions who were not of noble birth; who could not read or write; who did not manage to escape or be freed of bondage? Of course, Ayuba’s story is notable and his achievements, particularly in England, significant. But the question of how much (and how conveniently) he is a token persists.

With this in mind, let us end with Ben Okri’s sonnet, Diallo’s testament,[6] penned as a response to the painting of Ayuba.

Who can read the riddle of life in this portrait?

Bluett, Thomas (1734) Some Memories of the Life of Job, the Son of the Solomon High Priest of Boonda in Africa; Who was enslaved about two Years in Maryland; and afterwards being brought to England, was set free, and sent to his native Land in the Year 1734. Available from http://docsouth.unc.edu/neh/bluett/bluett.html (accessed  4 October 2021).